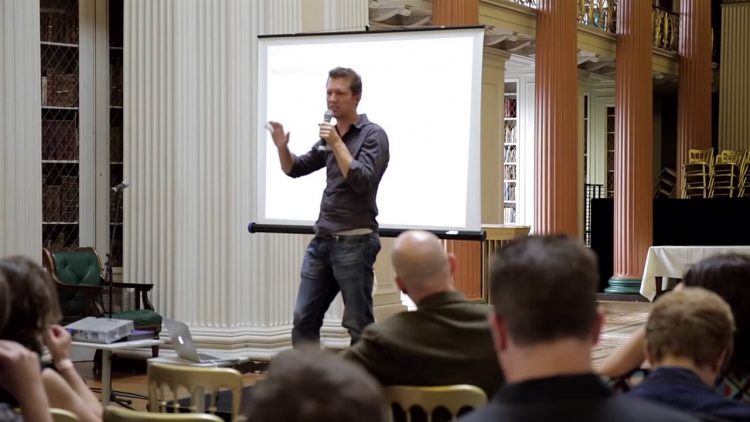 Mike Hearn, a former Bitcoin Core developer who moved to R3, has confirmed that newly revealed e-mail exchanges with Satoshi Nakamoto, bitcoin’s inventor, were shared by him.

The exchange starts on April 12th 2009, shortly after bitcoin was released in January of that year. Mike Hearn is curious about the invention and asks a number of questions, including how the system would scale. Nakamoto says:

“By Moore’s Law, we can expect hardware speed to be 10 times faster in 5 years and 100 times faster in 10.  Even if Bitcoin grows at crazy adoption rates, I think computer speeds will stay ahead of the number of transactions.”

The e-mails don’t reveal much that wasn’t previously publicly said, but do add some more detail. Regarding the 21 million limit, for example, he says it was an educated guess so that it’s not too high if it lacks adoption and it’s not too low if it finds high usage.

Despite bitcoin’s considerable price increase, that has not happened. There was a push for it in 2014, but it seemingly failed as exchanges and businesses did not adopt the suggestion.

In further statements, Nakamoto says client only mode for nodes is key to scaling the system as then everyone can connect through a mobile wallet. He says:

“A higher limit can be phased in once we have actual use closer to the limit and make sure it’s working OK.

Eventually when we have client-only implementations, the block chain size won’t matter much. Until then, while all users still have to download the entire block chain to start, it’s nice if we can keep it down to a reasonable size.

With very high transaction volume, network nodes would consolidate and there would be more pooled mining and GPU farms, and users would run client-only.  With dev work on optimising and parallelising, it can keep scaling up.

Whatever the current capacity of the software is, it automatically grows at the rate of Moore’s Law, about 60% per year.”

He then provides the code for how client-only nodes can be implemented, with Mike Hearn following on actual execution, releasing the first, what are now called, SPV wallets, light wallets, or, usually, just a bitcoin wallet.

Nakamoto also suggests he was working on what could be called bitcoin apps. He was trying to create an e-bay like version, but with bitcoin, as well as other like apps.

The reason, he says, is because he wanted to ensure the software can handle all sorts of uses, including widespread commerce. He says:

“I was trying to implement an eBay style marketplace built in to the client. Publish/subscribe would be used for broadcasting product offers and ratings/reviews. Your reviews would be weighted by the blocks you’ve generated…

It was part of writing code to explore the most technically demanding use cases and make sure Bitcoin could support everything that might be needed in the future, given the locked-in nature of the rules once the block chain started.”

It’s something that OpenBazzar sort of implements, but for its use to be convenient, 0-confirmed transactions are important. That is, instead of waiting 10 minutes for a block, it would be nicer if there was some method by which the merchant can be pretty sure the payment you sent can be instantly accepted with chances of double spending being minuscule. Nakamoto says:

“Currently, businesses accept a certain chargeoff rate.  I believe the risk with 1 or even 0 confirming blocks will be much less than the rate of chargebacks on verified credit card transactions.

The thief would not be able to broadcast during the monitoring period or else the merchant’s node would receive a copy.  The merchant would only have to monitor for a minute or two until most of the network nodes have his version and it’s too late for the thief’s version to catch up and reach many nodes.

With just a minute or two delay, the chance of getting away without paying could be made much too low to scam.  A thief usually needs a high probability of getting an item for free to make it worthwhile.  Using a lot of CPU power to do the brute force attack discussed in the paper in addition to the above scam would not increase the thief’s chances very much.

He later publicly says that “if a double-spend has to wait even a second, it has a huge disadvantage.” He was proven right when companies like BitPay and Coinbase started employing the method to accept immediate bitcoin transactions, otherwise called 0-confirmed due to no mining block confirmation.

They reported no problems for years of 0-confirmed transaction usage, with double spends near zero. However, the Bitcoin Core projects implemented Replace-by-Fee (RBF) which allows anyone to double spend by simply increasing the fee.

RBF is considered to be a protocol bug by many, so Bitcoin Cash has removed it, re-instating instant 0-confirmed transactions.

The shared e-mails seem to mainly concern scalability, so we e-mailed Mike Hearn to ask whether he had kept up with recent developments in bitcoin and whether he intends to return back to bitcoin coding.

His reply was short. After confirming the veracity of the e-mails, he said “I do not plan to return to Bitcoin.”

He left back in 2015 after being smeared in a propaganda campaign by numerous Bitcoin Core developers, including Peter Todd (who strongly pushed for RBF and finally succeeded in merging it in Bitcoin Core) and Gregory Maxwell, who disagree with Nakamoto and are of the view that bitcoin does not scale.

Publicly, Hearn said earlier today: “There is no significance behind timing. I thought these emails had been published already, because I had forwarded them to a project that was archiving Satoshi’s emails years ago. When CipherionX asked me for these emails again, he told me they’d actually never been uploaded anywhere and so I forwarded them once more.”

One interesting revelation may be the date of the very last e-mail received by Nakamoto. It wasn’t publicly known before, but now we can say it is probable that no communication was received by Nakamoto after 23rd of April 2011, that’s around four months after his last public statement on or around 11th December 2010. He says:

“I’ve moved on to other things. It’s in good hands with Gavin and everyone.

I do hope your BitcoinJ continues to be developed into an alternative client. It gives Java devs something to work on, and it’s easier with a simpler foundation that doesn’t have to do everything. It’ll get critical mass when impatient new users can get started using it while the other one is still downloading the block chain.”

It is probable that after many in the bitcoin community back then tried to push bitcoin as a method of donation for Wikileaks, which had been cut off the banking system, Nakamoto may have seen the project as going in a different direction than he hoped.

In his public statements he usually focused on ordinary, mainstream, users, with his tone sometime even excited in suggesting many ways bitcoin could be made more convenient or useful for commerce or other things.

However, the connection to Wikileaks at such an early stage, at the height of what could be called public resistance against the Iraq war, probably gave bitcoin a very different dimension.

He probably would have been aware of the imprisonment of other centralized project leaders, such as Liberty Dollar. So he did not mince his words nor hide his intention for leaving in what can be called the last public statement where he says the US government was headed towards bitcoin.

He was proven right to some extent because Gavin Andresen received a request by the CIA to speak with them, something which Andresen publicly revealed on April 27th 2011. Bitcoin was on the radar, so Nakamoto left.

Things could have, at that point, developed in many ways. The way they did develop was an explosion in popularity between December 2010 and April 2011.

The latter is probably around the time most tech geeks learned about the project, with it gaining significant attention on Hacker News and other fora, with its price surpassing dollar parity and then rising to a high of around $30.

Bitcoin had taken a life of its own and there was nothing anyone could do about it. Now, there are thousands of bitcoins, with the millennial generation in particular flocking to it.

This space is booming. The underlying tech might even bring forth an industrial revolution, so said the current Chancellor of the Exchequer. Its use and application is being contemplated in every industry imaginable. Central banks are racing to employ the technology. Nations are engaged in jurisdictional competition for blockchain talent and businesses. From Putin to Macron, being seen with Buterin or a Ledger Nano bitcoin wallet is now huge PR.

They all see it is a better way of doing things and they even want to encourage it because blockchain technology is a very 21st century technology.

Just as time marches, so does human ingenuity and innovation. Our ancestors had stones, gold, and paper money. We have digital currencies.

Money we code by if and then to do things automatically so that we can better handle the ever increasing complexities, freeing our time for matters that require lateral thinking.