Dubai to Launch a State Issued Blockchain Based Digital Currency 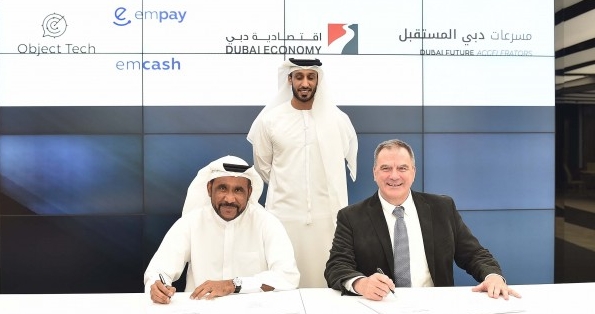 Dubai’s government is to launch a cryptocurrency following a partnership between Emcredit, a subsidiary of Dubai’s Department for the Economy (also known as Dubai Economy) and a UK based blockchain start-up called Object Tech Grp.

The new “encrypted digital currency,” called emCash, will be based on the latest blockchain technology, Dubai’s economy department says in a statement, and will be usable through emPay, a wallet launched by Emcredit to support contactless payments.

Dubai’s citizens will be able to pay “for various government and non-government services” with emCash, “from their daily coffee and children’s school fee to utility charges and money transfers,” they say. Ali Ibrahim, Deputy Director General of Dubai Economy, stated:

“A digital currency has varied advantages – faster processing, improved delivery time, less complexity and cost, to name a few. It will change the way people live and do business in Dubai, and mark a giant leap for the city in harnessing game-changing innovations to improve ease of business and quality of life.”

No detail is provided regarding what blockchain technology will be used exactly or how emCash will be set up, but they make it clear this is in effect a state backed cryptocurrency with Muna Al Qassab, CEO of Emcredit, saying:

“Customers can choose between two payment options on the emPay platform – the existing dirham payment or emCash. While the dirham payment goes through normal settlement procedures, intermediaries and costs, emCash payments are settled directly between the user and merchant. emCash thus gives real time value movement and merchants can pass the cost benefit to the emCash holder. It also reduces fraud as well as inflation since currency is issued in real time based on actual demand.”

He further added that “the blockchain technology deployed allows for distributed and shared ledgers so that control over payments is not limited to any single member in the emPay ecosystem and transactions are recorded instantaneously.”

Which all suggest Dubai has taken a very bold step, moving forward with the deployment of blockchain technology to the country’s money itself, something echoed by Tom Morgan, Co- Founder of Object Tech Grp, who says:

“The fast paced environment and incredible willingness to adopt innovative technology has made Dubai the perfect place for us to do business. This project is a great example of the ambition we have met here, together we are essentially creating a whole new economic ecosystem. It will harness blockchain technology to make financial transactions, cheaper, faster and more secure while demonstrating the huge advantages of embracing this technology for governments, business and customers alike.”

The very rich, tiny, Arabian nation is in fierce competition with some of Asia’s tigers, such as Hong Kong and Singapore. The latter has tokenized their dollar through an ethereum private blockchain, but it’s implementation in live production maybe be still some time off. While Hong Kong is pouring money towards blockchain technology.

They’re all in a race of sorts to attract blockchain talent and businesses as well as maintain or gain positions as a go to hub in the region with blockchain technology specifically and fintech more generally seen as one of the most promising fields.

But Dubai appears to be going further than anyone else, with their government department so closing their announcement statement by saying:

“Together, Emcredit and Object Tech will develop a competitive, accountable and legally compliant emCash ecosystem. A number of associated products to protect emCash wallet and digital documents, enable direct real-time settlement and peer-to-peer lending, and provide credit rating based on the distributor ledger of emCash will also be developed.”

With the vision seemingly being one of the complete financial system running on blockchain technology, from payments, to lending, to even digital documents. Something which other jurisdictions most probably will keep a very close eye on, to see how it all develops in practice.