Bitcoiners Angry They Getting “Free Money” 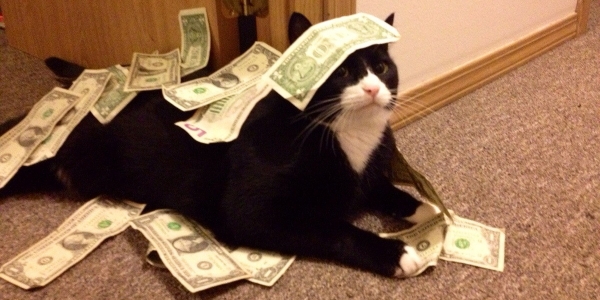 In some parts of the bitcoin space, there is little discussion other than 1x or 2x. With back and forth bickering endlessly continuing as if a 1MB difference is of such importance to the point they actually really think anyone actually really cares whether bitcoin handles 1Mb or 2MB of data.

But this 1MB difference appears to be fundamental to some. To the point a number of current or former blockstream employees have said they’ll quit if the bitcoin network dares handle 2MB.

What exactly they’ll quit they haven’t quite said. We doubt they are referring to their own cushy jobs, but at least that’s a peaceful exit. Some, however, want to take the matter to court.

Like Henry Brade [[[NO2X]]] who said: “If 2X proponents try to take the BTC ticker, they will get sued to oblivion.”

Please let it be in London courts because we want to see the judge’s bemusement, starting with his efforts to establish how exactly does a state court have any jurisdiction over a decentralized currency or its governance.

But at least Brade might actually believe in whatever he says. Doubt the judge will constrain his laughter, however, when a posh barrister tells him Adam Back, Blockstream’s CEO, actually signed for 2x in 2016.

As did Matt Corallo, your honor. And Luke Dashjr. And Peter Todd. And Cory Fields. And Johnson Lau. So being at the Hong Kong meeting as representatives of sorts of Bitcoin Core and so voluntarily agreeing to 2x.

Now, some of them, not all, but some of them, like Adam Back, Matt Corallo and Luke-Jr, want us to believe the exact proposal they signed up to is actually the very end of bitcoin.

You can say it is not funny as much as you please, but it is hilarious. So no wonder no one really cares about 1x or 2x. What everyone seems to care about, instead, is this “free money.”

Oh, no, he broke the meme! How on earth can anything not be good news for bitcoin Ratcliff? Ask ethtraders! They furious bitcoiners are getting “free money” and they certainly think all of this is actually good news™.

They couldn’t believe bitcoin’s price is rising because of some “free money,” while eth there upgrades uncontroversially through a hardfork, adding privacy and all sorts of stuff, while not even getting a mini eth they can all diss as uncool.

But, the question is, which one gets to be the “free money.” There are two contenders, bizcoin or Bitcoin Gold. With the ticker for Bitcoin Gold easy as BTG or BCG. But they haven’t yet allocated a ticker for bizcoin. BTZ or maybe BCZ?

The other one will, of course, be just bitcoin, with BTC. There can only be one of those. But which one? BCG or BCZ or BCH or the entire alphabet?

Well, we’ll keep you updated of course, as soon as we learn you’ll be the first to know. Not long to go now, just four weeks.

Soon, we should be hearing from businesses, the king makers. What BitPay and Coinbase call BTC of course matters greatly, maybe even decisively.

Bitfinex, which too signed the Hong Kong agreement committing to 2x, might do a uturn and list BCG as BTC if BCG does indeed end up being the minority coin.

However, they might be unable to keep that up because bitcoiners want to primarily trade bitcoin not BCwhatever. And what is bitcoin, in this case, will primarily be decided by the infrastructure.

Or will it? This will be only the third time a major coin has split. So we can’t really predict much at this stage. But this is the final showdown. The matter should, after this, be settled once and for all.

And the matter, although in some ways is over a tiny 1MB, is in some other ways a test of this concept that places an assumption of 51% of honesty at the foundations of the currency.

Now, it may well be easy to say that assumption stands regardless of the outcome. Not least because it has become obvious that capacity will increase both on-chain and off-chain.

It’s all a question of degrees and minute details. To that are added other considerations, such as a for profit company in effect controlling the one main bitcoin client. Power which necessarily they’ll abuse even if it is through good intentions.

But the alternative isn’t a lot better since bitcoin businesses have so far shown an inability to coordinate. Thus it may end up being just one of them taking the lead. Rather than they all paying one or two developers each.

And even if the latter was enacted, it may well be the case businesses may place short term interest above long term considerations. Making the 1x or 2x question a bit more complex, not least because Blockstream should take some responsibility for in effect holding the network hostage over the past year by allowing considerable congestion and an increase in fees to as high as $7.

As we have seen, the market has not cares because they know fully well this matter is a short term thing and capacity will be increased one way or the other. Growing pains, as they say.

Which reminds me of one of the most peculiar memories formed when I was around the same age as bitcoin is now. A new school had been built, which was slightly further away from my house, while the old school was next door.

My two sisters engaged in a fierce debate, rowing considerably, to the point of even little scuffles, on whether I should go to the old school or to the new school.

I believe I ended up going to the old school first, then moving to the new school a few months or weeks later, and then we moved town next year. With that storm in a tea cup having the sole effect of creating a memory and very much nothing else.

Bitcoin is growing and while now it’s still a small child where others make decisions for it, or so they think, it will too become a moody teenager and then a responsible adult with few caring about 1x or 2x, except, of course, the memory itself.