Polkadot ICO Raises $130 Million and it Has Only Just Begun 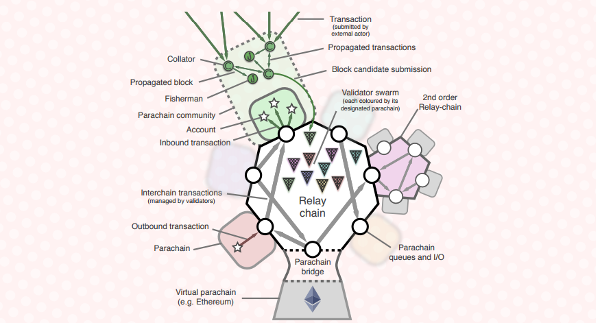 The Polkadot ICO, intended for interoperable blockchains, has raised $130 million in an on-going auction style ICO that has some 4.9 million, out of 5 million, tokens remaining.

To prevent someone from buying all the tokens in five seconds the ICO uses a complex method of increasing and decreasing market cap and prices over time. They say:

The minimum price increases with the amount of eth raised, while the maximum price is the price per token that would be paid if the market cap was reached now, which is practically impossible since the market cap is nearly half of all eth in existence.

The maximum price decreases with the amount of eth raised, with some 65,000 tokens already sold at this stage, leaving another 4.9 million more to go.

Much of the funds raised are to go towards the development of a new protocol that tries to allow different blockchains to communicate with each other. The pink paper says:

“Polkadot is a scalable heterogeneous multi-chain. This means that unlike previous blockchain implementations which have focused on providing a single chain of varying degrees of generality over potential applications, Polkadot itself is designed to provide no inherent application functionality at all.

Rather, Polkadot provides the bedrock “relay-chain” upon which a large number of validatable, globally-coherent dynamic data-structures may be hosted side-by-side. We call these data-structures “parallelised” chains or parachains, though there is no specific need for them to be blockchain in nature.

In other words, Polkadot may be considered equivalent to a set of independent chains (e.g. the set containing Ethereum, Ethereum Classic, Namecoin and Bitcoin) except for two very important points: Pooled security [and] trust-free interchain transactability.”

To achieve its aim the protocol has four main participants. Validators, which “seal new blocks.” Nominators, who contribute a security bond to “signal that they trust a particular validator.” Collators, who assist validators “in much the same way as miners do on current PoW blockchains.” And finally fishermen, who fish for any misbehaving party collecting rewards and act in a similar way to blockchain nodes.

Once finished, the system interconnects different chains, which would be particularly useful for connecting private blockchains with public blockchains.

The genesis block for Polkadot is expected sometime in 2019, so it might be more than a year before we see chains talking to each other, but once they do it might be one way of addressing scalability by in effect sharding the blockchain into many chains, while also addressing interoperability whereby customized blockchains talk to the main public blockchain.