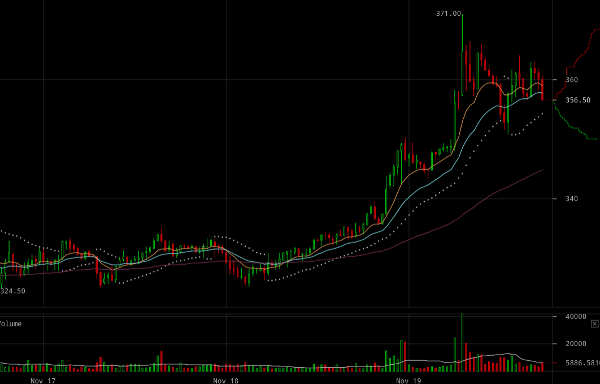 The second biggest digital currency is up more than $30 today, reaching a recent high of $371 before settling at around $360 at the time of writing.

Its trading volumes remain just above $1 billion, but its market cap has risen by above $4 billion, the same amount as the increase in the global market cap, suggesting the price rise is due to outside investors.

There has not been any specific news for this price rise, but the fact that it did rise is considerable and very significant news in itself.

That’s because ethereum has stayed at around $300 since September, with some jokingly calling it a stable coin.

It rose by around $30 just three days ago to $330, with it making another jump of $30 today to $360. So galvanizing some ethereans who now look at the all-time high.

That includes Mike Novogratz, a billionaire hedge fund investor, who said “ETH looks poised for a move to new highs. Lots of good news on the horizon.”

Good news has had little effect on ethereum for quite some time, with the currency consolidating for two months, but maybe that is changing. In which case, what might matter more is the good news it has ignored so far.

Such as the fact its transaction volumes have doubled to more than half a million. As the currency follows Metcalfe’s law of network effects, price might reflect it.

Moreover, while ethereum was within touching distance of overtaking bitcoin, it now has only 1/4th of its market cap. That’s despite ethereum handling far more transactions than bitcoin at sub-penny fees without congestion.

On top, the platform now has increased privacy through some zk-Snarks of sorts, while its proof of stake Casper is making some progress.

All of which might have not been reflected in price, not least because that tends to follow sentiment, and so far sentiment has been that bitcoin is running the show.

However, bitcoin has found some stability in the past two days, so it might give way, but whether it’s eth’s time to shine, remains to be seen.