US Treasury Secretary Compares Bitcoin to a Swiss Bank Account 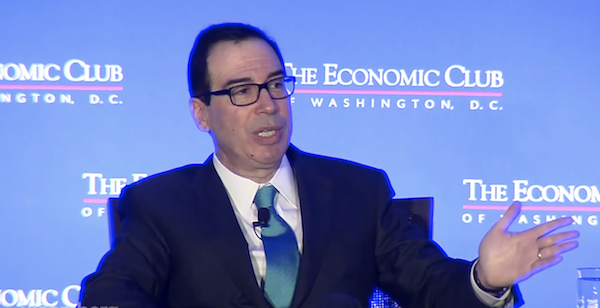 Steven Mnuchin, a former Goldman Sachs banker now Treasury Secretary, said that one of the things he will be working closely with the G20 is to make sure bitcoin does not become the Swiss numbered bank account.

He said there were two issues they were focused on. Firstly, was ensuring that “bad guys” do not use it and secondly the Treasury was concerned about “speculation.”

“In the United States, under our laws, if you have a wallet to own bitcoins, that company has the same obligation as a bank to know your customer,” Mnuchin said.

Indicating a potential lack of knowledge regarding how bitcoin works because no company issues them and you don’t need to register with any company to have a bitcoin wallet.

Firstly, bitcoins can be mined, with those coins not really going through any company. Secondly, bitcoins can be bought directly from other miners or individuals that have them and can be stored in a hardware wallet or software wallet that you just download without needing to sign up for anything.

The Secretary’s quote, thus, applies to only brokers and exchanges, like Coinbase, from which you can easily withdraw to your own non-KYC-ed hardware or software wallet.

Mnuchin further said: “We can track those activities. The rest of the world doesn’t have that, so one of the things we will be working very closely with the G-20 is making sure that this doesn’t become the Swiss bank account.”

Just how much they can track is unclear. It is probable they can de-anonymise ordinary individuals who might not care much about privacy, but actual bad guys might have quite a few options which take some effort to keep anonymity.

One of them is simply exchanging it to another crypto through non-kyced exchanges like Shapeshift or decentralized exchanges, making further tracking difficult. Something shown by the fact few have gone to prison for crypto crimes such as ransomware or even kidnappings.

Mnuchin further said the Treasury was worried about the levels of speculation and he is “concerned consumers could get hurt,” but is not at all worried about Russia potentially using crypto to bypass sanctions.

He said the FED had looked at whether to issue a digital dollar, but they do not see a need for it at this point and might be quite some way off.

The Treasury did not further elaborate on the G-20 point, but it does look like there might be global co-ordination on cryptocurrencies potentially as early as this year.

Yet how effective that would be remains to be seen due to potential jurisdictional competition for the limited talent and the billions of investment flowing into this space to fund innovative projects.