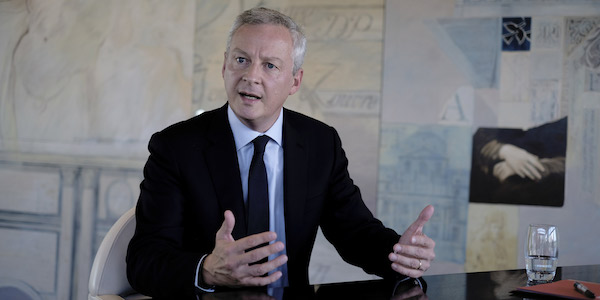 Bruno Le Maire, the French Minister of Economy, has strongly come out against this space today in a Press Conference, stating according to a rough translation:

“We want a stable economy: we reject the risks of speculation and the possible financial diversions linked to bitcoin,” Le Maire said before adding:

“I asked the Argentine G20 presidency to take up this issue and I have just entrusted Jean-Pierre Landau, former deputy governor of the Banque de France, with a mission on cryptocurrencies.”

Landau’s terms of reference are to propose “guidelines on the evolution of regulations” with the objective of better controlling “development and prevent their use for purposes of tax evasion, money laundering or financing criminal activities or terrorism.”

There is no indication whatever that criminals or terrorists prefer digital currencies to fiat currencies, especially considering the latter are way more fungible, liquid and accepted for payments of goods far more widely.

Le Maire, however, has not hidden his distaste for this space, stating back in December of bitcoin: “I don’t like it. It can hide activities… [and] there is an obvious speculative risk.”

Socialist France has found backing in Germany and Italy for a potential G20 co-ordinated crackdown on digital currencies.

The US Treasury Secretary, former Goldman Sachs banker Steven Mnuchin, also suggested recently there needs to be global co-ordination on blockchain innovation at a G20 level.

Mnuchin, however, is unpopular at the White House, with Vanity Fair stating “White House officials want Steven Munchin to mind his own damn business.”

France and Germany have been left behind in this crypto boom that promises new technological innovation through the digital revolution which upgrades paper to movable code.

Although German industry is advanced in some aspects in incorporating smart contract technology in particular, the French industry and finance is off the map as far as this space is concerned, with not one of our 1,000 articles or more covering any aspect of French industry because no news related to this space has come from that country.

This thus may be a ploy to chain their geographical competitors for their own strategic advantage, with France perhaps aware they are behind and aware the rest of their neighbors are racing ahead.

Yet instead of pouring resources towards innovation and declaring their country open for business they want to stop it under the guise of nonsense, with their argument at no higher level than terrorists drink water therefore let’s crackdown on drinking.

It remains to be seen whether the more advanced countries, such as the US in particular, and the UK, Japan, Australia, Switzerland, even Russia to some extent, as well as Estonia, can see through it at what might be the most historic G20 meeting of this century.

For geopolitical advantages and disadvantages will have to face off in what is effectively a cartel, at the same time as the baby boomer generation that sent us to war and bankrupted our countries now faces off with the millennial generation who can and even might vote them all out.