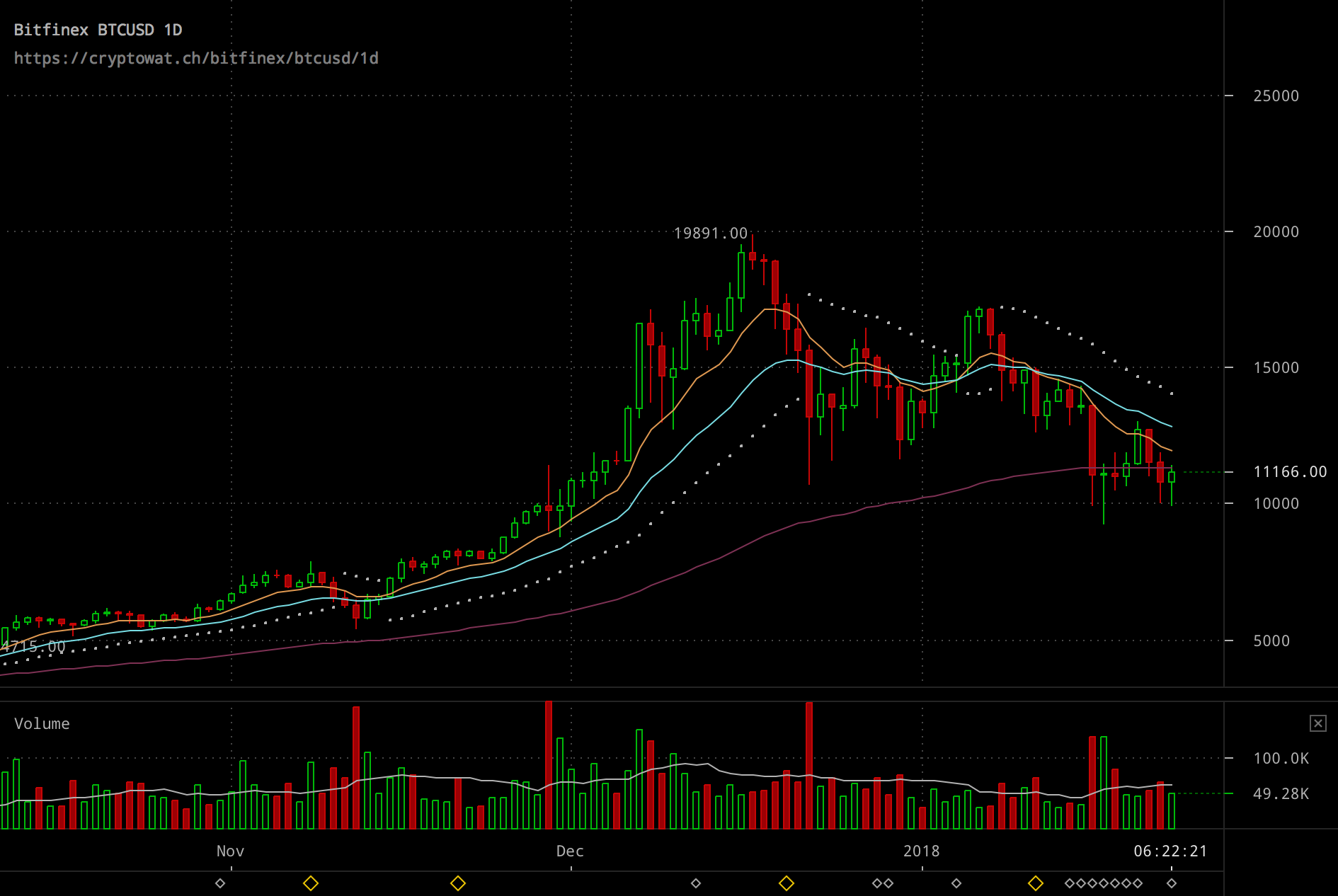 Davos. You can’t escape it. It’s everywhere. He said this, she said that. The rumor mill of the elite, hiding in some mountain under snow, away from the plebs, in case they come out with pitchforks.

“Cryptocurrencies and blockchain technology are talk of the town at #wef18,” Holger Zschaepitz‏ says. But the one panel dedicated to it is called Crypto Assets Bubble. Ha, typical.

No Putin there this year. Well, no speech anyway. With ISIS gone and hopefully terrism, it does feel like they’re looking for a new – well, old – enemy. The army wants your money, so they have to keep looking for ghosts. Afterall, we’ve always been at war with…

No Xi either. Maybe their Bitcoin ban has isolated that ancient land. Protectionists! It does over-all feel Davos is more getting back to its roots. Perhaps they’ve reached the acceptance stage regarding Trump.

He of course will speak there on Friday. After Merkel –  is she still running Germany? I mean, even Russia has had more leaders in the same time-frame – and after Macaroni, as well as the Maybot.

We probably will be missing a lot of what will go on under closed doors in this action packed week, but the official agenda has a lot of talk about a fourth industrial revolution. Yes, maybe it’s happening.

This is the table chat round-up of news not worthy of a full article, as maybe you figured out by the featured image. We speak freely here, under our own privacy, where defamation laws do not apply (we wish). Not that we are that mischievous, it is only press releases coming:

“America is the largest market for Bitcoin ATMs across the globe, with a total of 1352 machines. There are 2098 machines across the world.” Wow, we didn’t know that. Almost 1,500 ATMs in US? When did that happen? Why no one tell us!

“Coinsource, the world’s largest Bitcoin ATM network, has unveiled a new in-house software stack that will significantly improve the user experience at each of their nearly 200 machines across the nation.

“Play Labs @ MIT, a tech accelerator for upstarts that launched last year, [announces] that applications are open now until March 15 for the second batch of incubated startups to be held Summer 2018 on campus with the MIT Game Lab, with a focus on Blockchain/Bitcoin and eSports Technology.

Startups that are accepted into Play Labs will each receive an initial investment of $20,000 in either cash or Bitcoin in return for common stock. Startups that graduate from the program and meet certain criteria will be eligible for up to $80,000 in additional funding from the Play Labs Fund and its investment partners.”

One hundred grand. Not bad. Can almost buy a lambo for that. Anyway… now hopefully you’ll appreciate in this round-up we can’t undertake much verification. Maybe we should ICO and have more resources (joking, not gone happen), but until then do your own research, ok guys:

“Decentralized IT security marketplace PolySwarm today announced a Security Expert Bounty Program, which will reward participants in Nectar tokens (NCT) for uploading malware to the platform.

Polyswarm expects an average upper bound of 1,334 submissions per day, totalling approximately 64,000 files over the duration of the competition.”

Crowdsourcing the findings of malwares and viruses by rewarding with ICO tokens based on a global decentralized network that runs on the worldwide web. Yes, yes, it’s happening, move on:

While most iGaming ICOs and solutions are presented by newly formed companies, CashBet has been in business since 2012, supports over 450 games on its platform, and is venture-backed and profitable.

As the only crypto-casino platform licensed by the world’s most reputable tier 1 gaming jurisdictions, CashBet is fully committed to delivering an iGaming experience that is legal, safe, fun, and profitable.

This is just what we are told, ok. But obviously we’re not taking them off the street. There’s some implicit trust which leads to them being worthy of quotation even here, but yes, do yer own research because we won’t say it again.

Ah, now we kind of like this next one. We didn’t have time to get back to them for a bit more detail on what the ETF contains exactly, but perhaps we’ll find such time in a more slow news day:

Stockholm, ay, who would have thought. NYSE? Nope, cus bankers’ SEC. FTSE? Nope, cus probably no one has even tried. Sweden? Oh yes!

Now this next one, we’re just giving it away. Our competitors will copy it in a heartbeat. But that’s life, perhaps worthy of getting you to read the table-chat religiously because if you don’t, you might miss some cool news:

“ImpactPPA today announced it was selected as one of the top three most promising ICOs at this year’s North American Bitcoin Conference. 114 companies were in competition for the award and a share of the $100,000 prize money.  ImpactPPA’s model for tokenizing energy generation and distribution was selected by the competition’s sponsor, Victory Square Technologies.

ImpactPPA has designed a decentralized renewable energy platform that will allow users all over the world to access clean energy on a mobile device.  Primarily focused in the emerging economies of the world, ImpactPPA’s platform allows for a “pay as you go” model for power, allowing the most remote and underserved populations to access to energy and a chance to improve their quality of life.

The Company was supported at the conference by the Advisors to the Minister of Energy of Haiti, Mr. Alix Alexis and Mr. Ludner Pierre, where the systems are being deployed and piloted.”

Now the following story is somewhat interesting and really we should cover it fully but with so much going on we’ll probably forget, so we’ll park it here:

“After years outside the mainstream, crypto made a surge late in the year to become 40% of total financial services conversation. Bitcoin is the 4th most loved financial services business on social media behind American Express, PayPal, Vanguard according to the new 2018 Financial Services Report by social analytics company NetBase.

Really? Behind PayPal? Wow, bitcoin, get your act together bro. PayPal!

Alright, good, we finished. Although there is this news about bitFlyer, but you’ve probably heard about it by now. They received a Payment Institution license by the Luxembourg regulator Commission de Surveillance du Secteur Financier (CSSF).

And because EU has passporting rules, that means they are in effect regulated across the entire European Union. Making them the only crypto exchange to be regulated by Japan, America and Europe.

Quite an achievement, especially as Japan tries to take them crypto-billions off South Korea, but the latter has apparently gained their senses and is seemingly settling on taxing the crypto-industry as well as regulating it with hopefully some reasonable laws.

There we are, finito. Thank you greatly for reading table chat and until next time, may the gods bless our free lands.