A decentralized, peer to peer, eBay like, crypto store, has now launched Bitcoin Cash and Zcash functionalities, with users free to choose between the two and bitcoin.

You all remember OpenBazaar from some four years ago when everyone was eager to try it, only to find out it doesn’t work. Well, times change. The peer to peer market place now generally functions pretty finely.

After downloading a very small file of a surprising size considering its a node that makes it all run, at just 150MB, we were met with the following screen.

We chose Bitcoin Cash to see how the newly added currency operates. Next, we had to deal with a bit of legalese, which was clearly not written by a lawyer.

So it took us little time to read the few paragraphs, as we are sure you all do with Terms and Conditions. 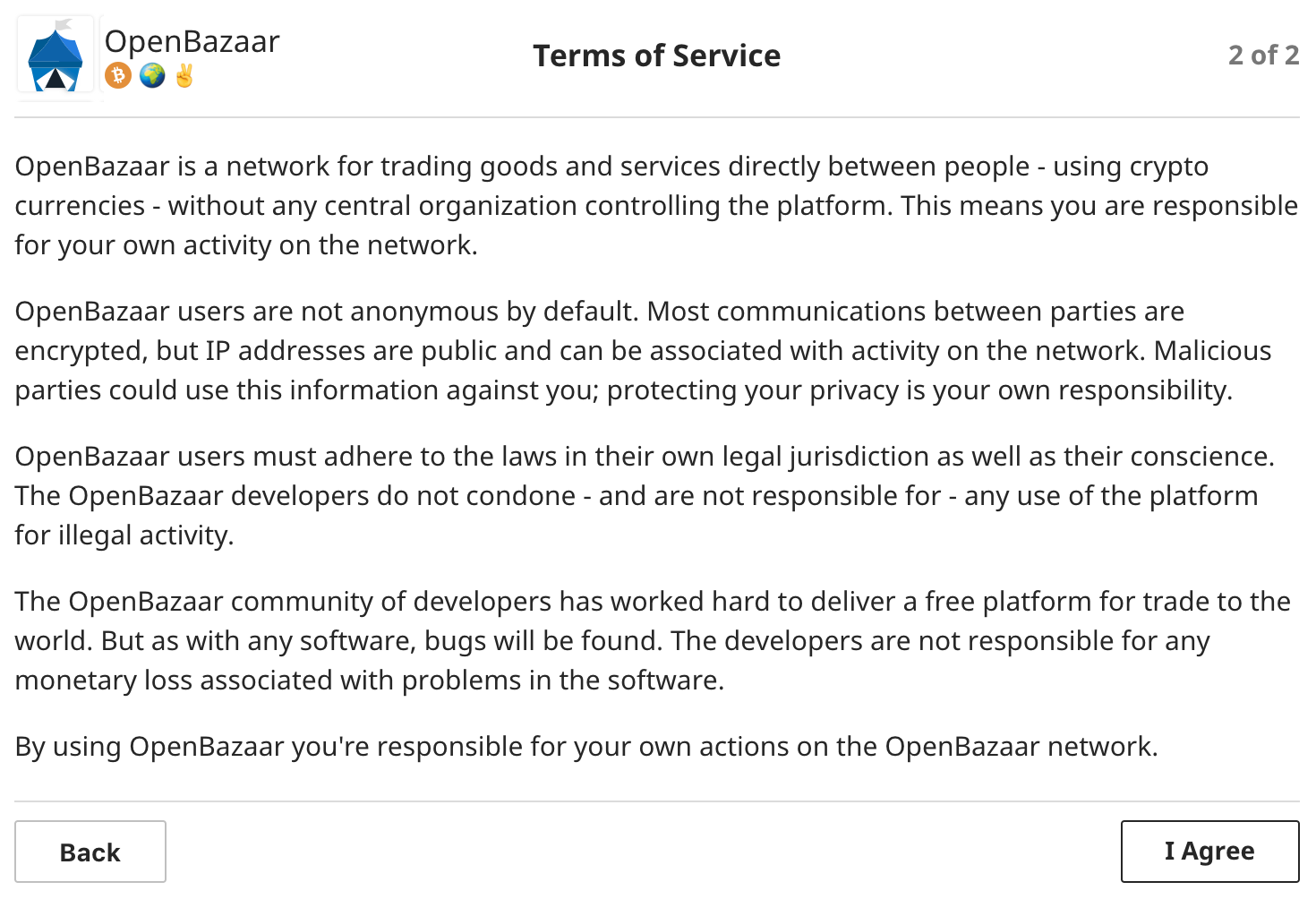 Our location and currency preferences were then asked. We left it as it was with our empty store loading to greet us.

So far, the service has been running very smooth, with pages loading instantly, including the store browsing section where goods for sale are listed. 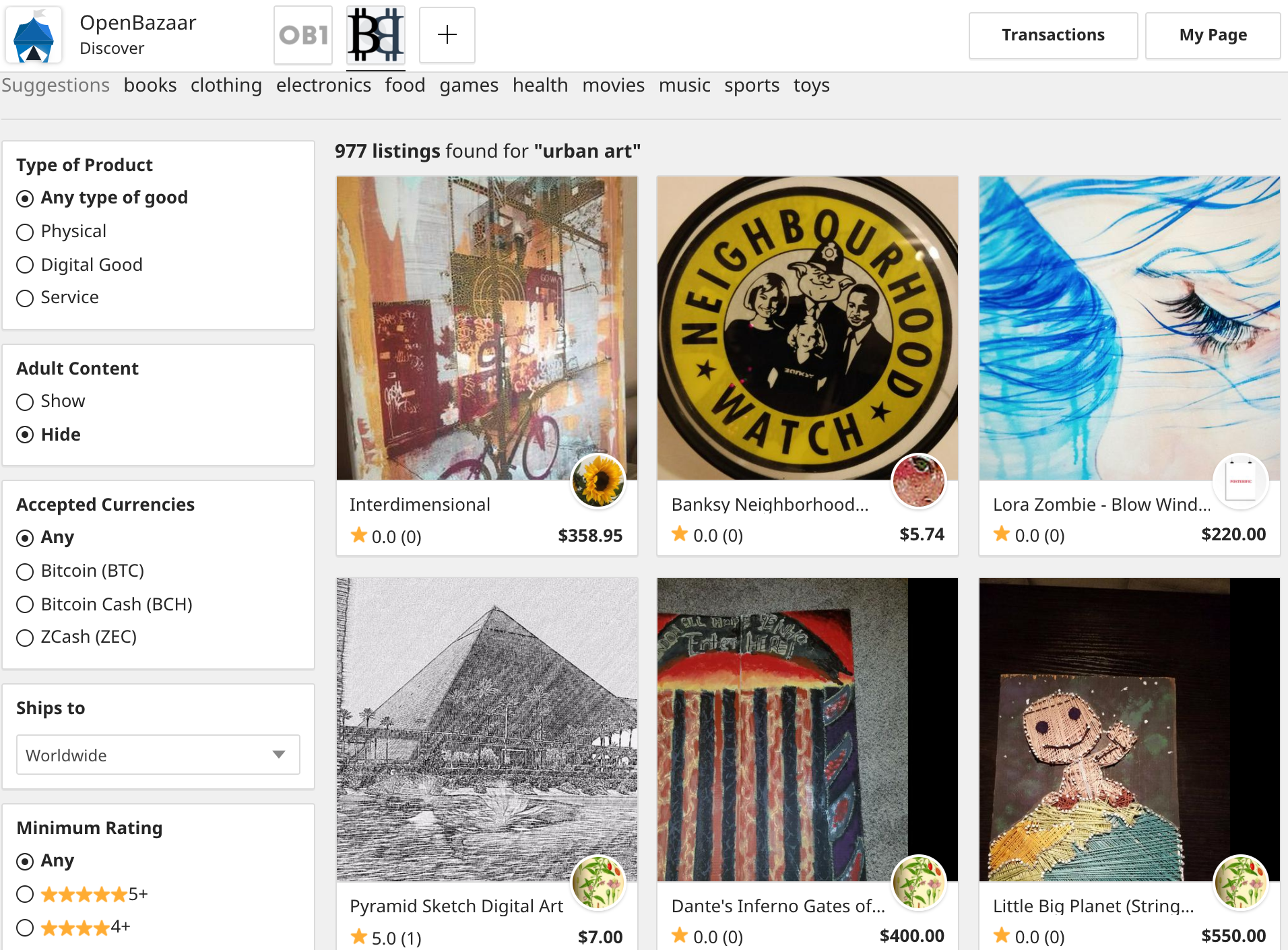 Clicking on listings might be a little bit of a more dicy experience. The first one we clicked took an uncomfortable amount of time at perhaps 20-30 seconds.

The second clicked listing then loaded almost instantly, but now and then you have to tap your fingers when browsing.

There aren’t that many listings for BCH we must say. Nothing that made us think: wow, I want that. The feel, also, isn’t too edgy. No cool t-shirt we could have been tempted to buy to one up Buterin. No little sticker or maybe cool small curious gadget we could have taken as perhaps a memory placeholder for the experience. No yellow tracksuits you might find in a cutting edge place.

But, that’s our subjective opinion with more than one hundred products listed for BCH. It all starts somewhere afterall, and this is where OpenBazaar starts.

So pretending we are a typical geek that spends his time playing games until 5AM, we claimed to be buying the following:

The seller is apparently moving house and doesn’t have much space for it, so he is trying to see whether he can perform one of the first BCH transactions on OpenBazaar.

We pretended to oblige by clicking pay, so met with the following fairly interesting page which only requires our address: 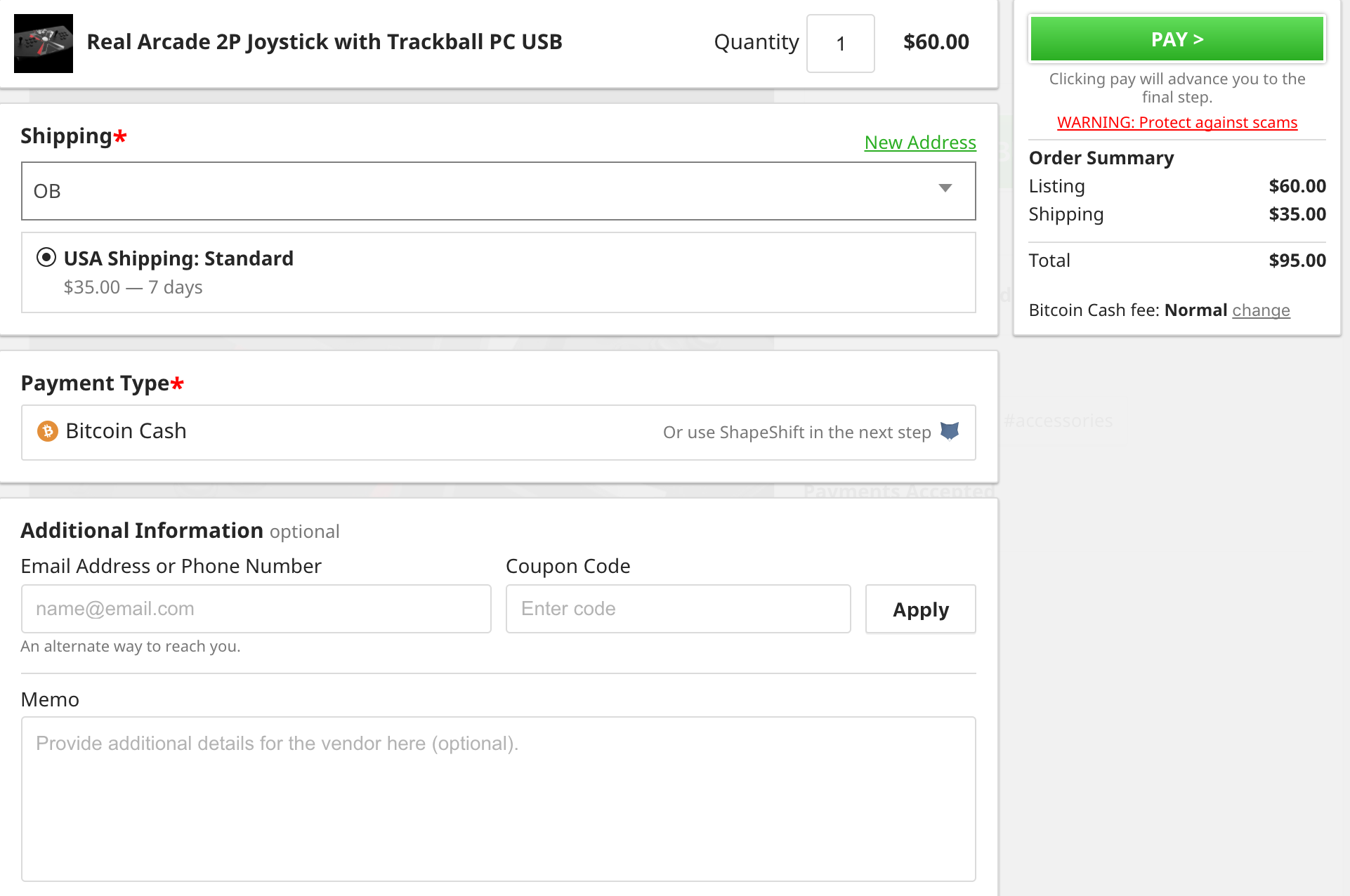 As this was our first time using the service we had to add an address. Curiously, it had no compulsory field, except for name, which we uncreatively entered as OB, and country, which we left as US.

Neither of those is true, nor did we have to enter an actual address. With everything amounting pretty much to being optional.

Except for the money, that part wasn’t optional. And since we didn’t really want the product, we had to leave it there:

We don’t know what would have happened to the browsing listing if we had paid for the product. We mention it because we saw quite a few pages which said the listing no longer exists or can’t be found. Thus we suspect that aspect isn’t very well streamlined with already bought listings still seemingly showing while browsing.

Nor would we feel very comfortable buying the above product with an irreversible currency, although the seller has been somewhat active on social media so in this specific case we lean slightly more towards trustworthiness.

Usually, of course, there are reviews and if the seller has many stars you feel fairly confident, but those reviews have to slowly build up.

Thus the chicken and egg problem, for it to be useful it needs many users, and for it to have many users it needs to be useful. To get users you need merchants with enticing products, and to get those merchants you certainly need users.

The project, therefore, has an altruistic element to it, and by altruistic we mean individuals who are willing to accept a bit of inconvenience in cutting new frontiers in order to support Bitcoin Cash.

Whether they exist, time will tell, but OpenBazaar has the potential to become a one stop shop for an individual to live solely on BCH, perhaps even conveniently.

As much of it is optional, and all of it is open source so anyone can recommend anything, there is no requirement for any listing to be an actual good.

A landlord, for example, can list their house for rent. A non-game addicted geek could provide the 10,000 BTC service of buying a pizza with fiat after the buyer paid with BCH, then delivering it.

In short, the platform could become a “who accepts bitcoin cash?” portal. Its search functionality seems very functional, although they could offer click categories, so there appears to be little reason why it wouldn’t also serve as a business listing.

That would make it a lot more useful than a simple second hand goods shop, because many people want to see what exactly they can do with their real bitcoins.

The market place, therefore, could become an economy. An island within a fiat world where Bitcoin Cash rules the land.