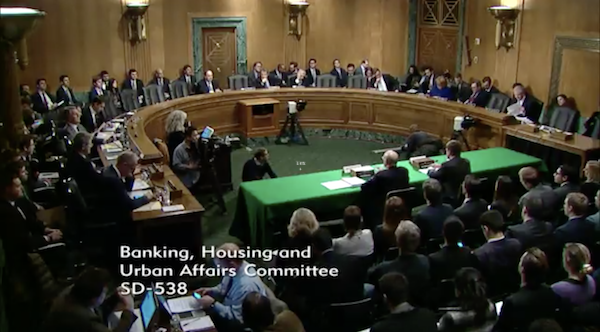 John Kennedy, US senator from Louisiana, said the disclosure and prospectus requirements by the Securities Act do not work.

Addressing Christopher Giancarlo, CFTC’s Chairman, he enquired whether he had read a stock’s prospectus before buying it. Giancarlo replied in the negative, further adding most investors do not read them.

I don’t think disclosure works, it’s good for lawyers, and financial advisers, but we over disclose, Kennedy said before further adding you can get your lawyers to write a great disclosure on bitcoin, then pick 15 names from the phone book, say read this, tell me if it makes any sense, and none of them will think it makes any sense. What’s the point? Kennedy asked.

Jay Clayton, SEC’s chairman, insisted he was unhappy with unregistered ICOs. We should separate cryptocurrencies from ICOs. ICOs are securities, he said.

“You can extend disclosure to bitcoin and you haven’t done anything.” Kennedy said, adding “disclosure needs to make sense and help people other than the lawyers.”

Putting aside the fraud fraud, what’s the point of all this over disclosure when no one reads it and why do we want to do the same with bitcoin? – Kennedy asked.

Mark Warner, US Senator from Virginia, said we are sitting on top of something transformational. He said he got early in the cell phone business, people were saying it was going to remain a small market, they were wrong, I got rich, we are looking at the same transformation taking place, Warner said.

Take Ethereum, Senator Warner said, there are file-sharings for extra computer time, not sure what kind of asset this is, he said. Further saying CFTC had allowed bitcoin futures but SEC had not allowed the bitcoin ETF, more co-ordination was needed, he said.

The people who wrote the securities act a century ago in 1933 were smart, Clayton said with an almost smirking smile. It is broad in definition, – he continued.  If you give someone money expecting returns on it based on their efforts, it’s a security, he said.

Clayton generally came across as winging it, not really on top of the matters he was discussing, answering often with general statements and usually saying I agree with Giancarlo.

My niece bought bitcoin, Giancarlo said, and she’s a hodler, which means hold for dear life, he said. She thinks there is something to this, I want to hold on to it – Giancarlo said.

Some senators said they were from a time when they used only pen and pencil, even a quill, but some senators seemed to be aware, with one of them asking about global regulatory arbitrage. He was met with no real answer from either Clayton or Giancarlo.

There are some who see the benefits of cryptos, “I’m not seeing those benefits” – Clayton said. Asked whether he had any tech expertise at the SEC, Clayton argued the tech is in effect irrelevant, they have economists look at it.

Giancarlo said they had individuals with deep background in these tech innovations at the CFTC, they had opened a Lab located close to innovation centers to learn from the innovators.

The hearing overall was measured, with a number of senators appearing to be very friendly to this space. Clayton came across as clueless, saying little more than ICOs are securities, without really explaining why or making much distinction between different token projects, while Giancarlo appeared to be on top of the subject.

More interestingly, however, it appears the majority of the senators at the hearing have some understanding, with a few of them seemingly having quite a deep understanding. And overall they appear to be supportive.