Giancarlo, the Man, the Legend, the Meme 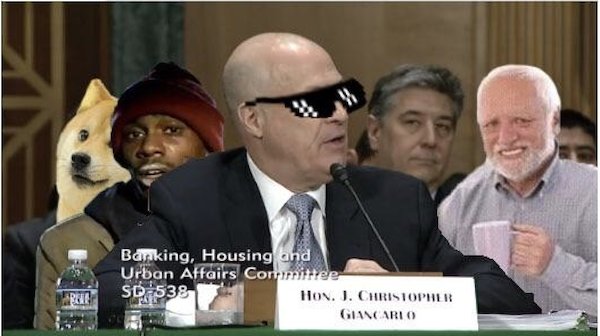 “Thank you chairman Crapo,” Giancarlo begun. “I hope my kids are listening,” Giancarlo ended. And with the few words said in between, the man became the legend and the meme.

Representing millions of Americans, the proud dad of three, now the adopted father of many, told our elected representatives:

“It strikes me that we owe it this new generation to respect their enthusiasm about virtual currencies.”

An attentive senate appeared to be hearing every word as Giancarlo tells the story of his three millennial aged children, who were not interested in stocks or investing, but then last year something changed, they took an interest in bitcoin.

He even mentioned the word hodl, saying his niece is a hodler, which means, he said, hold for dear life.

This is probably the first senate hearing many in this space have listened to in full, and in that imposing surrounding, Giancarlo seemed nervous at times while speaking, as if he was to do something brave.

He was, in a way. His leadership took courage for he was going against a seemingly established grain where politicians and regulators only focus on the negatives. He, instead, struck a reasonable balance. Go against the criminals, but respect the ordinary, hard working, honest people and their enthusiasm.

With his expression at closing probably saying it all, just how proud he seemingly felt he had stated it all.

Whether he has won the senate over, we will have to wait and see, but he has certainly won over this space, and if he ever decides to go for an elected office, the memes would probably ensure he wins.

For the man can hear and appears to have the pulse of the nation in this area. And when times demand leaders rise. Cometh the hour, cometh Giancarlo. But in a different universe this was happening instead:

It misses Senator Elizabeth Warren. She should be there saying enough about this crypto stuff can we talk about my retirement account. I know stuff about that one.

And jokes, of course, have some truth to it. A senator, for example, asked Clayton whether he thinks the stock market will keep crashing or if it was just a dip.

They most probably all have stocks. At least some of them might have crypto too. After all some 57 Ukrainian politicians have declared crypto holdings, why would Congress be any different.

The tune, therefore, might have begun to change. We all now hear everyone saying crypto is here to stay. And in that changing tune, Giancarlo might have played quite a role to set the direction.