Imagine waking up one day to find out the entire team of a project you co-founded has suddenly left to another business, taking 77,000 twitter followers with them, followers who suddenly are told  this is now mycrypto.

That’s what happened today, at the quietest time, when America was about to go to sleep and Europe was about to wake up. 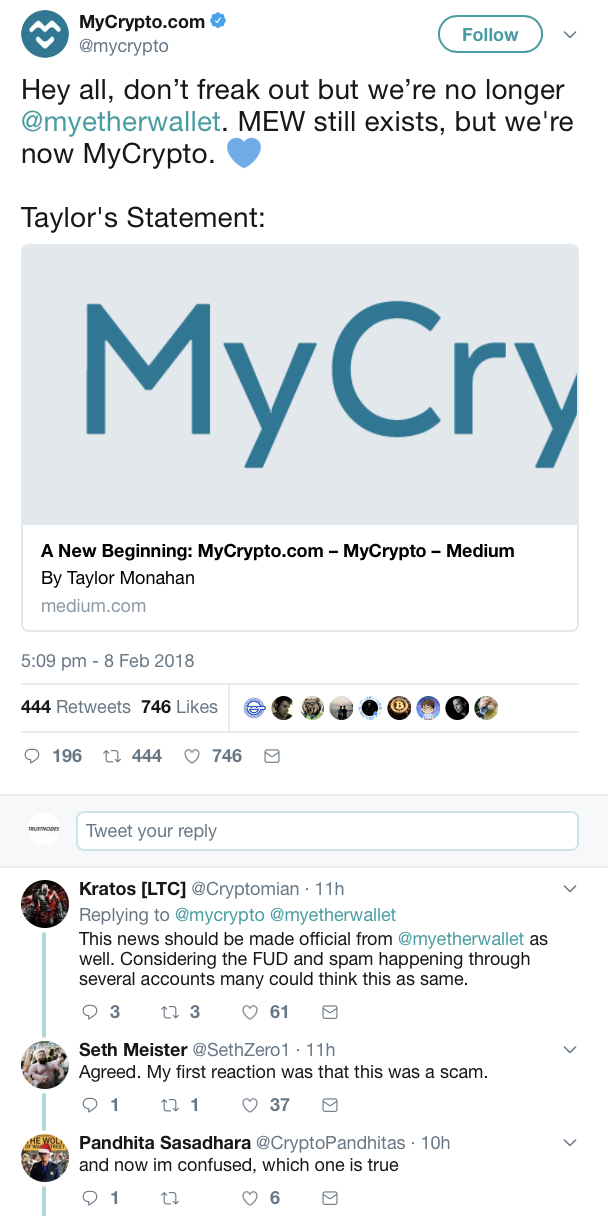 That’s not the case, fortunately, depending on your view in any event, but it does seem many have reported mycrypto as a phishing site, with twitter telling us this: 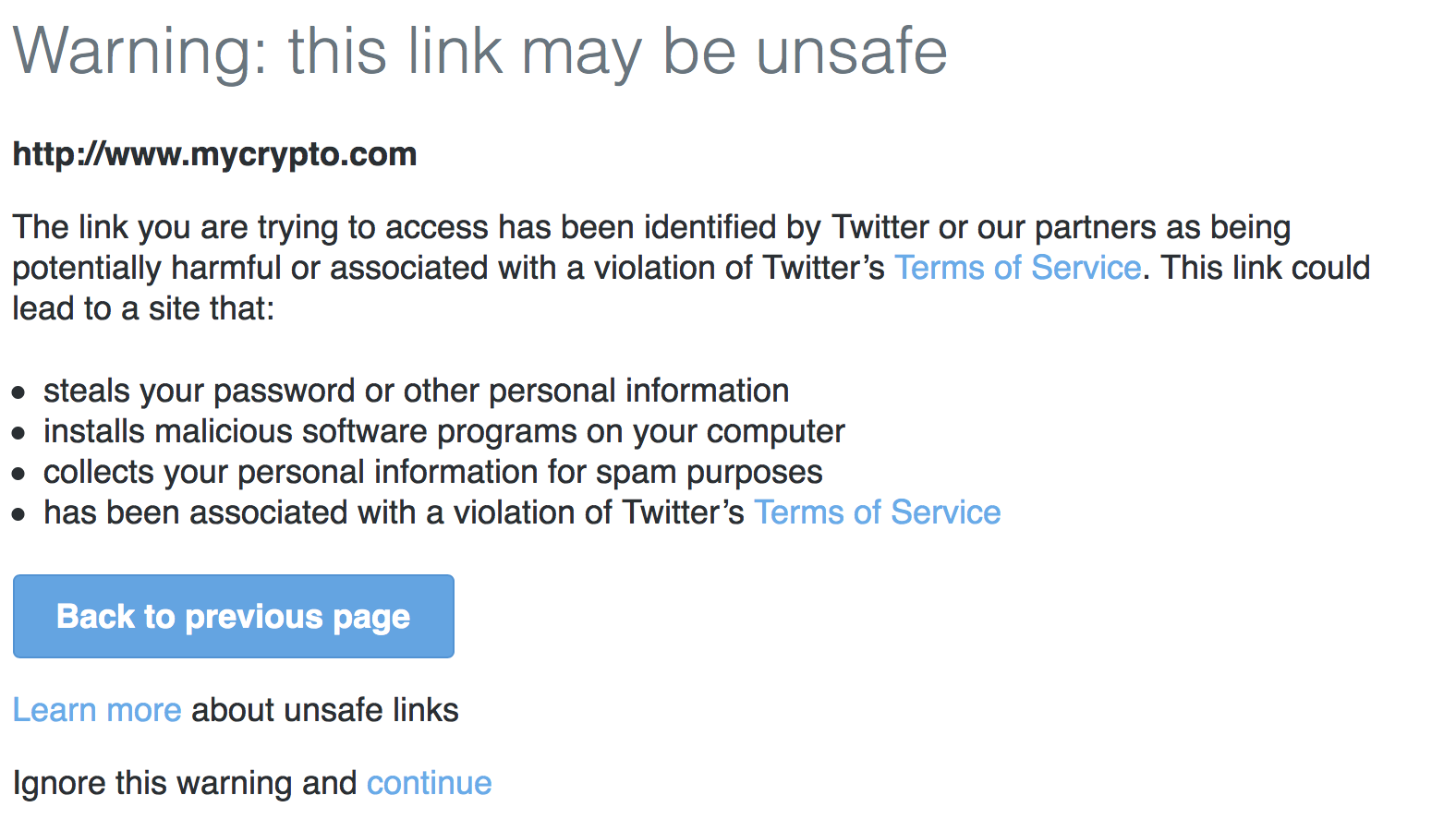 All expected, so why do it? We can’t say we know. The two co-founders, Taylor Monahan and Kvhnuke have seemingly split, but why remains unclear.

Kvnuke says he wasn’t aware of the situation, Taylor says she told him. Most ethereans seemed repelled at the twitter takeover and pretty much everyone, except for those involved, is currently in the dark.

In a rambling statement Taylor says due to the significant growth experienced in 2017, what was a project they worked in their spare time now needed to become a for-profit company.

We presume that’s where the difference lies. The two co-founders might have argued how much shares each should receive, Taylor perhaps arguing she should have most because she has contributed more. 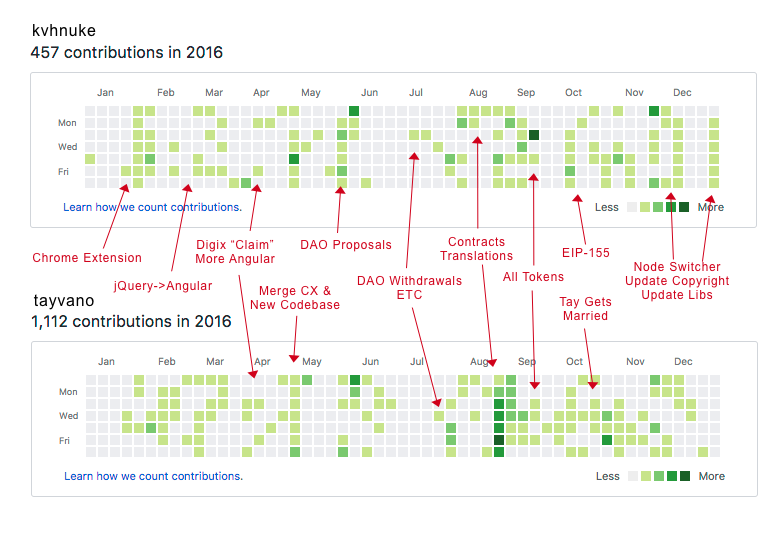 A typical situation we’ve all experienced at some point. If indeed that is what happened or if indeed Kvhnuke was aware of the plans to form a for-profit company at all, because we are speculating as neither is saying what went on at this point

What we do know is that Taylor took the rest of the team with her, with both co-founders stating MyEtherWallet was to continue. Taylor further says:

“Kvhnuke remains in control of the MEW github repository, the MEW domain, the AWS instances, and the MyEtherWallet social media accounts.”

That last statement is factually incorrect. Taylor took MEW’s twitter account with its 77,000 followers. Kvhnuke says he had not given her permission to do so. Taylor says she treated it as her personal account, but she does have an actual personal account and the one she took was a very branded MEW account.

Venture Capitalists enter the equation. BoostVC in particular. Taylor says she has been working with them since 2017. It’s unclear whether Kvhnuke was aware of it.

In response to the twitter takeover, in a now deleted tweet, Brayton Williams, co-founder of BoostVC, congratulated mycrypto and said something like they look forward to working with them, if our memory of what it said serves well.

As the crypto space now grows considerably, an overlooked element is the rights of parties in open source projects. In particular, regarding centralized aspects, such as twitter accounts, domains, and even reddit subs.

If there is a split, who should take them, how are they to be distributed, does any law apply at all, is it simply a question of whoever has possession and if it is, is that justified considering open source projects are more of a public commons?

Those questions don’t have easy answers, nor is it the first time they are raised. The bitcoin split, for example, continues a war of words over brand names and the rest.

And if we look at the MEW situation from a cold, logical perspective, is it right Kvhnuke should keep all the assets and Taylor starts from scratch despite contributing at least as much if not perhaps more?

Yet, is it right she takes one of the most important asset, the twitter handle, and suddenly announces a re-brand without prior warning?

The execution of the matter is unmistakably very mistaken, and does come across as Machiavellian maneuvering, but if we ignore that aspect and if there is a genuine split on how to move forward, just how the divorce should proceed isn’t a very easy question to answer.