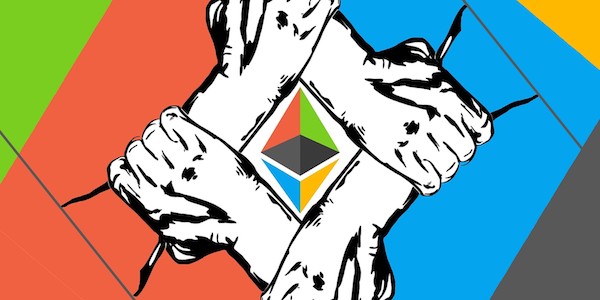 “The kind of paradigm shift I’m interested in with DAOs is that instead of teams raising money, you have ideas raising money. Then teams can compete for which team can spend the money to implement the idea most effectively. And if one team stops performing well, then it can be replaced.”

DAOs are a complex structure both legally and technologically whereby the company is in effect turned into code. Unlike in current ICOs or in the stock market with traditional companies where you just hand over the money, in DAOs you have full control of the funds.

The token holders in a DAO become in effect the company executives and its board of directors. For every penny of eth that is spent, they have to vote to approve or reject it.

The coding team or teams have to come up with proposals to persuade the token holding directors that they can efficiently execute the idea, with token holders then voting on the matter.

Unlike currently, token holders can decide to give them enough funds for say just one month, then re-evaluate based on progress. Thus keeping them accountable with the coders in effect acting like employees.

The Securities and Exchanges Commission has stated that DAOs are securities, but that interpretation is unlikely to hold in any court of law because the structure is more comparable to a group of friends joining their funds to start a company as the token-holders keep full control of the funds.

It can therefore be called a co-operative or a partnership, but it doesn’t really fit with anything known before because it is an innovation brought forth by smart contracts.

You can imagine a world where you wake up in the morning and while enjoying your coffee you log into a website that has a number of proposals with someone you pay, and many other tokenholders pay, having compiled summaries and perhaps even analysis or if there’s a vote required, recommendations.

Much of it might probably not even require anything from yourself, but sometimes you have to make decisions as to whether a team should continue be funded or whether a new project proposal is worthy and so on.

The paradigm shift here is that the worth of an individual is extended through a global network of individuals with those many $100s worth of eth becoming millions.

The ordinary individual thus becomes part of the capitalist profit making and value creation class, rather than solely part of the labor class from which most of the value is derived.

With he or she being completely in charge due to an innovation that was never previously possible. The funds are held by no one but a smart contract computer code that obeys solely the will of your vote.

In traditional companies, the funds are sent to a management class which creates many problems as shareholders are in effect powerless, with the management class paying itself $30 million a year or whatever obscene amounts.

In traditional co-operatives too, while they likewise bundle the funds, it is still controlled by a management class. With possession being 90% of ownership, profit distributions tend to have a bias.

In DAOs, there is no management class. For it to really work you’d need professionals of course who analyze matters, undertake due diligence, but they are directly paid by you, rather than paying themselves as they do in traditional companies.

The management class therefore are the token holders, who can be in the thousands or more, making it a radical innovation that appeals to both the equality left and meritocratic right.

It was a DAO that grabbed the world’s imagination in 2016 and gave ethereum the aura it now has. The Slockit DAO, the very first such attempt, plunged this space into water to sink or swim.

The expectation then was it would raise $10 million or $20 million to fund a Slockit ethereum hardware IoT computer project. It raised some $250 million worth at the time.

Everyone was forced to grapple with what all this is and how it is now meant to operate. There were discussions about legal liability, about whether people would bother to vote, about how to do due diligence and so on.

Unfortunately, as is often the case with pioneering inventions like the crashing first airplanes or the barely moving early cars, the Slockit DAO too crashed by being hacked.

That instantly closed all the debates and shattered many dreams. The idea itself was shelved as it was thought for a smart contract to hold all these funds was too dangerous.

Projects thus begun undertaking simple ICOs where you just hand over the money, with token holders retaining zero control and the projects having zero accountability.

But dreams never die, especially when they promise a radical transformation of the current class order. The DAO, the idea of it thus, continues, but its refined implementation is yet to be seen.