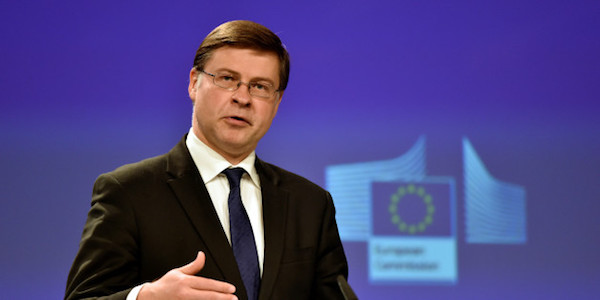 “One key action is our legislative proposal for an EU license for crowdfunding which we are presenting today.

It would allow both lending and investment-based crowdfunding platforms to operate across the EU based on a single authorisation, and without complying with 28 different sets of requirements. This would help them to scale up.

That way, they could offer more choice for investors, and more opportunities for entrepreneurs to attract funding across the EU.”

ICOs of under one million euros could arguably be classified as crowdfunding because there is little difference in function for some ICOs.

As such, their compliance with one set of rules in one country, say Estonia, would allow them to tap into the entire European market, the biggest in the world.

As opposed to the current situation where they would need to comply with the different rules of each country from Germany to Italy to France, making it difficult to operate cross-border.

“The Action plan also looks at how to make sure that financial supervisors keep up with technological developments.

We encourage EU countries to set up safe spaces, where companies can experiment with new technologies and business models. Early next year, we will report on best practices for regulatory sandboxes,” Dombrovskis said.

Following the exit of Fintech’s main entry into EU, Britain, the continent fears they would fall behind as they would lack the highly sophisticated regulatory structure provided by UK.

One approach would of course be to allow the passporting of British financial services, but they might be preparing for a no-deal exit, thus are seemingly setting up their own infrastructure.

“The Action Plan also aims to speed up the adoption of technologies with high potential for breakthroughs, such as blockchain.

We will set up an Expert-Group to look into possible regulatory obstacles to financial innovation. But we should also keep a close eye on risks, such as those associated with cryptocurrencies.

If necessary, the EU stands ready to act once these issues are discussed at the international level, namely in the G20,” Dombrovskis said.

Regarding the crypto-G20, their only demand seems to be AML/KYC requirements on exchanges, with the bloc now seemingly appearing to move towards embracing blockchain technology.

We’ll have to wait and see however what comes out of the two new governments in the content. Germany, which has a brief line on blockchain and crypto in their coalition deal, and a potentially very crypto friendly government in Italy once, or if, it forms.