What’s Gone Wrong With Crypto Miners? And Why Are Cryptos so Volatile? 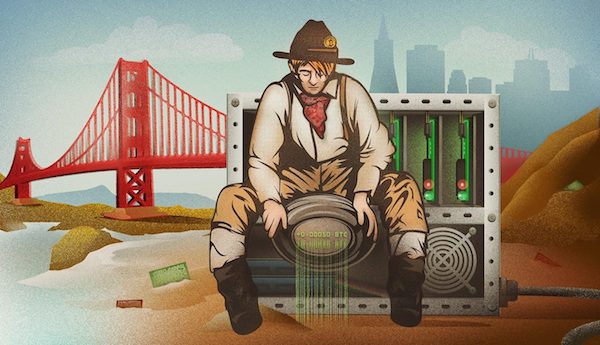 Exactly one year ago ethereum stood at around $50. That’s at a time when the ecosystem was far smaller, tokenization was not yet a thing, ICOs were not widespread, and ethereum processed only 100,000 transactions.

As more learned of the currency and platform, in the crypto space and outside it, price rose to a $420, but instead of holding that level, it suddenly crashed to $150.

The ecosystem, however, was growing by all measures, so price rose again to $400. Then quickly crashed once more to $200.

Demand outstripped supply considerably so a high of $1,400 was quickly reached within 4 weeks. Then, another somewhat slower crash followed, sending it down to the current price of around $400 in about four months.

What exactly is causing this stupendously high volatility? In the upwards direction, it is obviously more individuals wanting some eth, but then why do they just crash even when nothing has changed?

That’s a miner. BW specifically, a big Chinese miners conglomerate of sorts with a pool. They used to primarily mine bitcoin, but now they’re mining eth too.

They have made $400,000 in just four hours and that’s at these bottom prices. More astonishingly, they have only 0.7% of the global hashrate, at least according to etherscan’s current calculations, as you can see by the 0x52… address:

Some of that eth, if not perhaps all of it, will be sold. Hopefully they do so Over the Counter (OTC), but for just this miner someone or some people have to buy $400,000 worth of eth, otherwise price falls.

So to explain the volatility is somewhat easy. Sometime demand is so high it outstrips miners’ supply. But that usually only lasts briefly because if demand falls below it even for only a short period, miners bring the price down.

And they don’t just bring it down a bit, they do so relentlessly until it reaches the point of their costs production, at which stage some of them will go bankrupt.

At that stage, you’d think the hashrate would go down, but it never really does. We’ll use here bitcoin because it has a longer history, but the chart is pretty much identical for eth in direction and speed:

You can just about see that bear market in 2015. It looks like a straight line, but it is actually slowly rising. Then in 2017 and more so this year it just goes parabolic.

That’s just about ten people there, or institutional miners, and they keep on building bigger and bigger farms, turning more and more asics on, selling more and more bitcoins to pay for it all.

In ethereum the perception is that it is a bit more decentralized because it uses GPUs, but that’s not very true.

It isn’t you and me annoying gamers, it’s huge institutional miners with rows after rows of GPUs. That doesn’t mean there are no hobby miners or that a hobby miner can’t get some eth, but it’s not hobby miners were all this has seemingly gone wrong.

That’s because hobby miners don’t just sell their eth straight away to cover costs and to buy more hardware in an infinite loop, which is obviously unsustainable.

Hobby miners instead are converting electricity into crypto, then keep that crypto or use that crypto and yes eventually might sell. That is, hobby miners want the crypto itself.

Institutional miners on the other hand don’t care about the crypto at all. They are running a business, and to keep in that business they keep increasing their own expenses and those of each other. That’s where things have probably gone wrong as far as volatility is concerned.

Something which wasn’t really obvious before because cryptos have never previously fallen so far unless there was a blackswan. For bitcoin in particular, there was a good reason for its crash in 2011, in 2013 and then in 2014. But there is no real reason for such stupendous fall in 2018.

Perhaps a correction was due, but an 80% correction? Let’s look at facts, transaction numbers. And here they are clearest in eth:

The first time ethereum was at this price before the run-up in December-January, the network was processing only 100,000 transactions a day in May-June 2017.

When eth’s price rose again to $400 in August, transactions had risen to around 300,000. If we take that as a proxy for users or individuals invested in eth, they had tripled. Price however crashed from $400 to $200.

Price rises again to $400 in November. Transactions had now risen to more than 500,000. At this stage bitcoin enters the mainstream in awareness, so people flock, with price then rising quickly to fall slowly to now back to November for eth transactions and price.

The point is there has been stupendous growth and much of it continues to remain in the ecosystem, but as miners keep selling that growth needs to continue at a faster pace than their selling. If it slows down only a bit, miners instantly crash the price.

At that early stage, they might have not considered it a potential problem because perhaps they thought miners would use the crypto as a currency which is the whole point of it.

The mining idea, in fact, would have even seemed brilliant back then. So allowing individuals to easily get hold of some crypto, see for themselves how it works, then promote it, incentivize others to accept it for payments, and thus bootstrap an economy.

But institutional miners are not being a center of adoption in any way. They are certainly not using it as a currency because the Chinese government, where the vast majority of the farms are based, has effectively banned that usage.

Which raises the question of why 3 eth every 15 seconds? Why not 1, or even 0.1? How was this number decided?

For bitcoin they have a clear roadmap to 21 million. We don’t know why Nakamoto chose 21 million, but presumably he worked backwards from that number, incorporating the halving, making potential short term volatility a cost for bootstrapping an economy.

That’s obviously not gone quite as planned, but that’s how these things work with practice and reality so giving feedback for improvement.

But for ethereum there is no such clear roadmap where mining and supply is concerned. Obviously they’re moving to PoS, but that was meant to go live last year according to early plans.

That’s been delayed, that’s fine, but on what basis does an institutional miner that does not even use eth get half a million dollars in five hours?

Sure, security is important, but is there some maths somewhere showing 3eth is what provides the needed security, rather than 1 eth or 0.1 eth?

There is a point to be made that smaller miners would be hit too, but miners perhaps need to learn to not crash the price, to use eth as much as possible rather than using it as a conduit for fiat, and to stop building such huge farms for the sole purpose of building even bigger farms.

A certain level of security is required, of course, and we’re in no way placed to say just what that level should be, but we can’t see why they should be paid a penny more than whatever that level is.

Because whatever small miner there is would probably be a drop in the ocean compared to the huge farms. So such eth rewards are not quite rewarding a bootstrapping, but a price crashing, because they don’t use eth.

And if that’s indeed the case, then mining has become a problem which needs a solution. Because if they are the main cause of such huge volatility and they are doing nothing to address it by using the currency as a currency, then they might actually be harming the ecosystem by burning half a trillion in 12 weeks.