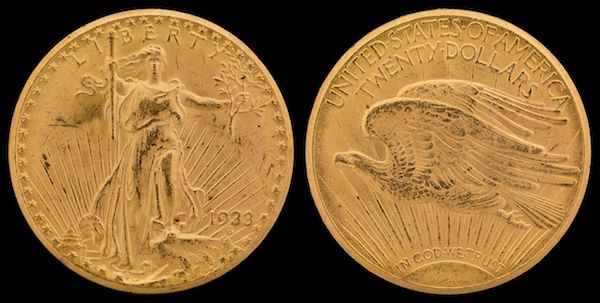 “To provide relief in the existing national emergency in banking… all persons are hereby required to deliver on or before May 1, 1933, to a Federal reserve bank or a branch or an agency thereof or to any member bank of the Federal Reserve System:

All gold coin, gold bullion and gold certificates now owned by them or coming into their ownership on or before April 28, 1933.”

So ordered Franklin D. Roosevelt, the then President of the United States of America, following a banking collapse during the panic of 1930.

This catastrophe, which later became known as the Great Depression, which in turn is blamed for causing the calamity of world war two, was caused by:

In reality, however, the cash resided in only one bank. Bankers at the time referred to the reserves composed of float as fictitious reserves. The quantity of fictitious reserves rose throughout the 1920s and peaked just before the financial crisis in 1930.”

The stock market crash of 1929 led to uncertainty regarding the solvency of banks, which in turn led to panics and bank runs. However, as much of the money was fictitious or fake, banks went under, and took with it global economies.

This led to an extraordinary executive order by the then president of America who on April 5th 1933 ordered the confiscation of the people’s gold.

Failure to comply was punishable with prison. Numerous prosecutions were undertaken for failure to hand over the gold to the Federal Reserve.

It is this day Satoshi Nakamoto, bitcoin’s inventor, chooses as his birthday. Some say he does so to highlight the difficulty of seizing cryptos, but we think he is symbolizing far more.

Nakamoto is highlighting the fragility of the banking system, how it can cause systemic collapses, and how it can lead to drastic, cataclysmic, consequences.

No president would have lightly ordered such confiscation, and no people would have complied willingly if they did not think it necessary.

And it was necessary because banks had effectively printed too much fake money. Real money was now needed to inject back into the banking system so that the means of exchange can continue operating.

That history repeats again in 2008 when some nation’s bank depositors had funds confiscated, while taxpayers in most countries paid up trillions to keep the banks, and by extension the money system, running.

Not an alternative to governments, or even a preventer of property seizures, for bitcoin does not run roads, hospitals, schools, fire-stations.

What it does run is money. Real money. Money which can’t be faked, can’t be counterfeited whether legally or illegally, and most crucially, money which does not depend on banks to operate.

That being the computer nodes, but unlike banks they hold not your money, they merely verify their movements and give the green light or red if its a fake transaction.

If a node goes down, or even most of them, the system keeps on running as if nothing happened as long as at least one node remains standing. While if banks go down, nations collapse.

Nakamoto chooses 1975 as the year of his birth to complete the above story. That is, it took 42 years after the banking collapse for people to once more have their freedom to hold gold:

There are many ways to interpret his choice of year. We notice it is not 15 August 1971, when “the United States unilaterally terminated convertibility of the US dollar to gold, effectively bringing the Bretton Woods system to an end and rendering the dollar a fiat currency.”

The highlight of the auction, therefore, might to some say it is pointing out government profiting from property seizure, but we think that’s too simplistic.

For gold had now become irrelevant to the means of exchange, thus had no systemic significance to the movement of money.

A movement of money that in the fiat system is tied to banks, so making banks in effect a national security matter, for if they go under nations go under as there would, in effect, no longer be a modern payment system.

That’s more clearly shown in 2008 when banks stopped lending to each other. As fiat money is created through lending, their failure to do so meant money was vanishing and ATMs might stop running.

Yet now there is no need for money to be tied to the success or failure stories of for-profit companies such as banks, a failure and success that is an intrinsic part of capitalism.

Because crypto money can continue moving through their independent, decentralized, online payment system, in a way that remains unaffected by any systemic factor, such as a bank or an exchange going under.

Thus if an economy was running on this system, a stock market crash would not lead to a banking collapse, and even if it did, it would not affect the movement of money and thus it would not decisively affect the entire economy.