Looking at the Bitcoin history chart, one can see the price entered the upper projection channel after breaking out the descending trend. Thus, the price reached the target resistance.

Moving forward, the current resistance breakout will allow the price to head to the next projection channel. The new micro uptrend target will be at $9,190, after which a new downmove towards $5,300 may occur.

This is well confirmed by the major ascending channel resistance breakout. Still, the price may break out the support at $7,900 as well, which will then trigger a downmove to the previous channel support, and then to $4,000.

The latest rising tide allowed Ether to break out the previous channel resistance, which may signal trend reversal.

The immediate target of this uptrend is however $600, after which a correction to $555 and, finally new rise to $750, may follow.

Conversely, if the support at $470 gets broker out, Ether may plunge to around $400.

As many other altcoins, Litecoin broke out the previous downside channel resistance and is moving to the projection channel.

Currently, a short term upside channel is being formed, with the target at the resistance, or at $156. The sideways channel resistance now being tested is acting as a local and intermediate obstacle.

After the target resistance has been tested, a bounce-off may occur, with the price coming back to the support at $114.45. This, in its turn may allow the price to move to the lower projection channel, down to $87.75. 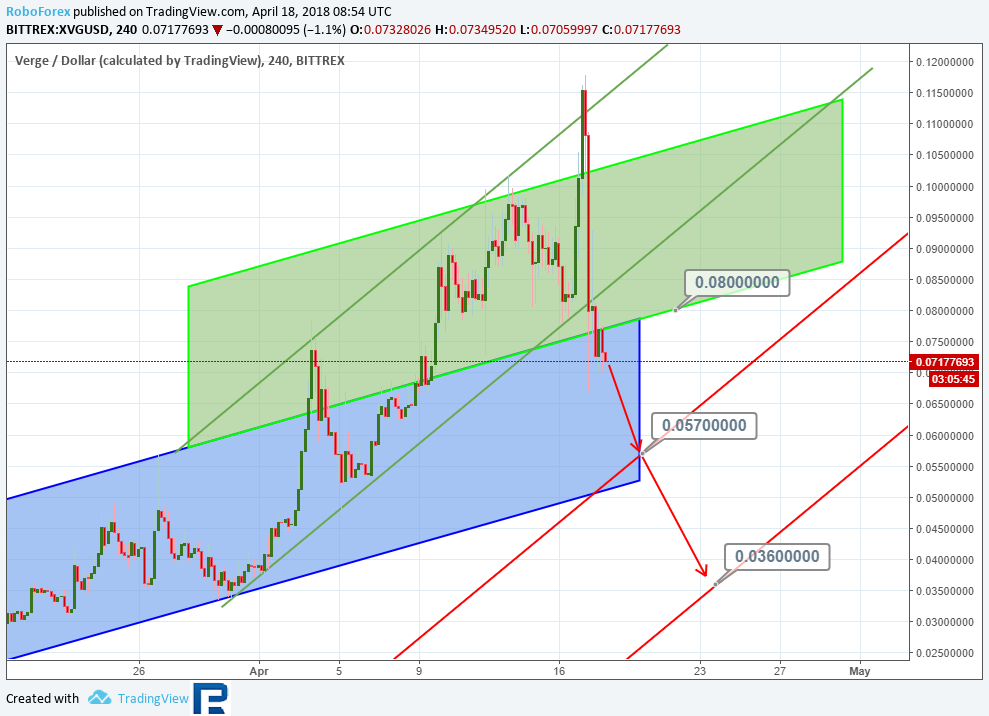 Technically, Verge uptrend has achieved some intermediate targets and is fading out. The price is now breaking out the trend support with a new strong move.

If the price remains in the lower projection channel, it may then reach the local support at 0.057. Afterwards, the price may both bounce-off and continue falling.

If it bounces back, its target may be located at 0.080, which is an important support level that may turn into resistance. Conversely, the price may get into the next lower projection channel and reach 0.036.

Currently, EOS has broken out the resistance of the previous channel, which shows that the downtrend is already over. The new trend leads the price to the projection channel resistance at 10.00.

The most likely scenario here is a bounce-back and a new downmove. The first support impeding this downmove from occuring may be the support at 7.50. If the price still manages to break it out, it may reach the next projection channel support at 5.00.