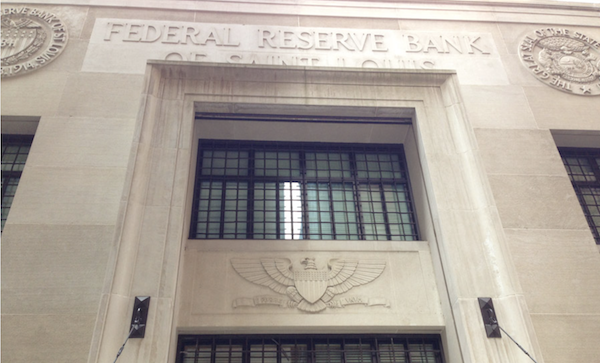 Fed researchers have shockingly strongly argued in favor of central bank electronic money for everyone in the Federal Reserve Bank of St. Louis Review.

And the main reason for it appears to be because they say the role of interest in the current financial system has “a high risk that it will trigger political controversies.”

Aleksander Berentsen, a research fellow at the Federal Reserve Bank of St. Louis and Fabian Schär, managing director of the Center for Innovative Finance at the Faculty of Business and Economics, University of Basel, have seemingly broken rank with what appears to be a consensus among central banks regarding what we call digital cash. That is, everyone has access to central bank accounts.

They do so in the context of a binding referendum in Switzerland this June 10th where the matter is put to a vote, with the article citing Switzerland a number of times. The Swiss National Bank is against the proposal, as is the German Central Bank, but the FED has seemingly implicitly or tacitly come out in favor of it.

To briefly provider an overview of money, we can say that the current financial system has three components. There is first the cash in your pocket, which is as simple as it gets. Then there is what we call digital cash, or the researchers call central bank issued money, which are not accessible by the public and are available to only other commercial banks. Both of these are legal tender and are “legitimate” money.

For the central bank, the system is somewhat the same in regards to how they create actual money, senbi/digital cash as we call them, or central bank digital money.

They act as a gold standard of sorts in the financial system, as a base. Around 200, mainly commercial banks, have an account with the central bank. That account can be seen as a sort of spreadsheet where the central bank freely types whatever number to be digitally shown. There isn’t some “concrete” representation if you like.

There’s a lot of interest here at play, and obviously we’re talking of billions and billions. So the current interest rate is fairly low at around 1.5% (averages 5%-6%), but even there that’s around 60 billion a year in interest on four trillion legal tender base money.

“All instruments that are currently discussed have the characteristic that the central bank pays, in some form, interest on reserves (see Berentsen, Kraenzlin, and Müller, 2018).

There is a political economy issue with these payments since, as of today, they are paid only to the few financial intermediaries that have access to central bank electronic money.

The general public might not consider such large payments equitable or beneficial, and there is a high risk that it will trigger political controversies that have the potential to affect central bank independence (see Berentsen and Waller, 2014).

Indeed, one of the main argument of the Swiss referendum proponents is that actual legal tender digital cash would mean everyone would benefit from the creation of money pretty much out of thin air, rather than it being concentrated as it is currently.

The authors further say “we conjecture that ‘central bank electronic money for all’ would have a disciplining effect on commercial banks.” That is because they’d have to pay more in interest to attract depositors as everyone would be able to hold it with the central bank in a way that is as safe as cash.

We disagree. We think they are missing a trick or there should at least be pilots. The authors do seem somewhat knowledgable of this space, calling cryptos “unique” and a “fundamental innovation,” but they don’t really consider how a centralized crypto could work, or their many other qualities beyond pseudo-anonymity and permissionless access.

And that is cryptos, ethereum in particular, allow inanimate objects to have a “bank account.” Try giving a fridge a fiat bank account, for example. That’s impossible, because the fridge would need to enter a pin or have some other authorization process, which of course it can’t do because fridges can’t think.

But, with ethereum smart contracts, you can put a small computer chip in the fridge, furnish it with sensors, give it wi-fi access to connect to the blockchain and the if/then smart contract rules, and basically the fridge now has a bank account and can metaphorically go out to buy milk for you.

It is not clear whether that is really possible only with a decentralized network. For simple crypto money itself, like bitcoin, you could of course have just one node and then everyone else connects to it through light clients or SPV wallets that run on your mobile as most already do for btc and eth.

But for smart contracts, you probably could do the same but it is not clear how easy it is to allow everyone to publish their smart contract in that one node, with all then connecting through SPV.

There could be plenty of innovation there, and really to have the author’s position is pretty fine as decentralized cryptos can provide the service in regards to sort of giving machines bank accounts.

But that decision should be a bit more informed, and broader than the author’s description, so as to consider the potential benefits more thoroughly.

That includes costs to run the different payment systems, the potential increased efficiency, and more widely the general potential benefits of money as code, or codable money.