Korean Peace Dividend in Sight, How Might Cryptos React? 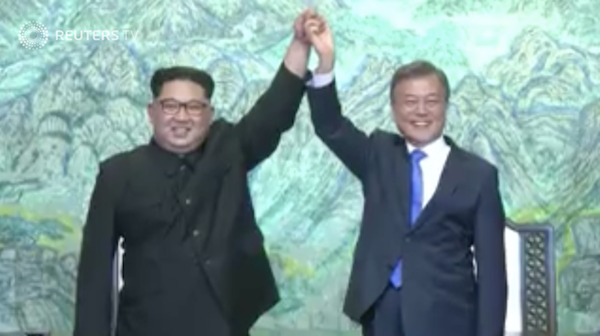 “The two leaders declare before our people of 80 million and the entire world there will be no more war on the Korean peninsula and a new age of peace has begun,” reuters reports.

Technically at war for more than half a century, the two Koreas might finally once more enjoy peace after what can only be described as an historic day, and a defining moment for this generation.

“I came here to put an end to the history of confrontation,” Mr. Kim reportedly declared after he told President Moon that “the North Koreans who visited the South during the Winter Olympics in February all admired the bullet train there.”

It has a late 80s, early 90s feel. Just as then the Berlin wall ended, so here too we might see the dismantling of one of the last divisive wall on earth.

With it, Trump’s stature will rise. The blond lion, lifted by the people (of 4chan), kept strong by their support even during the toughest times, might now in his old age of 72 give his children and the people of the world the greatest gift of that highest presidency: peace.

We have obliterated ISIS, he said during a conference with Macron. The Korean war is to end, he now says.

Is this generation really about to see a peace dividend of the 90s kind? Are we really to have a globe where great powers put aside their differences and co-operate, like the European powers managed?

Can we really believe we will see in our time peace from Arabia, China, Russia, Europe and Americas?

There are reasons to think so. A new blockchain internet with booming innovation and optimism, a blond president with love for life and pleasure, a half century old wall potentially coming down.

History rhymes, and if indeed it does here, a boom the kind we’ve never seen should perhaps be expected. Across economies, across sectors, across the globe, as people once more become happy, confident and free, with the veil of terror lifted, and with it too fear.

Like all sectors, cryptos should benefit. Risk taking so replacing children staring at 24 hours news screen. Aim and ambition replacing anger and simmering. Dreams of Mars and other planets replacing killer rockets and scary things.

After two decades of war, global peace might be here. We, the millennials, won, we hope. Now let us dream, let us dream the dreams.