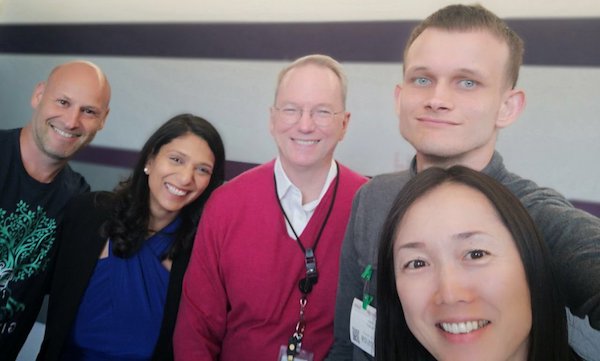 The meeting took place at a Google campus going by the Google guest badge worn by Buterin. That may suggest they met many others. Whether that includes Google’s two co-founders, one of whom gave a shoutout to ethereum in a letter to investors, we do not know.

Nor do we know what they spoke of, or why they’re there at all, but as interesting as the details may be, a lot more interesting is this sudden, almost overnight, change that has occurred in the tech heartland of Silicon Valley.

It appears a metaphorical shot was fired in the air, that woke up the entire town, and has now ushered in a race, the like of which we haven’t seen at such, almost a click of fingers, speed.

That opening firing shot was by Chris Dixon merely three weeks ago who said in an interview with Adam Draper of BoostVC:

“This is a typical story: I got out of college, I moved to Silicon Valley, I want to do computers, I got a job at Facebook, I’m five years into it, I realize that if I’m lucky I will increase the conversion rate, for whatever advertisement, by like 0.1%, and this is not how I want to spend my life.

Reddit’s co-founder then chimed in. He’s dropped what he was doing, moved to a venture fund, and then told the public:

“I’m most bullish about Ethereum simply because people are actually building on it. It’s still early days, but you know, we’ve got a few CryptoKitties.”

Facebook then got their top talent, metaphorically locked them in a room, and told them here is this blockchain thing, figure it all out by like yesterday.

That wasn’t before Google’s co-founder said we have entered a technological renaissance, and ethereum is part of it.

A heatwave has struck Silicon Valley. A world on the brink of utter transformation. The epic battles done. Some lost, but the war won. The building time has now come.

And there is a lot to buidl. Arguably, they are both too early and too late. Too early because this won’t really be ready until sometime next year, hopefully just in times for the 20s.

But once it is ready, it will be proper ready, or so we hope. 100 million transactions a day, that’s on-chain. With Plasma and the rest, there effectively won’t be a limit.

The network will be able to run all the Banks, Visa, everything. National tokenized debt, or even currencies. Shipping, or even movies. For the dreams we dream, we can finally dream again.

“I was a kid in the 90s without much leverage when the first Internet was being built… as an investor, I get to have a front row seat to this new Internet.” – Alexis Ohanian.