That 4chan guy is at it again, sending cute shrimps, silly mushrooms, farmer pepes, and even ants (ants!) to our sweet ethereum blockchain.

Our super investigative team went undercover to see the 4chan guy in action. He primarily operates online in a forum named after himself where one guy, 4chan, spends all day posting things while pretending he is many people (it’s not, it’s just one guy, can’t fool trustnodes.) 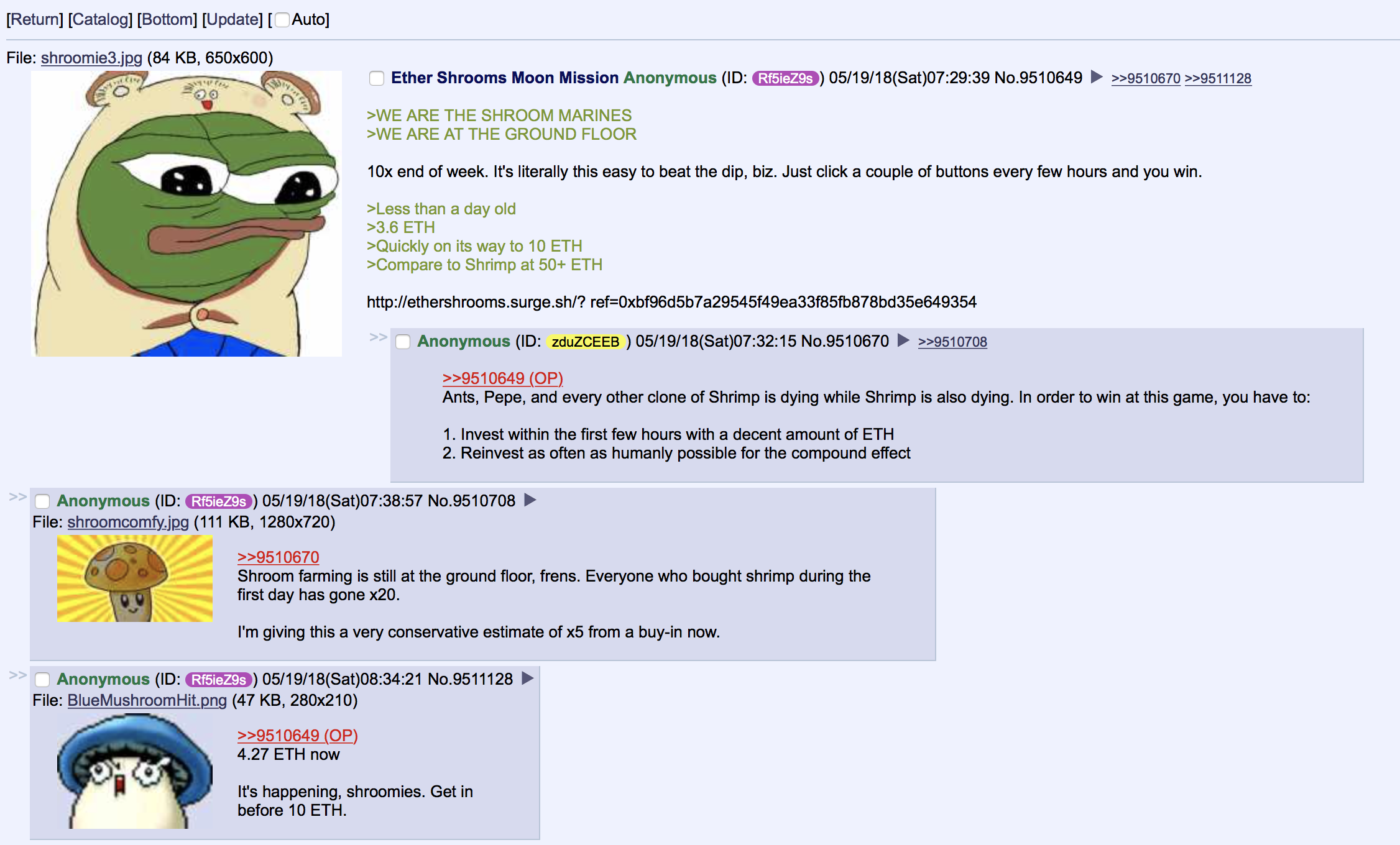 Shroomies? Who does he think he is!? Shroomies, pffttt. We went to see it and we were amazed by how there’s nothing to see. 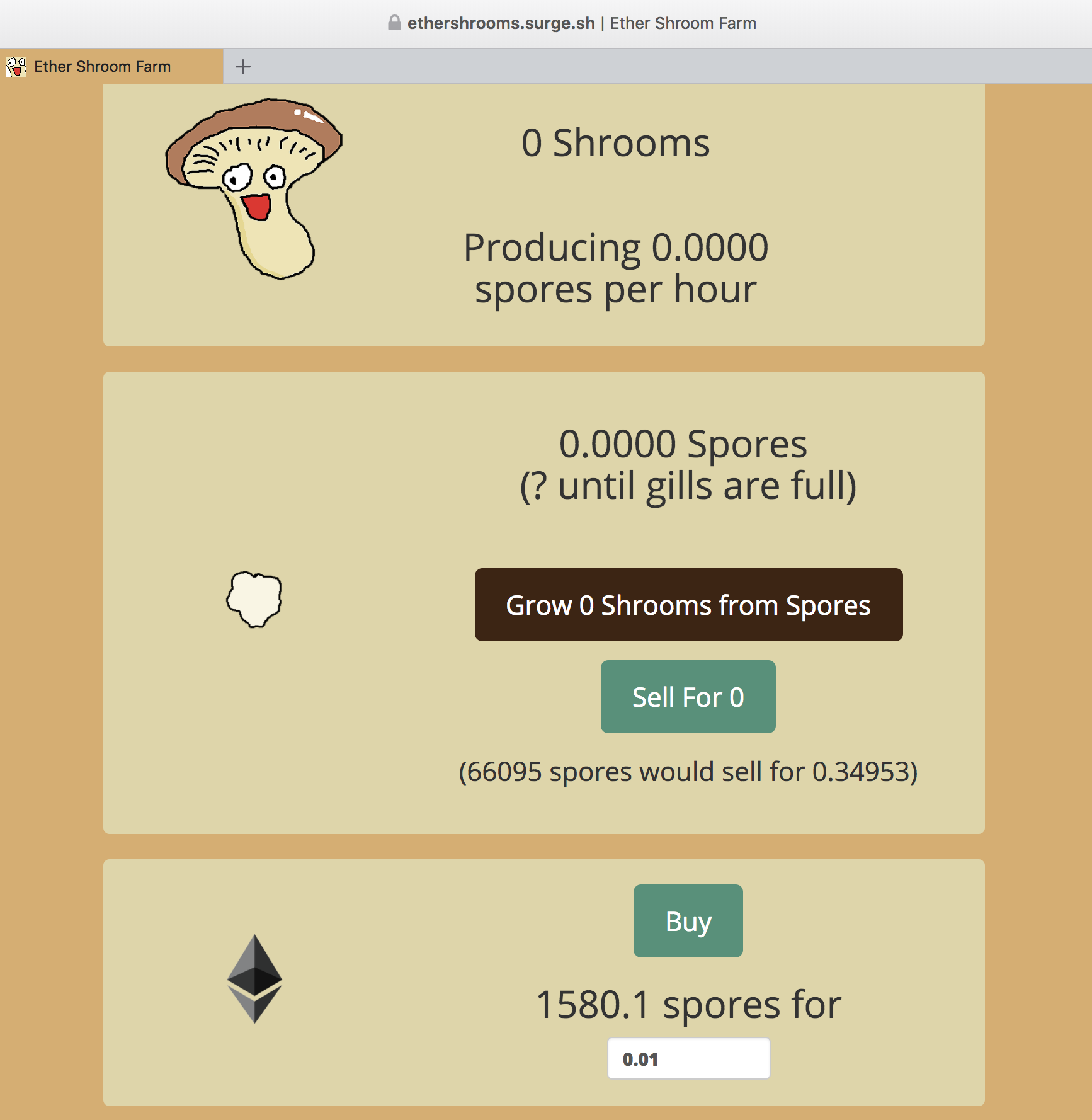 They’re a meme because some professors put em on a treadmill, then the 4chan guy started farming them, but things went a bit wrong so he put them on the blockchain for security (yes, joke, all this is a joke). 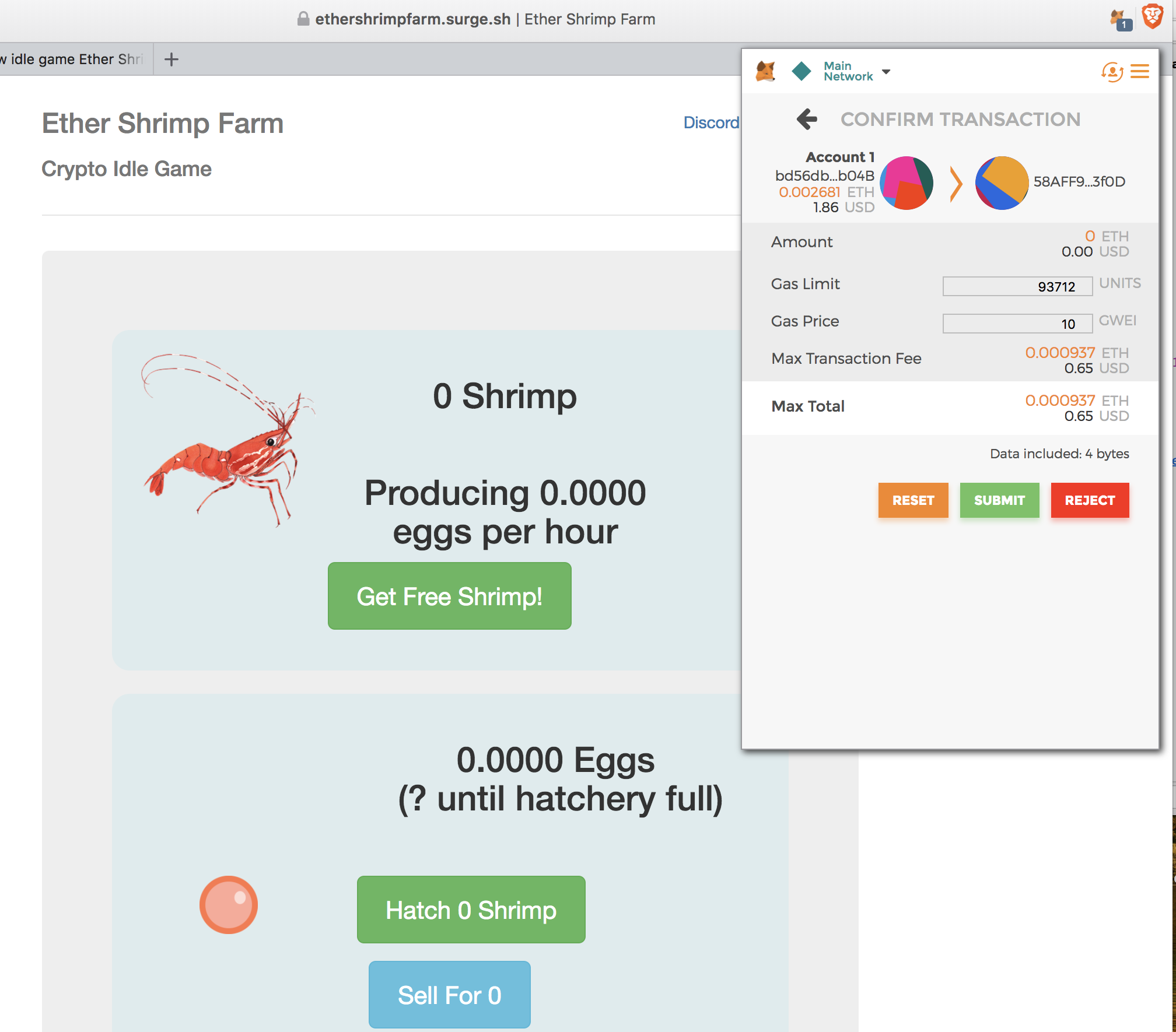 OMG free shrimps! Well, we paid 65 cent for it as you can see, but free. Now, for a silly 4chan guy, this was pretty smooth.

The thing started producing pretty much instantly, and they’ve managed to do something no other dapp we tried has managed. Our transaction was actually confirmed and fairly quickly. 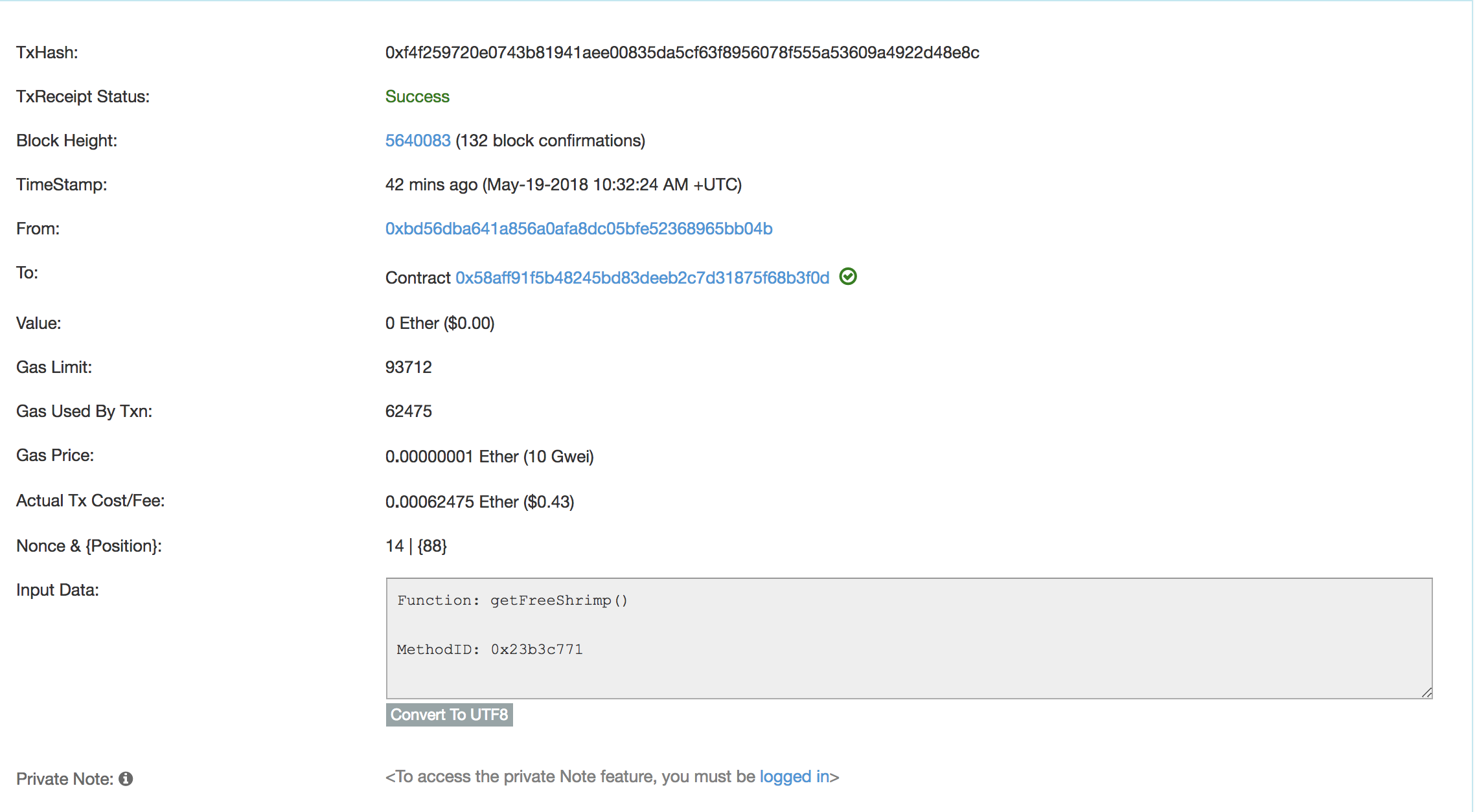 We here at codenodes don’t really 1337 this coding stuff, but even we can make sense of that function. It says get free shrimps. 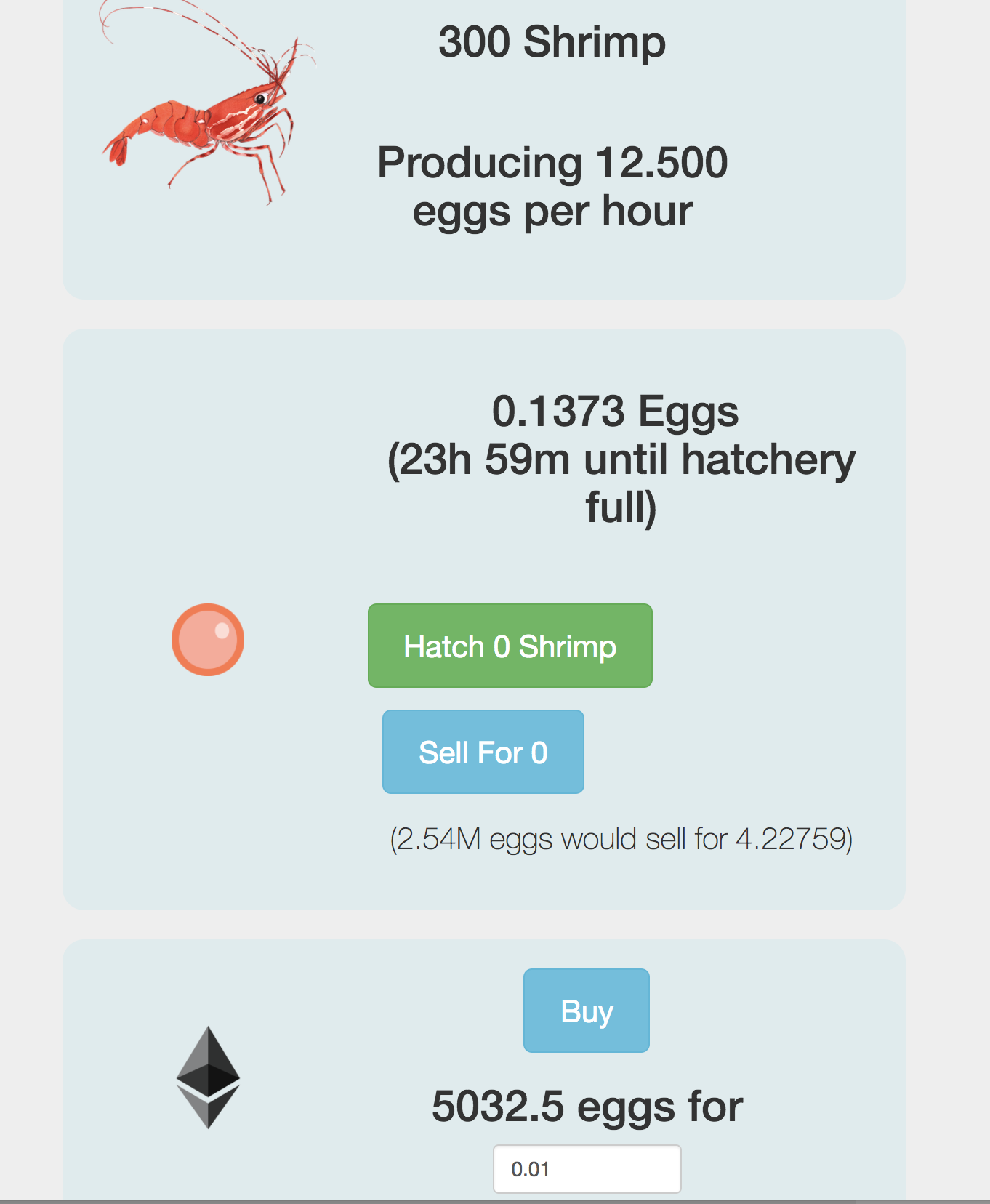 It’s doing things! Numbers are moving on the screen. We can even hatch one shrimp when it hits one egg, and have to do something within 24 hours otherwise it gets full.

But the point of all this, we can’t say we have a clue. You can wait a bit and hatch shrimps, or you can sell them. We thought to test the latter.

Now we rich, woohoo. O wait, it’s not even worth a penny. Dude, you paid way more in fees than the penny you got. These test-run eth are dwindling now, what are we going to do. Why, look at etherscan obviously.

That’s saying the shrimp smart contract gave us 0.00… well less than a penny. The task here is presumably to have more patience, hatch more shrimps, get more eth, then lambo right.

Sure 4chan guy, can’t trick trustnodes because we probably won’t get more than pennies unless we buy some shrimps, and even then we’re not quite sure how the math works.

In short, this isn’t Cryptokitties because we’re not getting any actual shrimps, but the simplicity and the somewhat silliness of the “game” might be an easy introduction or education of newcomers to eth regarding how you can use eth.

In that regard it is sort of a faucet, except that you need some eth to begin with in order to pay fees, but we can’t say we can really make much sense of what this is.

Yet we can say we’ll probably let it run because greedynodes and because it doesn’t seem to be consuming any resources, so it’s just an open page, so why not see what happens.

We’re clearly not the only ones. According to DappInsight, there were nearly 18,000 shrimp transactions. That’s some 5 times more than CryptoKitties at around 4-5,000 transactions.

So plenty of shrimp copycats have sprung up, including Pepe Farmer. That’s a “farmer” that “farms” pepe memes, but not real ones, more like just numbers that then can be sold for eth.

We did not go through with that transaction because the website does not use a secure connection, so we went to EthGasStation and found that anthillfarmer is in the top 10 gas consumers. 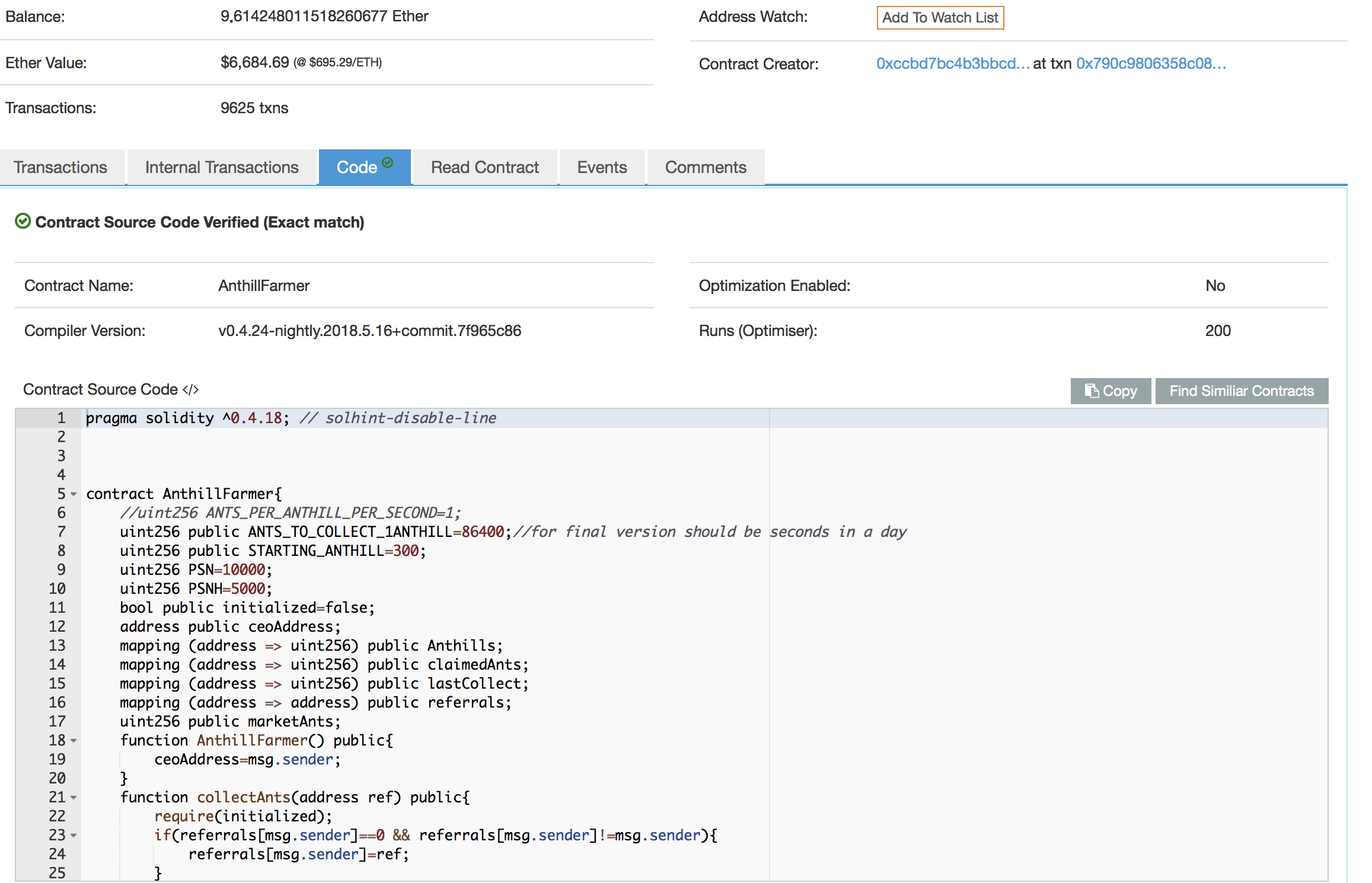 We couldn’t locate their actual website. One, which might have been theirs, says it’s coming soon. So how the smart contract is consuming all these transactions we do not know. Presumably it is front-running the farming process perhaps. Tsstss.

Now all these silly kids playing around have sent eth’s fees to 15 cent. That’s for simple transactions, smart contract transactions have been at 50 cent or more for a while now.

Ethereum’s capacity is fairly limited until Plasma, Sharding and all the rest, so not many shrimps can be farmed cheaply. There are ways, however, to fit more shrimps into eth’s chain. One such way is by bundling transactions through payment channels.

We are not sure, however, who created these smart-contracts, so we default to kids, and do so in an endearing manner rather than… which may mean they don’t have the knowledge or care to use the blockchain more efficiently.

They may just be learning and a farmville on the blockchain is quite a low hanging fruit. Still, it’s a clever idea in its own way. Pretty low effort on the part of the end-user while still creating a level of excitement for inexplicable reasons.

We give it 4 out of 5 as far as the end user is concerned. The shrimp worked for us perfectly fine, no hiccups, the sell functionality worked as well. There isn’t really anything else we would have wanted, except for payment channels to lower fees.

Now compared to other dapps that rating is unfair because this one is far too simple, but they did get our transaction to confirm, pretty quickly, so whoever came up with this probably knows what they are doing.

Who that is we don’t know, do email us with name etc and any comments if you’d like and we’ll update these pages.