We try them out by placing ourselves in the shoes of some ordinary person, so discarding our own familiarity with certain things or knowledge of certain things.

That means we might sometime come across as unduly harsh, but someone has to, and the aim isn’t to criticize, but to point out so that matters can be improved.

We won’t, therefore, hold back. Not in these test-runs which are focused not on the idea or any other aspect as the fact we are test-running them shows the idea has promise or interest. Instead, they are solely focused on the end-user experience.

When the end-user visits dai, they are met with the above screen, but not before a short video tutorial shows up. We sent that tutorial to a new tab, because after five minutes or so our laptop started getting a bit loud.

As we found out later, that wasn’t because of the video. Something within the dai dapp itself is consuming significant resources. We know that because once we close the tab then the computer turns all nice again.

Now looking at the above screen, it looks a bit complex, and it is. You have no choice, therefore, but to watch the tutorial, which we did.

It all starts with getting some weth, or wrapped eth. What exactly that is we don’t care, we want to get to the dai, so let’s begin. 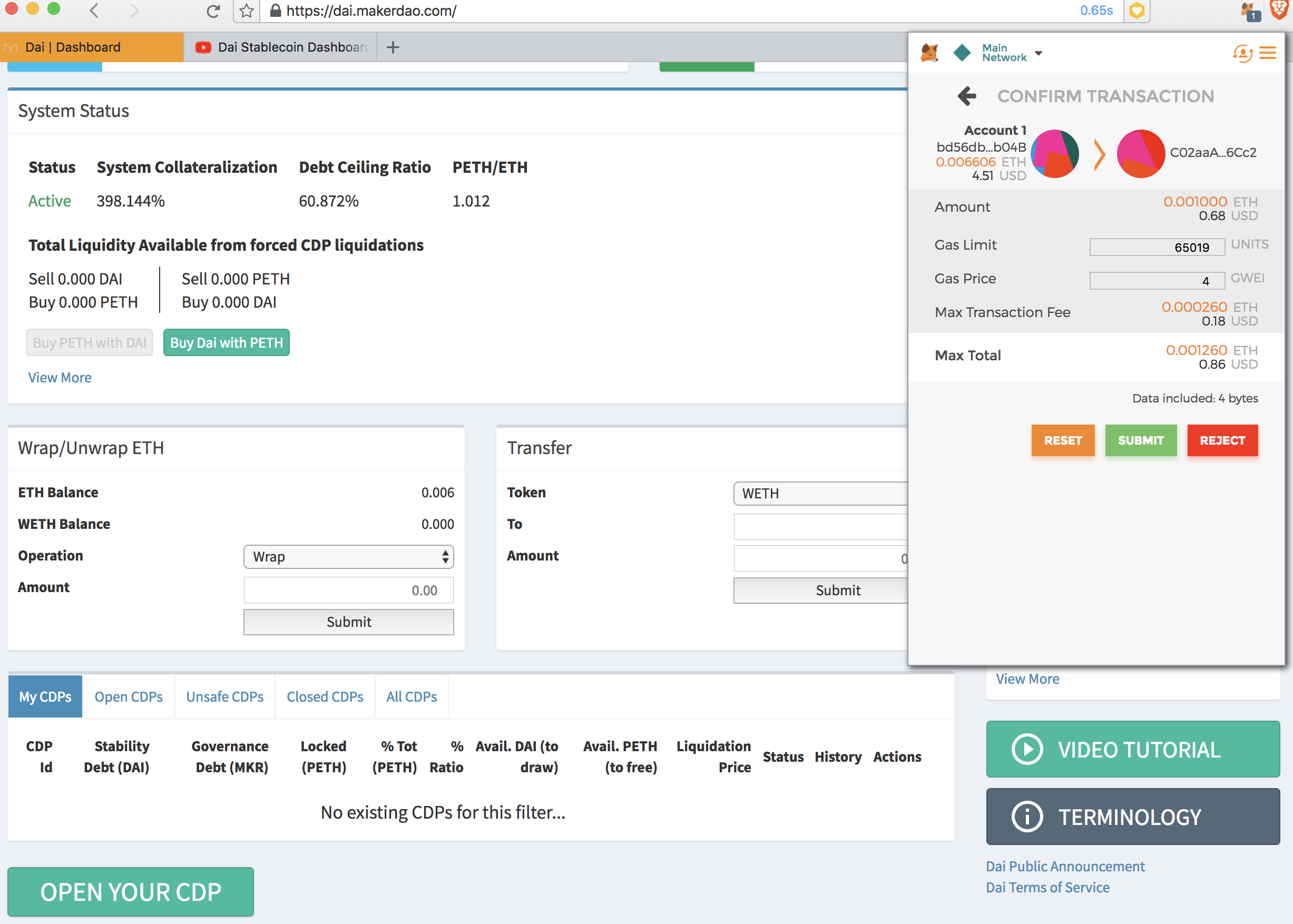 When we scroll down from the first screen, we see the screen above. You can see there the wrap eth function. We initially started with a small amount, but later on found out the minimum is above 0.005 eth, or around five dollars. So where it says amount, we entered 0.006.

You can see MetaMask wants money from us, about 18 cent. We submit it, but nothing happens except some little green bar is added to the screen.

You can see on the right some token allowance functions are approved, some are not. Before we got the weth, we had to first approve the Weth Join, then get the weth.

All this on-chain, of course, and all of it costs money, so we’re getting poorer and poorer to the benefit of billionaire miners.

But our journey into poverty has not even begun because now we need to get peth, or pooled eth. That’s another on-chain transaction. 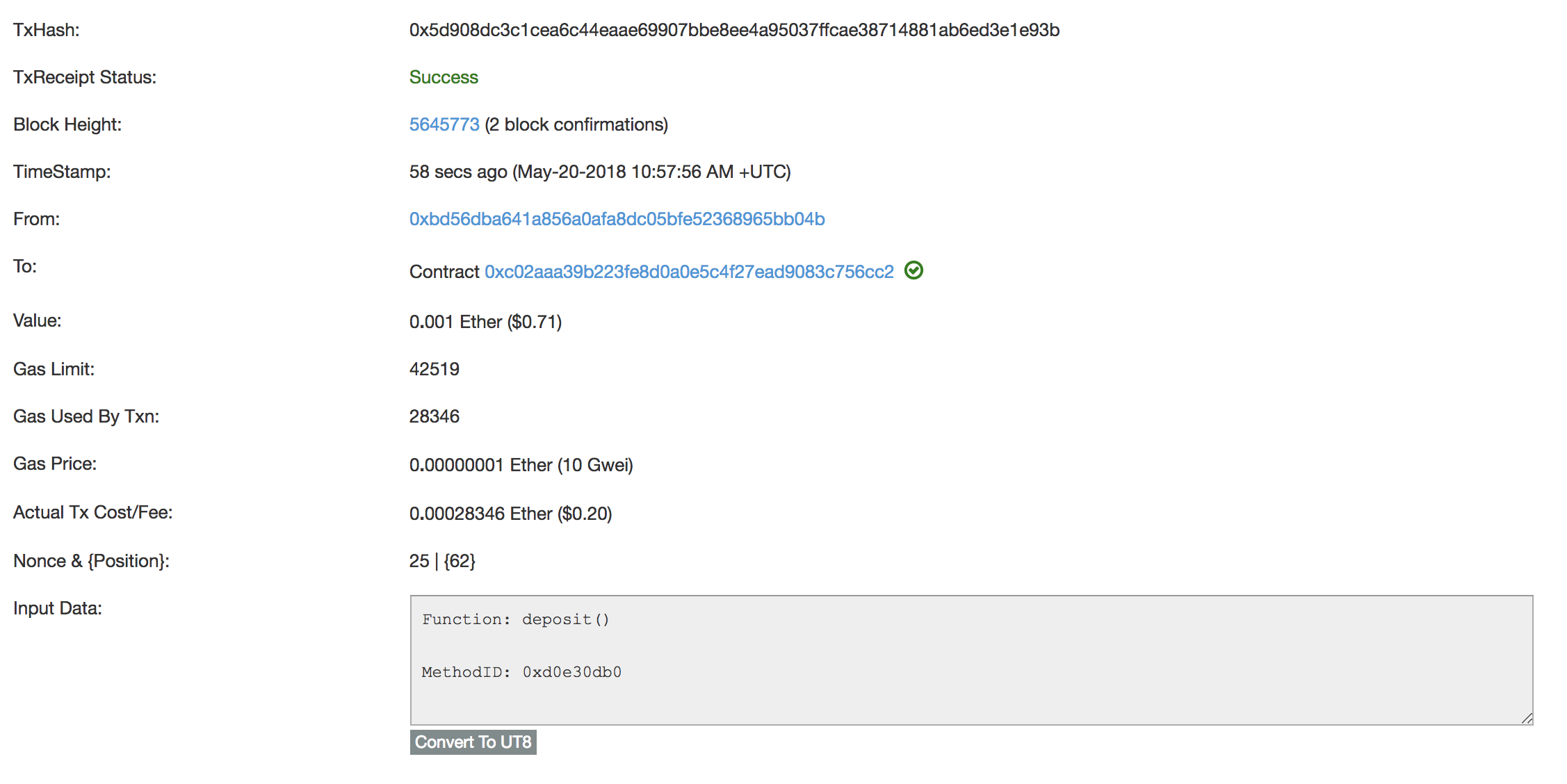 You see the value is 0.001 eth, as stated earlier we had to increase that a bit. But, fine, we have the weth now, we’ve turned it into peth, let’s open a CPD or a collateralized position.

Collateral because dai is created through the backing of eth. So you need around $1.5 worth of eth for each dai, which is stable at $1.

As you can see, two CPDs were open, mistakenly, because it looked like nothing happened when we opened the first one. That’s because the dapp does update itself, but it is a bit slow in that regard, so we had to manually refresh.

Now all this done, we click lock. First, we have to generally approve the lock function, then had to approve the specific locking of 0.05 eth. Finally, the above screen shows up telling us we have 2.4 dai. We click draw from one of them, and then the dapp tells us how much eth’s price needs to fall, 290, for our dai to be liquidated.

All of this is on-chain, each action requires MetaMask nagging, some fees, and a bit of waiting time for the transaction to confirm.

We now have one dai, as you can see top right. But how do we do anything with it because MetaMask says we have no tokens?

It does however have an add token option, so we tried that, entered the dai smart contract address, and wala, we have 1 dai. 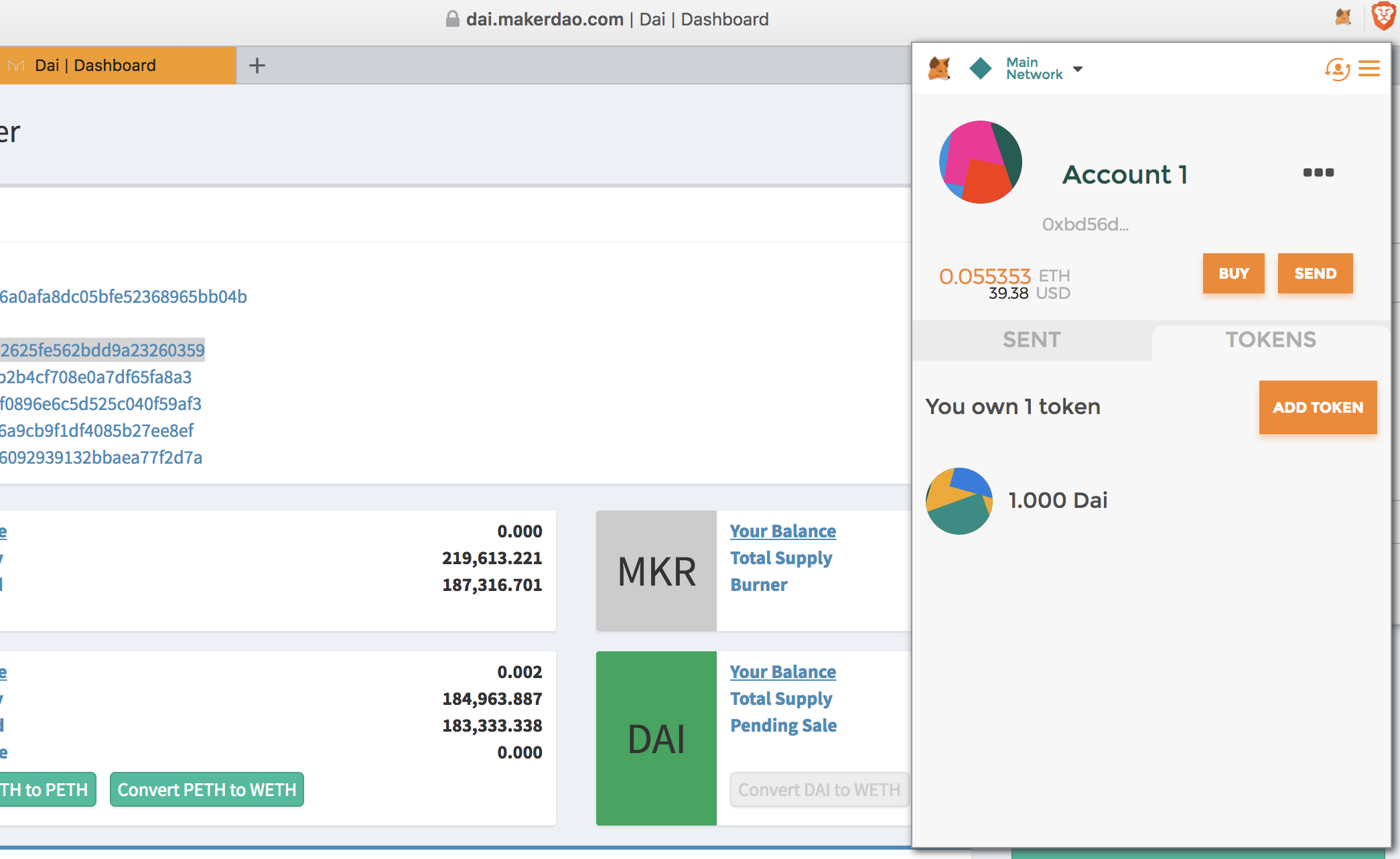 So, how do we move this now? That, unfortunately, we couldn’t figure out. MetaMask does have a send option there as you can see, but that only gives you the option of sending eth, not dai.

So the token is kind of stuck unless we close our collateralized position, which we are not going to do because we want to see what happens as time goes by, but if we wanted to we’d just click on “shut.”

Now that we’ve done it once, we can very easily do it the second time, but easy as in we know how to, not easy as in speed, convenience or cost.

Clearly there are far too many clicks here, and that cost us about $5 or $10 in fees. For the function of margin longing in a decentralized manner, perhaps it isn’t much, not least because once you have it in peth there would be only the open/close CDP on-chain transaction.

Yet clearly there is a lot here that can be refined considerably. That’s of course to be expected as this has launched only this December and has already managed to attract $37 million of dai.

The idea, furthermore, of turning eth into effectively dollars in a decentralized manner is sufficiently good to excuse some inconvenience.

But if we are going to give a rating from a user experience perspective we don’t think it can be any more than 1.5 or at best 2 out of 5.

That wouldn’t come as a surprise to the dai team, they are already working on a new front-end which may launch soon, but some considerable refinements would be needed here if this was to serve as a way of margin longing in a decentralized manner, in addition to dollarizing eth.

The main one would be to get those MetaMask naggings to preferably one, and even then once every 20 actions or so. That can be done through payment channels, state channels, or other second layer aspects that can bundle transactions.

Now this is a complex dapp so maybe 2 or even 3 clicks would be excusable, but more than that might be a barrier.

In addition, our test-running experience often depends on MetaMask. We have now learned that when a transaction takes too long and MetaMask asks you if you want to bump the fee, doing so actually works.

The initial fee was around 7 gwei, but we had to raise it to around 10 gwei to have it confirm within a minute. That’s a bit high because a lot of dapps are now coming out, but fees are still around 30-40 cent with an occasional one dollar.

However, dapp developers need to seriously take into account the current limited blockchain space and design the projects more efficiently by utilizing bundling of transactions as that will increase convenience for end users, while lowering costs.

On a final point for MetaMask, we don’t know why we have to manually add these tokens. MetaMask presumably should be able to automatically see we have a new token, and thus so show it, and should allow us to easily send it somewhere else if we want.

Beyond all that, we did enjoy the experience, but clearly there is a lot more work to do in order to move these projects towards considerable use and, we are sure, that work is currently on-going.