The currency had a bull run starting in early April that sent its price up to $850 where it met resistance.

Some sideway there was to be expected lasting about four weeks, but the currency instead fell to $650 and decided to sideway at around $700.

That’s while transactions have been going up, partly due to silly games, nearing the early January levels recently at around 850,000 within 24 hours.

While trading volumes have been somewhat stable at around $2 billion, but its ratio has been up and up, with eth now accounting for nearly 20% of the market share of all cryptocurrencies, including bitcoin.

That looks like a triangle within the time-frame of six hours, which means the market is consolidating and doesn’t know what to do or where to go.

If we zoom out a bit, that triangle is within quite an interesting weekly chart which could suggest that silly cartoon bull in the featured image might eventually learn how to hit red candles. 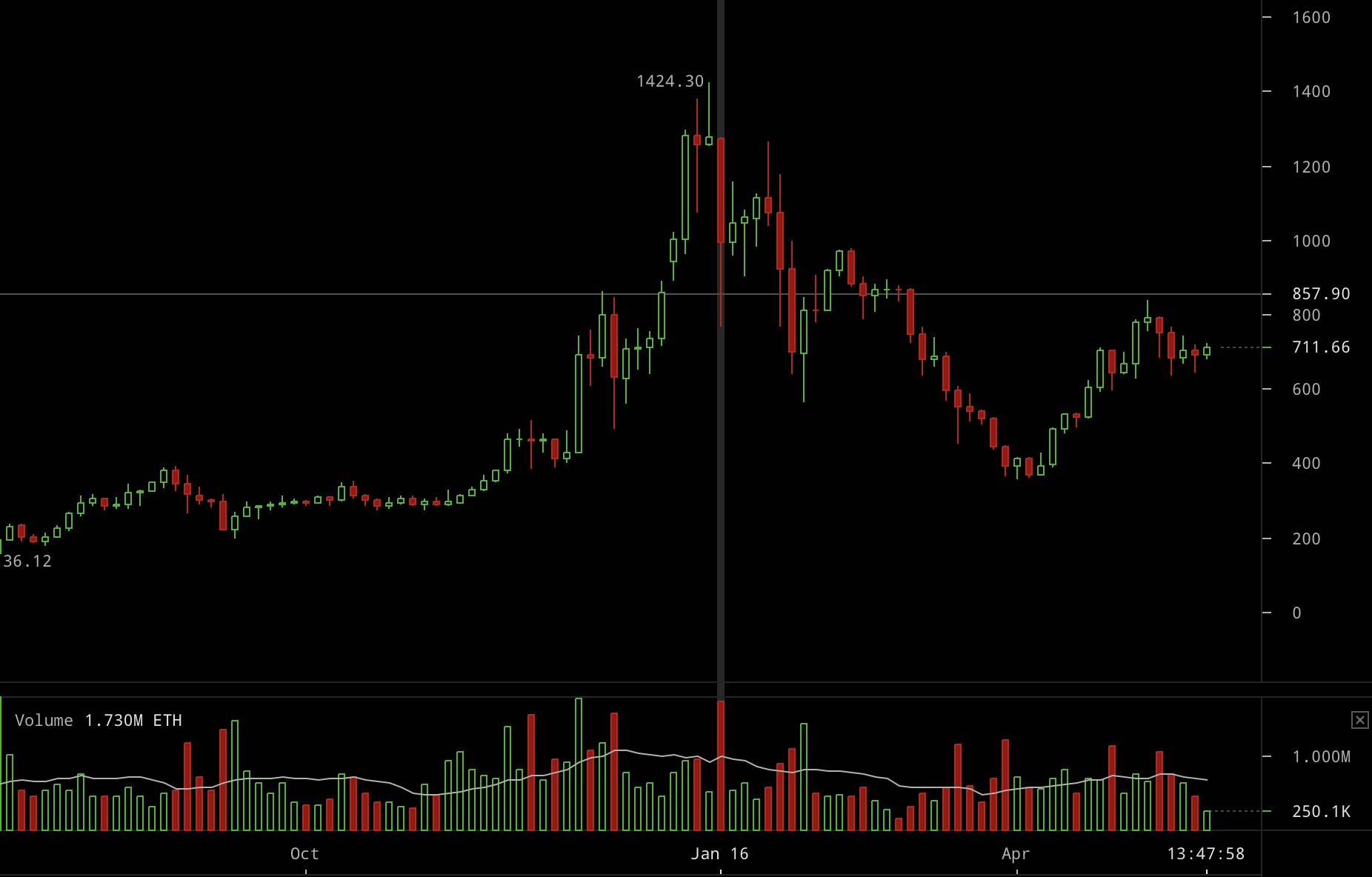 It’s a cup and handle, maybe, on the longest time-frame shown by crypto charts. If that plays by the book, you’d expect a stupendous bull-run, but crypto being crypto and prices being unpredictable, any surprise shouldn’t really be surprising.

At a wider level, this sideways action is quite understandable. First, at a technical level, $850 is clearly a resistance, so some sideways there was to be expected.

Secondly, where fundamentals are concerned, there are two narratives. On the one hand there’s banker’s SEC, which doesn’t really like this space very much as they’ve probably learned of it from bankers who of course would rather not get disrupted.

They have an important decision to make regarding the future of innovation in America as far as this space is concerned. That being whether they will consider tokens that have a running network to be utility tokens, or commodities, even if they came into existence through an ICO.

CFTC thinks they are commodities, and has even warned SEC they might take a different view if SEC says they are still securities. Yet, here at trustnodes we expect the worst from SEC, going by their past behavior, so it wouldn’t surprise us if they make a complete fool of themselves.

Whichever way, the market would gain some regulatory certainty so everyone would know where they stand in regards to the US jurisdiction, allowing entrepreneurs to decide whether they want to work with US regulators or go to another jurisdiction.

With that on the background, a number of dapps have now launched creating a fairly decent ecosystem where you can actually do things with your eth, including playing silly games.

Many individuals now across the world are taking advantage of ethereum’s open platform, so coming up with new things daily. Making this space a bit more interesting and thus potentially raising demand for eth in order to use all these dapps.

Those two developments are sort of balancing each other if we go by the price action, with the market thus uncertain at this point where it should go.

How long that will last remains to be seen, but we doubt it has much to go now until it moves one way or the other.