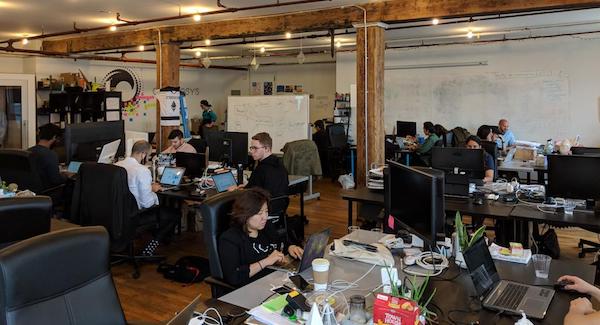 A developer at Ripple has apparently received not one, but two, $1 million signing bonus offers, according to Schwartz, as flush with cash new start-ups and established companies alike rush to implement blockchain tech.

A shortage of talent, however, continues, with it highlighted as far back as 2016, but following the boom of 2017 the talent crunch is now beginning to bite.

Pretty much all global brands are now piloting or testing blockchain tech, but they face fierce competition from ICOs which have sort of begun at the same time, and thus are fighting at the same time over a small pool of talent.

So sending pay packages to dizzy heights. $120,000 for blockchain dev entry level apparently. Half a million for those with three years experience.

ConsenSys alone is looking for some 200 devs. While the Edcon developers conference barely had one presentation end without a statement that they are hiring, so inviting individuals to reach out.

Resources therefore have been allocated to educate a new generation of solidity and blockchain developers. The Loom Network runs a very nice and accessible tutorial. ConsenSys has the Academy, while universities are offering more and more blockchain related courses.

That means our, probably the first and maybe still the only, ranking of universities for blockchain study needs to be updated in due course.

The 2017 version, however, is still very informative, and perhaps the very best part of it is not what we say, but the very fine comments it has attracted.

This shortage of talent will probably continue for the next few years if not the entire decade or longer, but the best part of it is that you don’t even need to engage in formal study.

One can easily spend their weekend or their spare time in the afternoon to hands on try coding solidity, with decent knowledge probably so gained in a few weeks or months.

Persuading employers, however, that you have such knowledge may be a different matter, but github always helps and one can’t really have a better internship than just contributing to other projects on github.

That may get your name out there, and might even get you noticed, but competition for positions will probably likewise increase as few can really turn down one million dollar bonuses.