The most controversial ICO is to finally finish in precisely 9 days, just a year since it begun, with an estimated 2-3 million eth having been raised.

According to Santiment data, more than 1 million eth, worth around $600 million at the current price, has been spent in the past 30 days.

While their smart contract shows they still have more than 750,000 eth, making it at least 2 million, while plenty more is known to have been sold previously. Thus giving a more correct estimate of 3 million eth in total, or 3% of total supply, or some $2 billion.

Who sent all this money we do not know. Presumably individuals from across the globe hoping to strike a 100x.

Yet what exactly they bought or what exactly this token is, no one knows from a legal perspective because their terms of sale state the token is effectively nothing, but even though it is nothing Americans or the Chinese can’t have it. 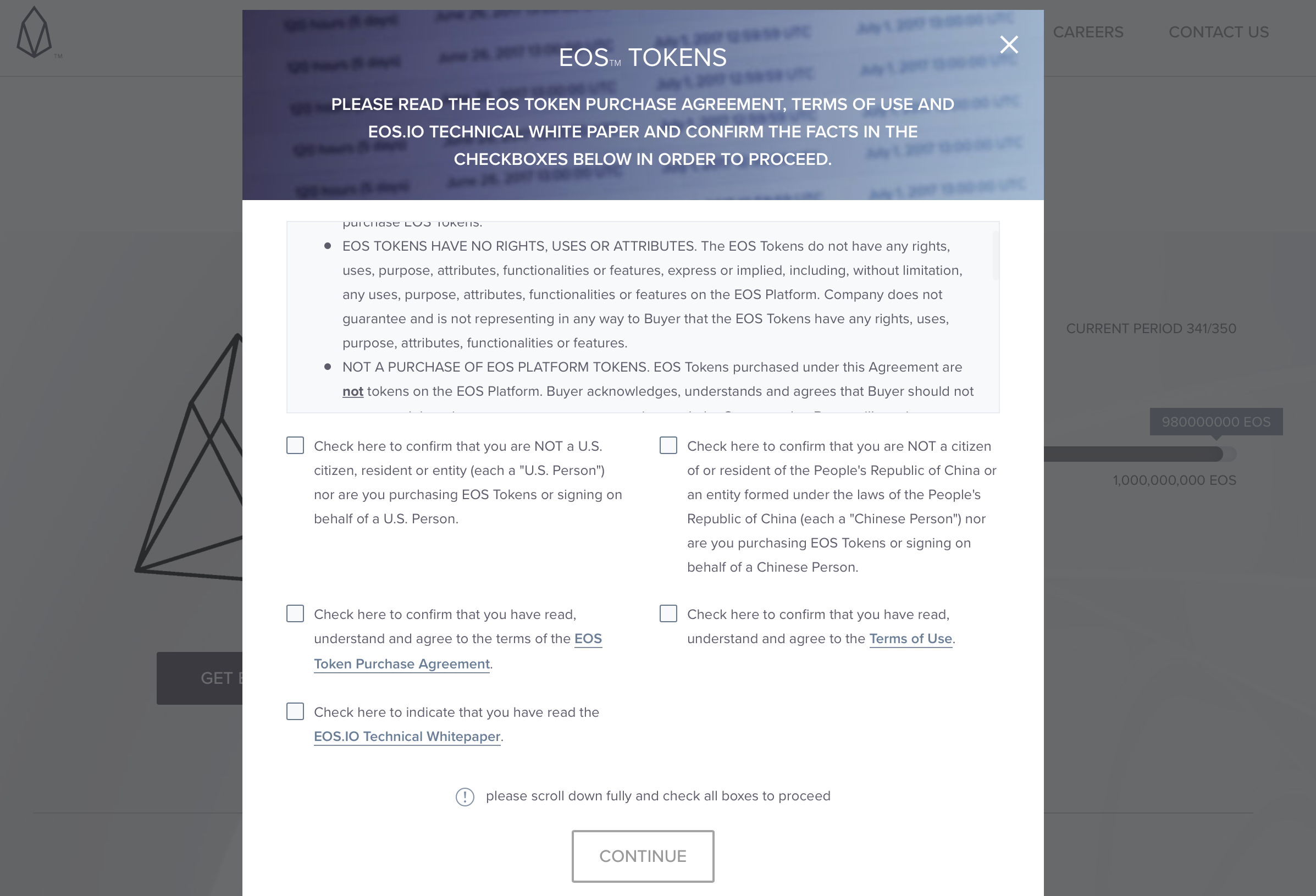 Empty words, of course, because EOS was advertised at Times Square, but this chapter can now finally be closed as far as ethereans are concerned who still need a bit of patience for EOS to distribute the remaining 750,000 eth.

All of this exercise was to create a new delegated proof of stake (DPoS) blockchain which is to launch on June the 1st.

Some 15% of the tokens need to vote for one of these chains for that to become the chain, and then we get back to familiar territory. But how these tokens will vote exactly we do not know.

Presumably first they have to actually be claimed. That process has currently begun, with around 41% of the total tokens registered to claim the actual coin in the EOS blockchain. 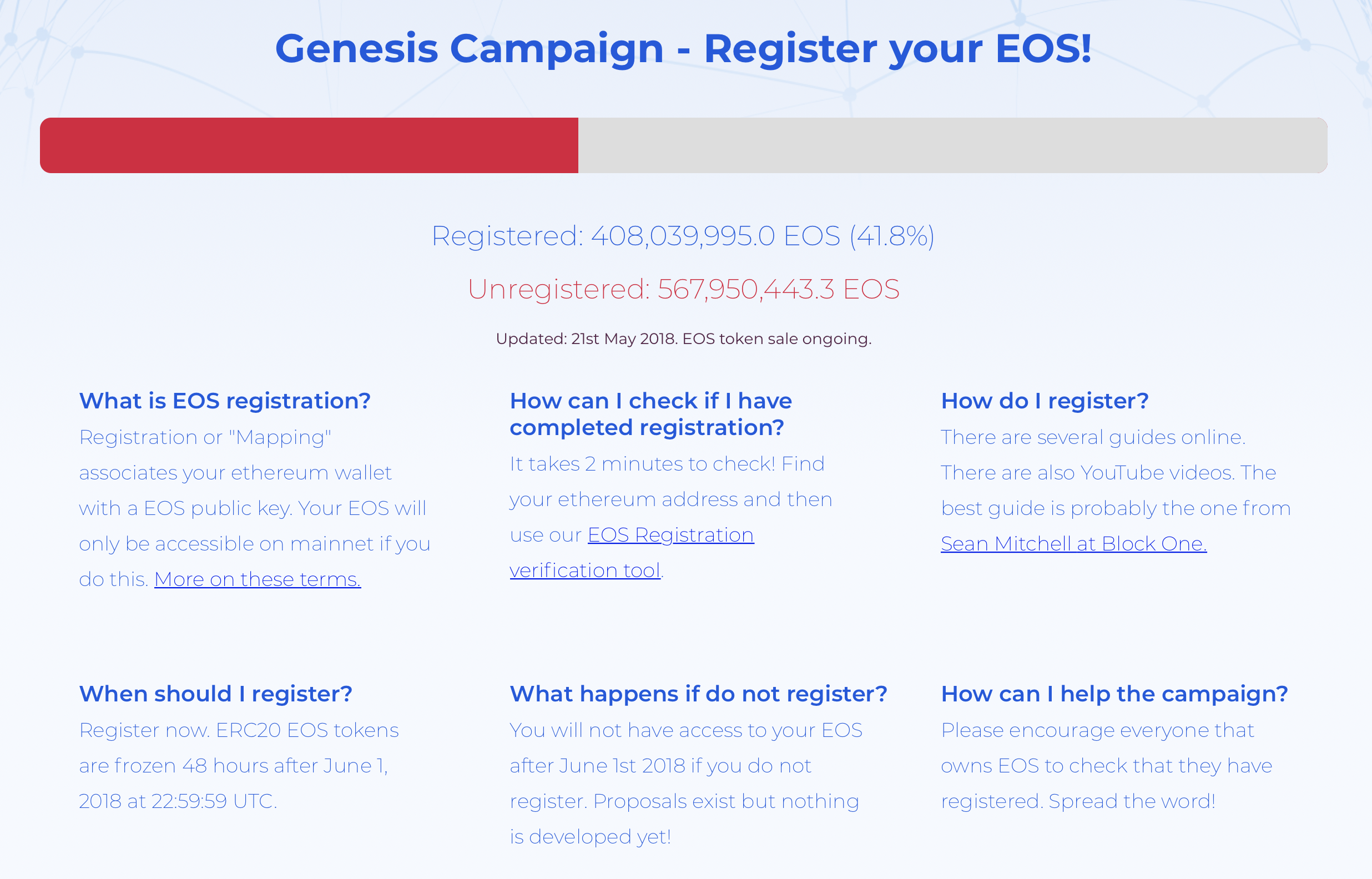 As that says, unclaimed tokens will be frozen on or around June the 3rd. We still however have not even begun the actual process, because the 21 EOS parliamentarians (block producers) who actually run the chain by basically staking coins, have to be voted in.

They are voted in by individuals going to some website, but we can already guess that Bitfinex and Bitmain will probably be selected as well as others who have stood up because we’re not sure they even have more than 21 candidates.

Presuming demand remains the same, price would rise you’d think. Then once that freezing period is over, all that supply floods the market and the project is usually discarded to repeat the process.

That’s, at least, what happened in the two previous Dan Larimer projects, BitShares and Steem. The latter gained some attention in five minutes of fame due to this dual freezing of supply, then went into some sort of irrelevance with Larimer so moving on to EOS.

What will happen this time remains to be seen, but there isn’t really much innovation here, if indeed any. There is instead arguably some regression. Trusting Bitfinex isn’t quite our idea of a public decentralized blockchain.

Yes, you can potentially vote them out, but if we wanted to engage in political campaigning we’d be running for a proper parliament where we can actually make laws.

The point of public blockchains is minimal, and preferably no, human involvement. Of course there may be some rare cases when you can’t escape it, but those exceptions prove the rule.

While in EOS they do not appear to be exceptions. Moreover, freedom is quite limited. You can probably fork the chain maybe in a year, but if demand does really pick up you probably wouldn’t really be able to run an EOS node without some considerable expenses, and thus you wouldn’t be able to really keep the parliamentarians accountable by in effect firing them through forking to a different chain.

The trust machine, thus, needs require no trust. Certainly not an exchange or 21 well connected individuals who can easily collude for their own benefit and you wouldn’t even be able to fork them off.

Nor are we sure how this voting out would work because in combination the 21 presumably have enough coins to keep themselves voted in.

Its current fame, therefore, may well be short lived, but lacking a crystal ball, we will have to wait for the judgment of time itself.