It has been a long time since we felt so excited about our first day at school, but for a brief period we could re-live it once again as we packed our bags to visit Loom Network’s CryptoZombies Solidity Tutorial.

First, we don’t really know how to code, but have some vague general idea of if/thens, that sort of thing. Arguably this tutorial is very accessible even if you have no clue whatever as much of it is just copy pasting sort of thing, but if you do have some general idea then it might be easier to pick up.

First, you probably need MetaMask, unless our browser without it didn’t function for unrelated reasons. You’re then met with a screen like this.

No sign up or anything, you just click get started, and so meet a new screen with some words and some graphics.

We won’t spoil all the lessons, only the first one which is about 14 chapters. So you obviously click on it:

Again you don’t really need the experience. Our Javascript knowledge is pretty rubbish. Having some general knowledge of what’s an array, what’s a string, might help, but the tutorial does sort of briefly explain them to give you some general idea.

This is all very much a hands on approach, which is really the best way to learn to code. Obviously you won’t become an expert once you go through it, our first lesson took only about two hours.

But once you’re done you can maybe try solidity templates perhaps on testnet, modify a thing here or there to see what happens, maybe even try to create some dapp or something and so with the help of google, templates, etc, figure out how to get it to do what you want.

That’s probably the best way to learn any language really and it isn’t much different for Solidity. So let’s meet our zombie.

This is just telling us what we’re going to do. We’re going to create some random zombies in a smart contract by using the language of ethereum’s solidity.

Mind the commas. They can cost a lot of money. Don’t worry if the above screen looks a bit scary, we are not going to engage in any real maths, just basic algebra. The moon maths stuff we’ll leave it to Vitalik Buterin and his eth devs crew.

The zombies are clearly trying to make fit Vitalik a thing. Vitalik eat 100 hamburgers that says. Hopefully with some cheese and some salad and some fruit to get healthy fit.

On the left is what we’ve done. It would be a bit unfair to say we’ve done it by only copy pasting, sometime the tutorial does try and push you a bit into the sea to sink or swim.

They’re always nice and provide the full answer however, so you won’t be tripping or anything. Mama Loom is very much hand holding babynodes.

Ah, we think this is the bit where you learn how to create those spam tokens etherscan shows you. Something to do with view and pure and private and public. We have no clue (we do, but go learn it yourself in the tutorial.)

Well, we’re finished. We can now probably more easily read smart contracts and have some general idea of what they do, which is why we thought trying the tutorial was a good idea besides letting you all have a little bit of a feel for some hands on solidity.

Obviously in reality we have barely started. We have five more lessons to do because we’re going to create the whole thing, including the web3 site, the front end, the lot.

But we’re not going to spoil all the lessons, we just wanted to give you a bit of a taster so that you can try it yourself because there is a treat at the end of the first lesson. 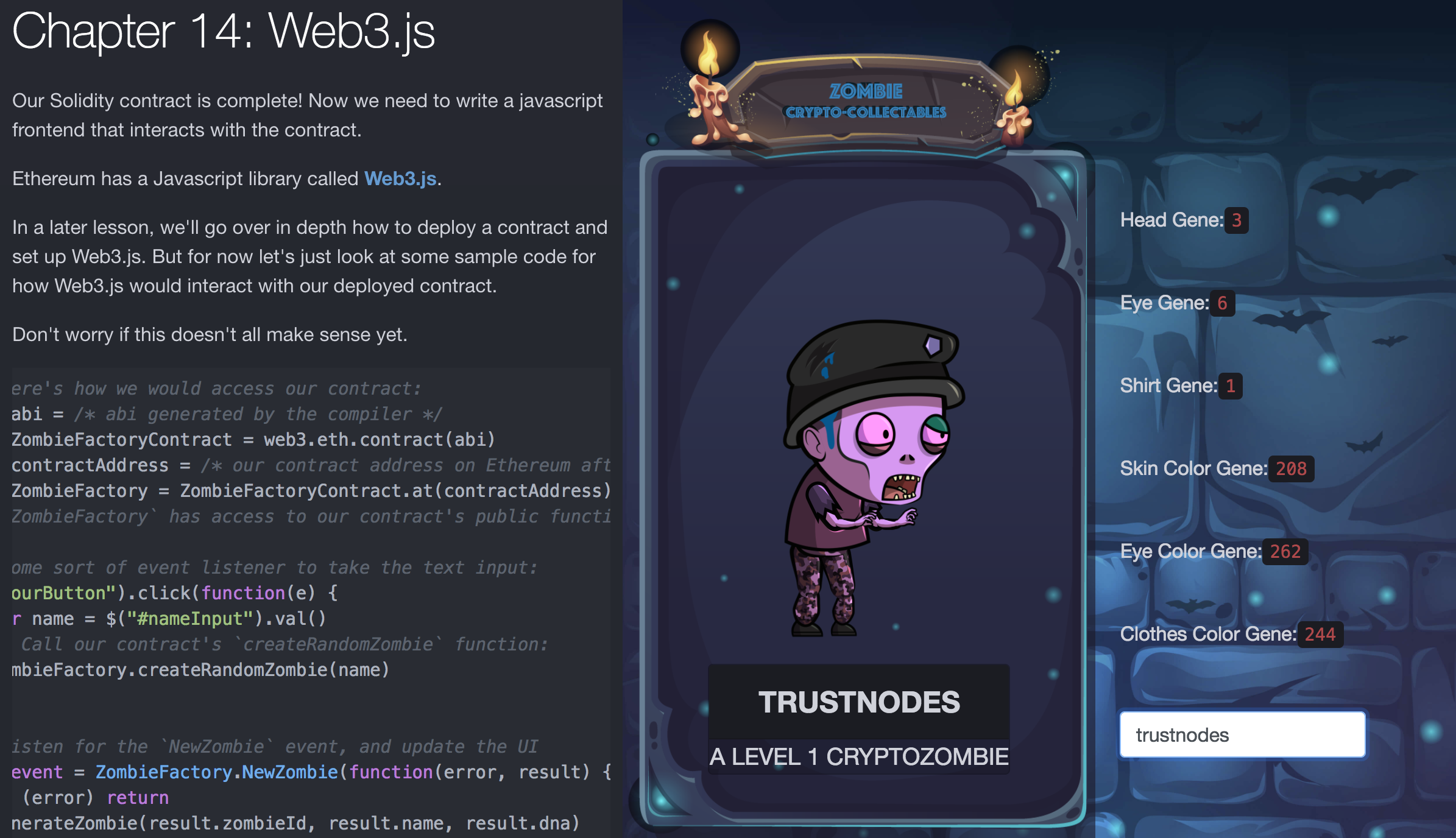 That’s what our zombie looks like. It responds to the name we have entered, so if we change it to babynodes the zombie looks different.

We doubt you’ll bother twitting us what your zombie looks like, but if you have a few minutes to spare with the weekend coming, there’s hardly a better way to spend your time.

That of course includes anyone that actually wants to code something, but it also includes investors etc, people that might come across dapps and contracts somewhat often, because it might give you a general idea of what the code says.

Overall, this is a very accessible tutorial, works fine, pretty smooth, couldn’t ask for much more really, 5 out of 5.