We all know Satoshi Nakamoto invented bitcoin, the world’s first decentralized digital currency, but few might be aware that the blockchain was invented by two American academics working at Bell Labs.

Physicist Scott Stornetta and a cryptographer Stuart Haber came up in the 90s with a method to preserve history by time-stamping documents which where then bundled into a chain of blocks for immutability.

The meticulous Nakamoto of course credits them for the achievement, citing their work three times in the bitcoin whitepaper, with a guest editorial at the Wall Street Journal so once again reminding us of just how much Nakamoto did not invent.

He, of course, did not invent the cryptography that was used in bitcoin, such as Sha256 and all the rest. Allowing the National Security Agency (NSA) to be somewhat coy and implicitly claim some credit for bitcoin’s invention.

The NSA, of course, works with information, how to keep them secret and how to break those secret methods. In many ways it is a centre of cryptography, working with or copying from renowned cryptographers.

It is quite probable Nakamoto was acquainted with much of it for his choice of some of the crypto used in bitcoin was to some cryptographers surprising for not being quite what someone less acquainted would have used.

Nakamoto, of course, also did not invent the blockchain. He did not invent Proof of Work. In a way he invented nothing more than how to put all those parts together to get the phenomena we now have.

So was he an individual genius? We’d like to resist that suggestion as much as we can, as much as we may well want to romanticize the perhaps young genius probably man.

But as much as we would like to think it is or was a team, a university or a research team, it is starting to become harder and harder to maintain that the person who wrote the whitepaper and the first version of the bitcoin code was not one, maybe young, genius, probably man, maybe British.

The center also is encouraging educators to update their lesson plans to include Viper, an experimental code language similar to Python, he said.

‘We need to help get the workforce going now,’ he said. ‘It’s crucial that we accelerate the pace of innovation for security technologies.'”

Yet as we’re sure many of you would have yourselves seen from the response of your own siblings, the boy or girl is far too young to study such complex code, they often say.

But new things understandably take their time, and the huge bureaucratic machine that concerns education likes to take quite a lot of it.

And if education is conservative, wait until you hear about lawyers. That stiff upper lip ancient profession that still wears 17th century wigs to portray tradition, authority and the rest. 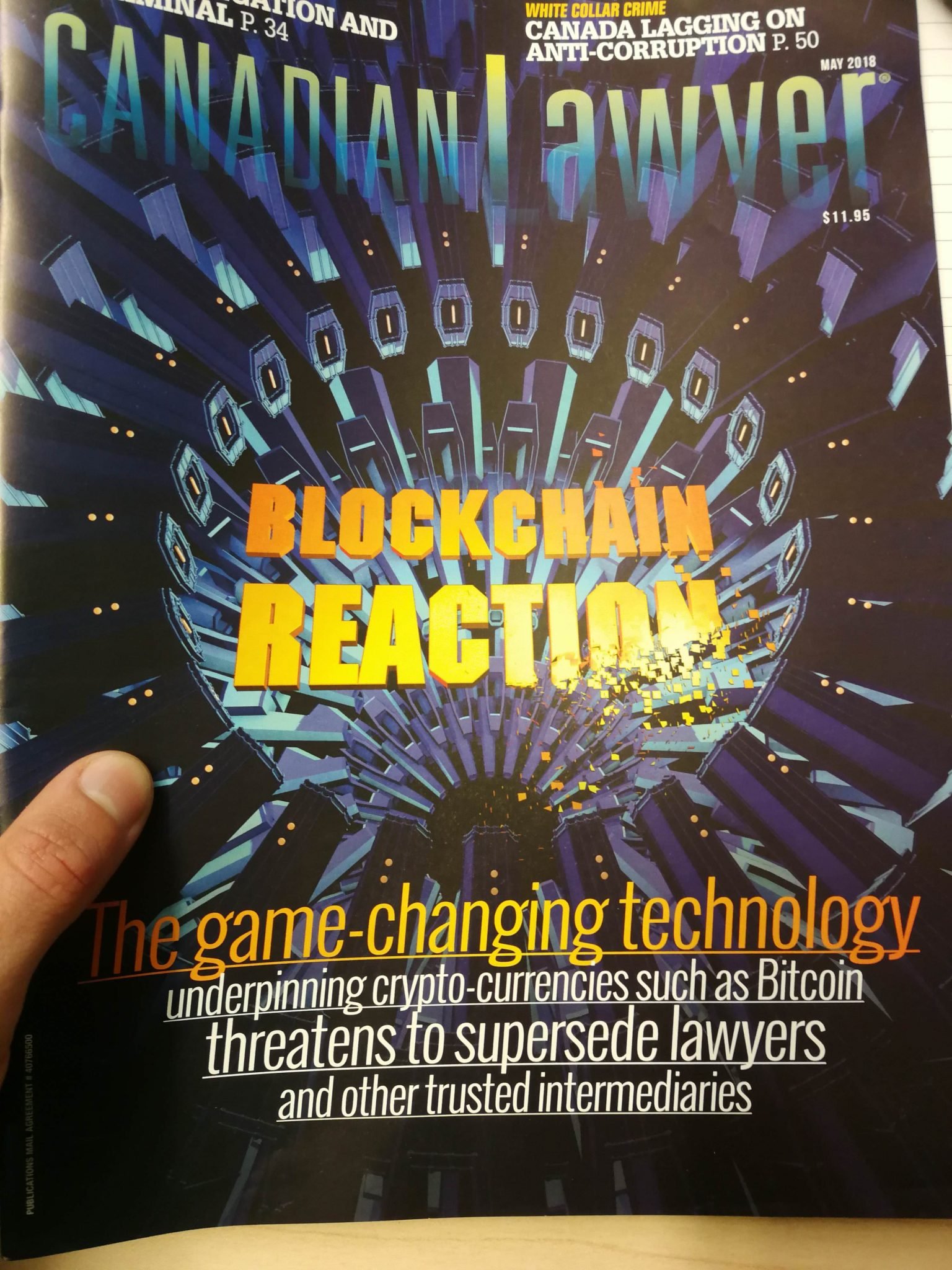 “Not long ago, the idea of a self-executing contract enshrined in computer code was barely more than science fiction, the sort of idea that legal futurists enjoyed pondering. But with the rise of blockchain technology, so-called smart contracts are starting to enter the mainstream.

While some lawyers are wary, others are working on frameworks that would allow practitioners, even those without technical expertise, to easily work with smart contracts.” So says a law focused news-media.

As you may have noticed in this space, there is first a trickle then an avalanche. Lawyers on the blockchain? Will they really be without a job soon enough?

The problems here are many fold. First, there are few that have an expertise in both the legal system and how to code. Second, the legal profession is the most guild like of guilds. Better than anyone else they know how to put up barriers and shut the door. Third, they are so busy and overclogged they barley have the time to breath let alone try this innovation thing. Fourth…

We could go on, but the point is made. The legal industry is ripe for disruption, but the game there is more dangerous than even disrupting money. Which is why we’re all sort of waiting for the profession itself to take the lead and try and make their way to this century.

However, ethereum’s nature of being a platform might put some needed pressure and incentive on the law profession to stop becoming fatter and fatter and lean up a little bit. Yet with the horizon now becoming so wide, what can dance and keep on dancing remains to be seen.

Sputnik, once a dirty word no one would utter for being the face of the then Soviet communist government, now finds some access through the internet. They have an interview, blockchain related of corse, with the interviewee stating:

“At Universa we’ve created halal money, that’s smart cash, which you simply can’t spend on alcohol and tobacco in the Islamic world.

So also there’re ideas to work with governments, with central banks, to allow them to issue digital cash in their currency, not a cryptocurrency but centrally issued 100 percent controlled new digital cash, which is way cheaper than the paper money, which you can control from A to Z and it’s a more efficient way of doing things and our wallets would be our mobile wallets. All of us have smartphones currently.”

Smart cash centrally controlled with a digital payment system that does not rely on banks. Maybe, the Swiss will have a say on that on June the 10th in a binding referendum.

We doubt the Swiss will go Brexit way or even the Italian way, but something is being missed here. Of course there is something to be said about inflation or real money that comes from an actual tree rather than fake apples/money that can be produced at whim, but that’s, in some ways, a very simple upgrade of money.

Simple as in, because it isn’t very simple, but simple as in you can have that while also having a very 21st century aspect of it, a very real upgrade of money.

We’re talking about smart contracts, about codable money. What the Russian calls smart money sounds a bit like a scan of a paper document. Yes, it is now digital, but it’s not really, it’s a picture.

Crypto, or real digital money, is codable. That’s a stupendously important quality, especially once the low hanging fruits stage has passed in some years and people try to jump a bit to catch the ripe figs.

Can such codable money be done in a centralized way whereby the Central Bank can at whim dictate how many tokens to print? Maybe, but it wouldn’t be quite the same from the Central Bank’s point of view for once they turn money into code then coders will start playing. Nor would it be the same from our point of view because we don’t see how they can provide fridges with a bank account in a centralized way.

So it would be a hybrid of sorts, a bit of an upgrade while being a bit more limited, which is why they’re probably taking the wait and see approach while trying to show they are doing something until they can see all fine but the waiting part means they are now Nokia.

That’s at least what you would think if we had a crystal ball, which we don’t, so off to South Africa. The fairly rich nation with some British connections is seemingly just starting to learn about bitcoin.

By that we mean the fathers and mothers. There was a fairly terrible event there which thankfully had a happy ending, so bringing our attention to South Africa and seemingly theirs to bitcoin.

Google trends show South Africa as the more interested nation to ask about bitcoin. Ethereum interest there is high too. That’s apparently turning into some action, with South Africa based Luno, a crypto exchange, revealing they have processed some $5 billion worth of payments with 2 million users.

Two million, just in South Africa. That may well mean if crypto was a nation it is now bigger than even America. Billions more to go still, perhaps, but when you look back it does at some point start to sink in just how much this space has grown.

And how much further it may grow may well be decided this year. Regulators, overall, have sided with supporting innovation, scalability is conceptually solved and even, perhaps soon enough, concretely so.

What can be done or how this tech can be utilized now pretty much everyone is aware, so making this a very unique time indeed.

At the end, little might be shown but that the carousel revolved. But if we compare that carousel to its previous version, the older one might look very old, while the one we might have, very new and also very shiny.

As the wheel revolves, perhaps nothing might be really left but our experience of it all. The pleasure that was, the times that were, the party across the globe.

Meaning, and the search for it, is what drives man and what drives the globe. In this unique point in time, when much can be seen but is yet to be built, that meaning availability is probably at its highest point.

Great wealth may be gained, so too great names, the nuove rich may rise again. And in the process they’ll have no choice but to make this all a better world and a better universe.

It is that knowledge, instinctively gained, that gives this space that feeling of love, even awe. Build young man, build the world.