“When we made our investment in CryptoKitties, I don’t think I actually understood… you are building something that can be a platform for other developers, I didn’t get that.”

So said Fred Wilson, influential Silicon Valley VC, at the third Token Summit held earlier this month while speaking to Dieter Shirley, founder of CryptoKitties who himself says “we didn’t see it until after it happened.”

A new dapp can then incorporate the home, and of course the kitty, and let you buy a job or whatever, a business. And in this very uncreative world we are creating for simple illustration, a high street or a shopping district can incorporate all of the above.

The kitty, alone, owns all of this and if you sell the kitty, you’re selling the home, the job, and so on. So if you’ve given the kitty some great experience and he is now a renowned VC, you would think others might place some value in having that digital cat.

The kitty, moreover, may well be immortal, or at least as immortal as the Oxford University’s still standing original buildings. As long as even one individual keeps running an ethereum node, the kitty “lives.”

In 500 years thus, those that follow may know little about us, but they may well know what the kitties did, and if they had care they could even replay all of the kitty’s “life.”

This has never been possible before. You can easily go back to old games for nostalgia, but you can’t really go back to your own game unless you kept the whole set all these years and it still works.

Nor can outsiders really fully incorporate your own game and modify it as they please by adding to it whatever they wish, extending the competition not just between games but also between improvements to games.

And we are talking about games because there is a reason why the young like them so much. It’s the best way to learn. The kitty we have created above is more about us, the humans, than the digital cats.

Imagine if your home and ownership of it and how that changes forever lives and is never forgot. Imagine if your will can enforce your wish for a certain art-pieace to be owned by the home itself, rather than any individual. 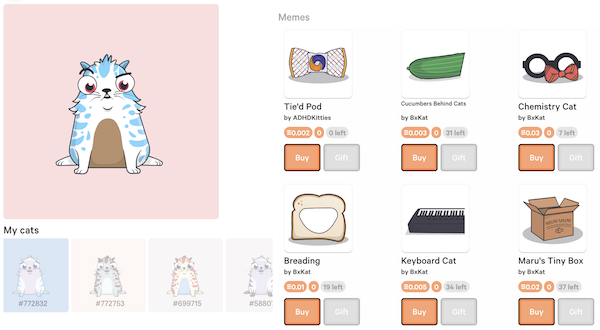 Our creativity is hardly higher than the many smart kids who decided to give the somewhat bland kitties some cool hats and dress them up or race them with one another, so we can’t come up with many examples of tokenized ownership in a more real life setting.

And much of it may sound futuristic, but in many ways it is a mere incremental improvement of what we already have. Take a business. It owns offices, it owns cars, it may own trains or airplanes.

All paper based or centralized, all potentially easily fungible, all fairly intransparent and so on. Tokenizing them all wouldn’t be a revolution, but then having electricity rather than a candle at night isn’t such a revolution either.

It is a “mere” improvement, and yet once one experiences such new world the old might look very dated indeed.

But to tokenize all these things, and thus automatically have them “talk” to each other, won’t be easy because all that paper stored around in office cabinets will be significantly condensed yet will still require space for the blockchain digital data.

Considering so much value rests on the blockchain in this world we imagine – and since we can imagine it, it may well come to be – the lack of central control is not a luxury, but an absolute necessity for if anyone can change say home ownership and we have no way of seeing it was changed then there is no improvement.

We say improvement, rather than use, because current home ownership data rests in centralized databases held by parties we have to trust who sometimes, especially in the developing world, do abuse that trust.

In the blockchain world, as far as records are concerned, there is no choice of abuse except for during the initial entry of ownership. Afterwords the token is ownership, although how exactly that would work in a realistic setting is a challenge being addressed.

For that to remain the case, all this data needs to be stored by at least 1,000 nodes scattered across the world, but preferably 10,000 which would be very sufficient and arguably if it goes any further it would be pointless (although the more the better but once we get to 100,000 then it may well be too much waste of resources).

To store all this data in 10,000 nodes within our lifetime is a challenge that is being worked on with plenty of solutions that will start coming out later this year or next year.

To ensure we leave it to our children too, and thereafter, that challenge will probably continue being worked on with it itself perhaps leading to some breakthrough in storage, computing, or other aspects.

So potentially allowing us, within our lifetime, and perhaps in the next 5-10 years, to taste this world where ownership is a platform, something radically new.

Where the tokenized property can be improved by anyone else without requiring your permission or anyone else’s and of course such improvement would be driven by the potential to earn money for it.

It is a very new world in many ways, and yet old. It will probably slowly, unnoticeably, incorporate itself within the fabric of our society, until one day we look back and think: wow, that’s how it used to be.