Conclusive evidence that EOS has sent 200,000 eth to Bitfinex has now been provided by the ethereum public blockchain.

The EOS crowdsale smart contract has now finally been drained with just $1 million worth of eth left there at the time of writing.

The year long ICO is to finally end at around 11PM London time, which translates to late afternoon in America and very early morning in Asia.

Around that time or soon after the EOS blockchain is to launch, but rather than being busy with those preparations, the company behind EOS, block.one, is seemingly instead busy with moving millions in eth. 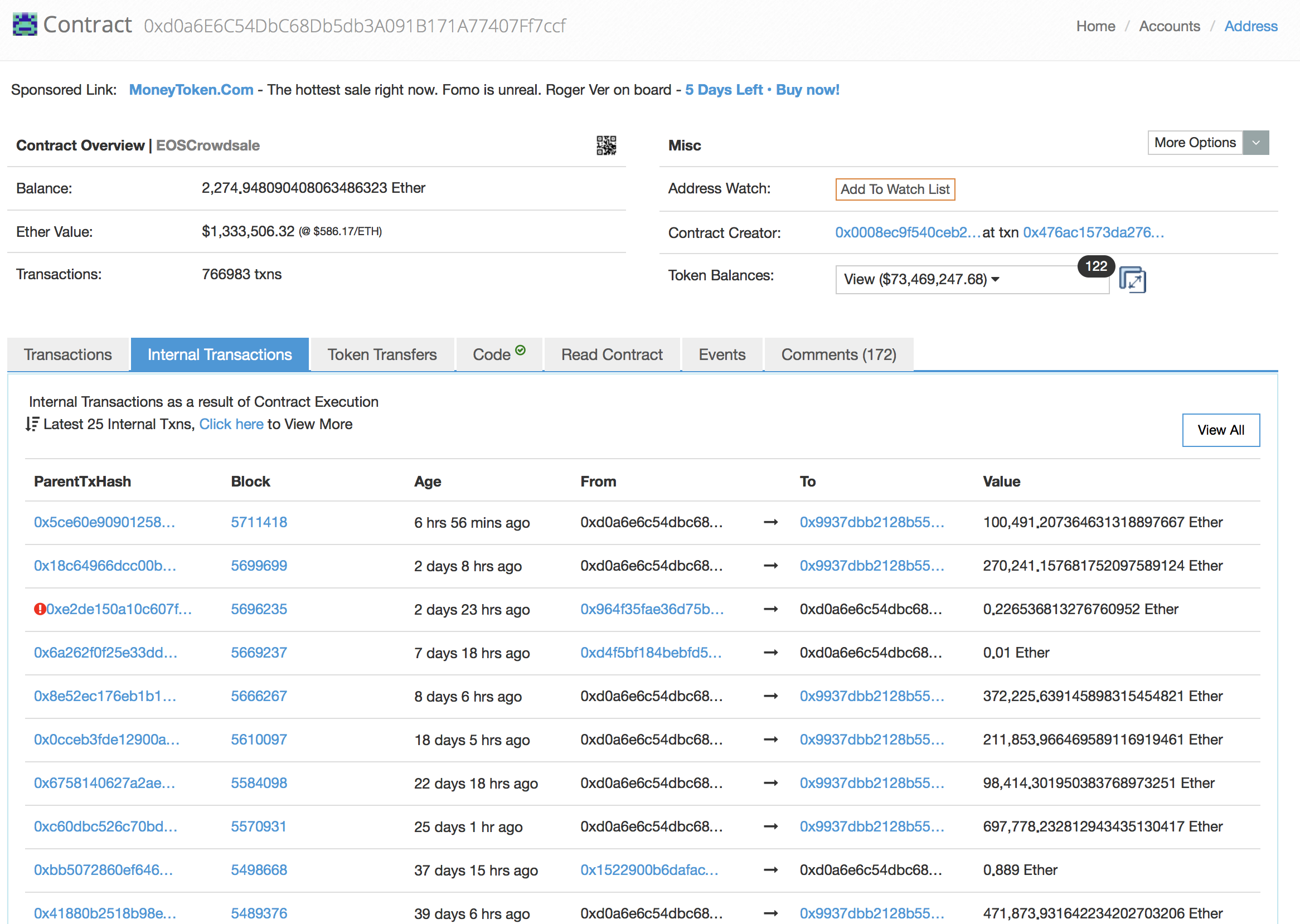 That’s the EOS Crowdsale address. All of its money moves to an address tagged EOS owner, which starts with 9937. That address in turn currently has 737,000 eth ($432 million).

That’s down by around 400,000 eth in combination and sure enough Santiment data shows EOS has now spent 1.75 million eth in the past 30 days, up from around 1.3 million just a few days ago. 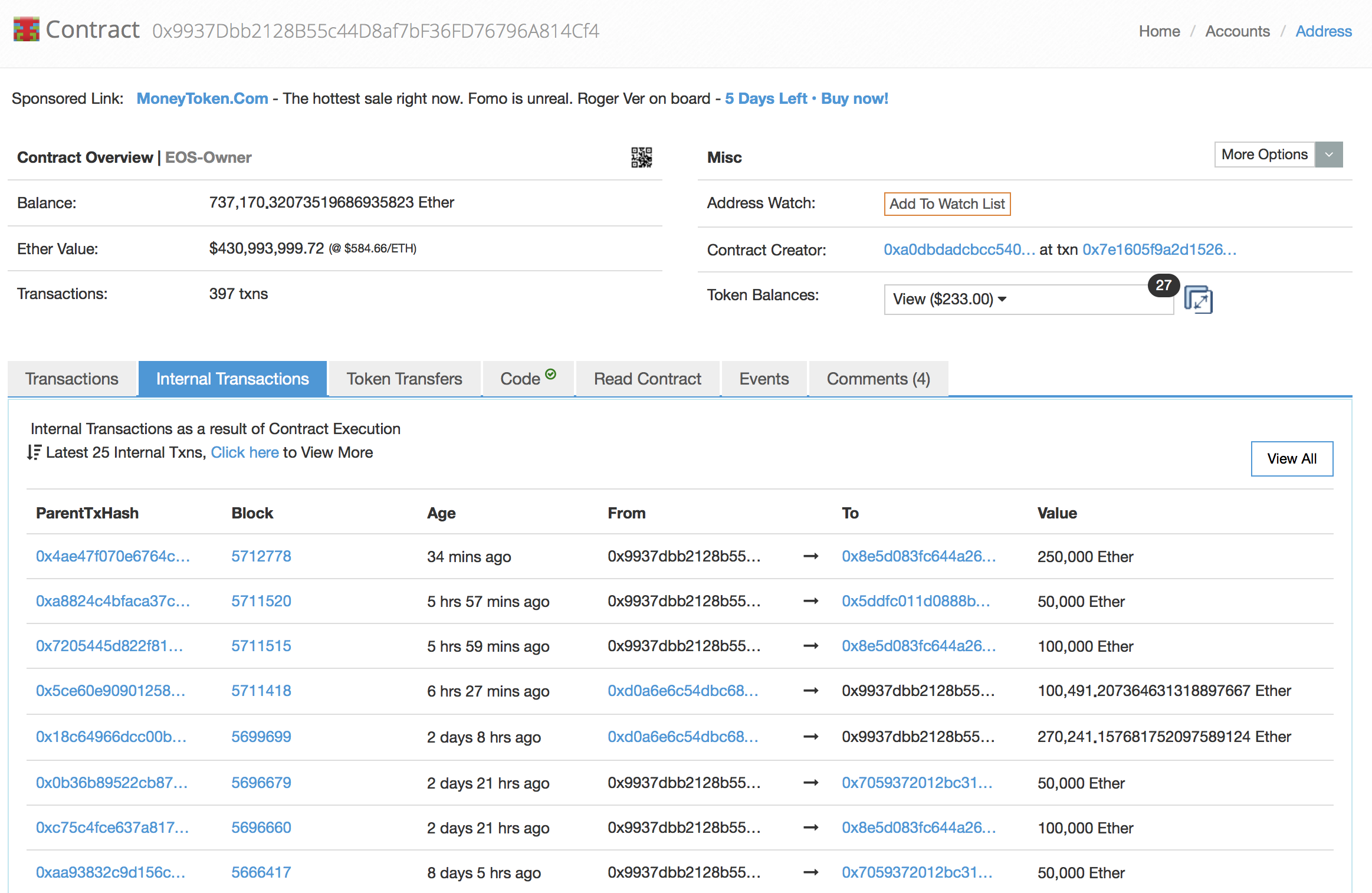 We’re interested in the very last action which says it occured 34 minutes ago. That is the address that starts with 8e5d. So let’s go there: 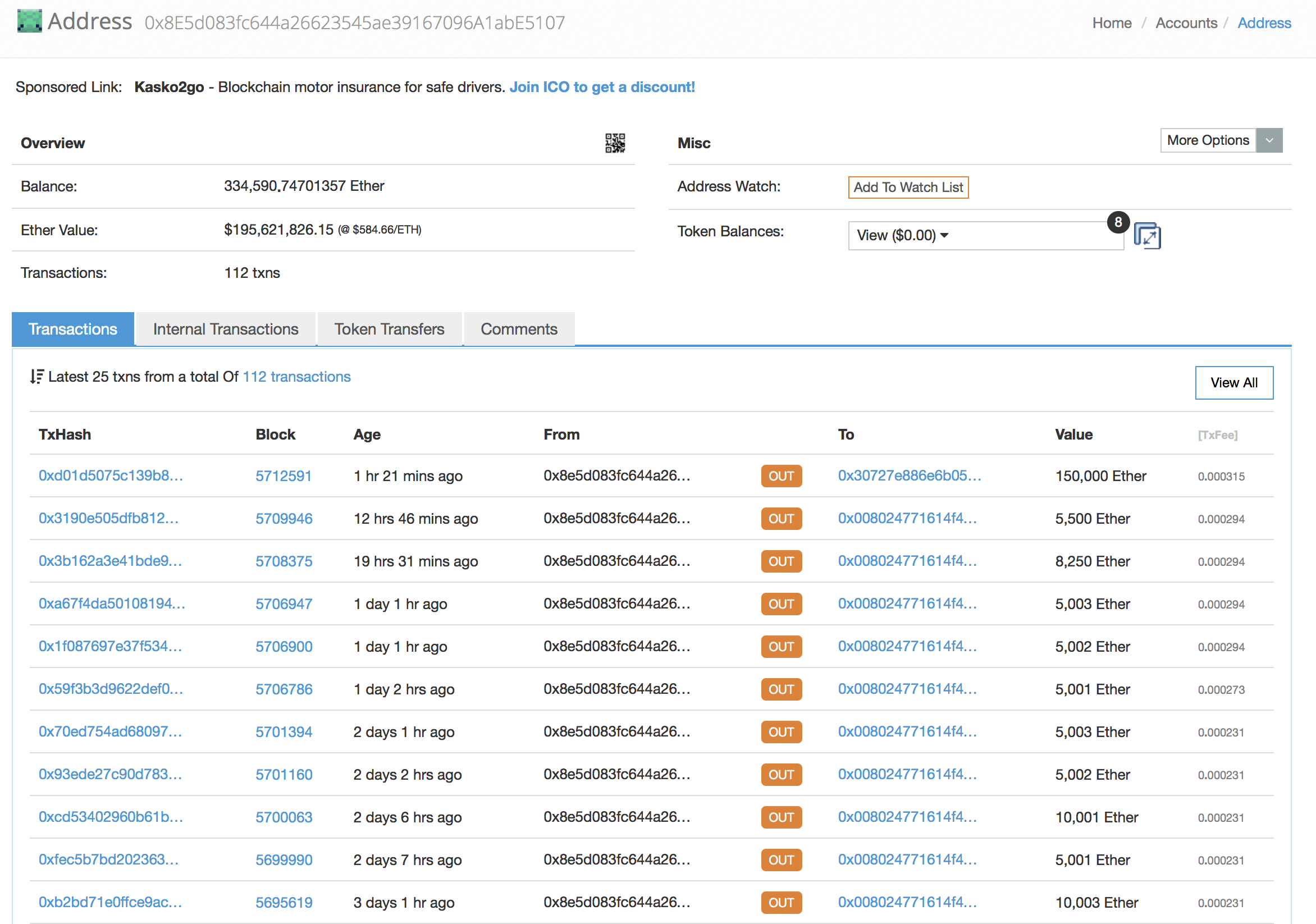 Here we are interested about the first transaction again, the one that says 1 hr 21 mins. That is, about an hour and a half prior to the time that screenshot was taken earlier today, this intermediary address sent 150,000 eth to the address that starts with 3072. So let’s go there: 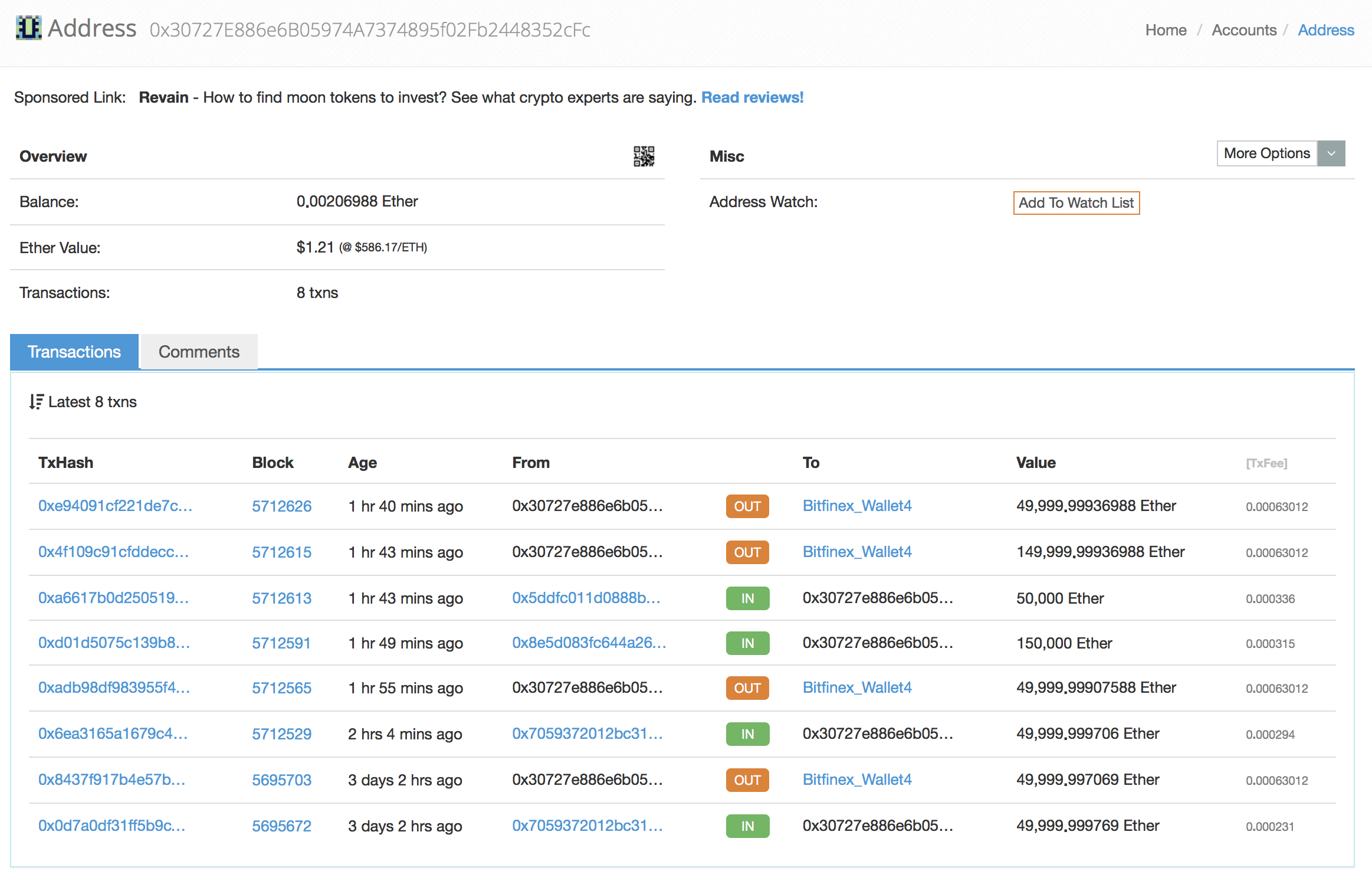 This, again, is an intermediary address and has a lot less transactions than the previous one. It has received 300,000 eth. The 7059 address is a more direct intermediary to the EOS owner address.

All of it, thus, comes virtually directly from EOS. All of it has gone pretty much directly to Bitfinex. Some 200,000 of it was sent just now as they prepare for the launch.

Bitfinex has an Over the Counter (OTC) facility as far as we are aware. That is sort of a peer to peer method of selling/buying huge amounts, rather than putting it on an exchange.

However, now that we have concrete evidence EOS is sending their funds to Bitfinex, we can explain more conclusively the events of May 28th.

As you may remember around 200,000 eth exchanged hands on Bitfinex’s exchange on that day, with much of it being selling. On the balance of probabilities we would say EOS market sold a lot of eth on that day.

That balance of probabilities weighs at a fairly close level to beyond reasonable doubt because there was no other event to trigger that selling within that hour period at that scale. That is, there most probably was no insider information as by now the news would have come out.

Why they would market sell such huge sums is a very good question. EOS is trying to market itself as an ethereum competitor, promising a somewhat identical, but trusted, platform.

Trusted because if EOS did truly become the platform of choice, all human history recorded on the blockchain would depend for its veracity on the decision of 21 nodes.

That means your home ownership, if it is on EOS’s blockchain, may well change, if those 21 nodes collude and decide to do so.

What’s more, if EOS is truly used, it may well be no one, except for those 21, can know whether in fact it was changed unless they spend millions to run a node that can see what’s happening on that blockchain.

That’s why ethereum places great importance on your ability to run a node with as little resources as possible, albeit not 0, but $1,000-$5,000 or maybe $10,000 a year in the long run, so that you yourself can be sure of history if you want to.

That’s because decentralization is not a luxury in public blockchains, but a necessity, and not just on ideological grounds, but financial grounds. Just as an example, if the 21 block producers can say that your $1 million house is not yours, then they will probably say it, at least for some.

While if you have 10,000 nodes, there is no way to get them to say such a thing, unless it is an absolutely extraordinary event.

Regardless of whether EOS does or does not have merit as an ethereum competitor, they do market themselves as such.

They may have therefore market sold to shake confidence in ethereum’s price, but that backfired as all cryptos went down, including EOS, which the very next day had an “epic vulnerability” revealed.

It may well be therefore they will now refrain from market selling, but just what exactly they will do remains to be seen as EOS now finally nears its culmination.

Bitcoin 20% Off This Black Friday

Leave a Reply to Me Me Cancel Reply