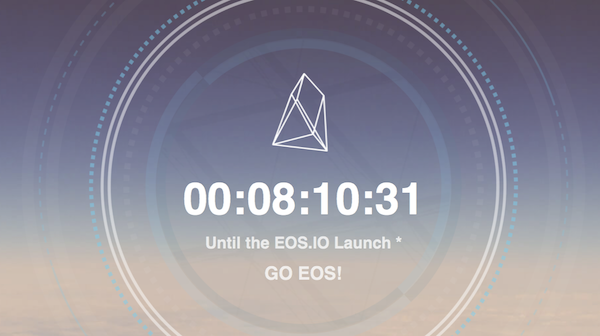 EOS is up nearly 17% today, bringing up the rest of the crypto-market with it, as the year long ICO has now finally ended with the mainnet launch imminent.

Block.one, which describes itself as “publisher of the ground-breaking EOSIO blockchain protocol,” has just launched v.1 of EOS.

All ethereum based EOS tokens are now to be frozen in about eight hours (11PM GMT), with about 96% of the claims, at the time of writing, to become EOS coins.

What exactly happens at that point remains to be seen. Block.one has tried to create a decentralized launch process, so after snapshots are taken anyone can launch a blockchain. That’s the theory, in practice:

“On May 25th, 2018 the EOS Mainnet Launch Group (EMLG) united under the promise of delivering one mainnet which will be called EOS,” EOS New York says before further describing the launch process:

Who exactly appoints these block producers and why anyone should think their chain is the chain, is unclear at this stage. So there may well be some confusion and there may well be different fork chains from the beginning.

It’s unclear, however, whether this specific team has any advantages by perhaps having access to the code before hand, so allowing them to have the chain ready to go. There may well, therefore, be just one chain from the beginning.

The “launch” will start with a 48 hour testing period which may be extended if there are any bugs or the testing doesn’t go very well. Then there will be a voting period when at least 15% of the tokens have to vote for at least one delegated staker called a Block Producer.

Most of the voting will probably be manually through a centralized website which is already up and running and already has a chain showing.

How exactly they are replaced is unclear. If it is manually, then who does the replacement and how/why can he/they be trusted. If it is automatically, then there may be a lot of game theoretical flaws.

EOS doesn’t use any punishment as far as we are aware, with the only safeguard being that they are voted out. Again that could leave a lot of potential attack vectors.

The final code has just been released, so we’ll have to wait and see what the potential detailed analysis of it have to say in due course. For now, the focus is on seeing this all run, which may take a few days.

If all goes well, Block.one has pledged $1 billion in investment for EOS focused start-ups with some $700 million of it already delegated through partnerships.

It is very much a significant amount of funds to bootstrap a new chain, but by comparison ethereum based projects raised some $6 billion in ICOs last year and may have raised as much as $7 billion so far this year.

EOS, therefore, will have a long way to go to build an ecosystem, and will have significant competition where developers are concerned, especially if the coders are more focused on the medium and long-term.

On that time horizon, solid foundations matter. Trusting 21, potentially anonymous, Block Producers to not collude and blacklist your smart contract, for example, isn’t quite a blockchain. One can say they can be voted out, but we’ll have to wait and see whether that is the case in practice.

There are many other aspects that leave plenty of questions, but one of the main ones is the effect of supply and demand on a set-up like EOS, which really looks like more of a new BitShares chain where the fundamental design is concerned.

The set-up pretty much ensures that there will be a period of low supply as the coins are locked into voting/staking for three days, and then that supply floods the market when that period ends. So if demand remains constant, price would rise and then price would crash.

Bitcoin and ethereum do too have that aspect to some extend as miners can exert pressure on the price, but ethereum will soon significantly reduce miners’ reward and overall inflation by some 80%.

In ethereum, moreover, new rewards will be opened to all through staking in Hybrid Casper, albeit they may initially need to use a pool, but all they’d need is some eth and eventually they won’t need a pool at all if they have 32 eth.

In EOS, only these 21 insiders, which seemingly have already colluded to have only one “true” chain at launch, will get all the reward, forever onwards.

And although that forever might need to be qualified as they could potentially reduce it, which Block Producer would willingly do so?

They can be voted out, but unless there is something big, who will bother to vote? What’s the incentive for voting? Why should anyone vote at all or care?

That voting aspect is a problem Dan Larimer said he found with BitShares, but there appears to be no innovation or improvement on that at all. In fact, except that this has effectively copied smart contracts from ethereum, and maybe some differences here and there, it isn’t very clear how EOS is any different, fundamentally, from Bitshares, which also claims to handle thousands of transactions and uses Delegated Proof of Stake (DPoS) yet Larimer for some reason left it rather than improving it.

Like other projects that use DPoS, investors and users eventually realize that they’re playing game of chairs because the locked supply will eventually flood the market. So you get about five minutes of attention and then a slow descent into irrelevance.

The already considerable volatility in public blockchains, which ethereum goes some ways to address with Hybrid Casper, is therefore compounded in DPoS, making it a far riskier asset from a financial perspective.

After now five years of working with DPoS and seeing it in action, you’d think Dan Larimer would have some solution to it, or some solution to the lack of voting participation, or some solution to many other aspects, but instead what he has seemingly provided is the same old thing, with a new name, which raises the question as to why it wouldn’t go the same way as the other old things he has produced and has left.