Reading ethereum traders one can feel a sense of despondency, a far too nice word to indicate low spirits from loss of hope or courage.

They are effectively crying. So many months without a proper bull run, they seem to be saying. With their feels now confirmed by the re-appearance of Easy Peasy.

But it does feel like price is in a certain stage where all that deafening partying in December 2017 has now given way to a bit more soberness.

Although there are some who are claiming $20 trillion imminent, some others are starting to wonder whether there will be any bull in sight this year at all.

That, we do not know, but what we do probably know is that we have entered the Despondency or Depression stage.

December was euphoria, of course, and that was anxiety too. Shortly after was denial, mixed with fear. What desperation is doing there we do not know, but panic followed, and capitulation was in March, early April.

Now, it does feel like we’re at despondency, and may be entering depression where people stop talking about bubbles and all that nonsense and some sort of realism sets in.

During this stage, many may be tempted to look at the negative aspects, summarized by us as “it’s all rubbish.” It is here where one falls into the Easy Peasy trap, but ethereum has so far very much proved the history rhymes saying.

That’s not really much different than ethereum’s rise to $20 in 2016, and then the devastating hack of the Slock.it DAO.

Both then “crashed” and they all started crying, going through all those stages and giving birth to Easy Peasy, the legend, but bitcoin then recovered and went to a new high of around $1,200 in November 2013.

Here is where we zoom in, although we haven’t done a great job of it because Bitfinex data only goes up to where it starts below for bitcoin. 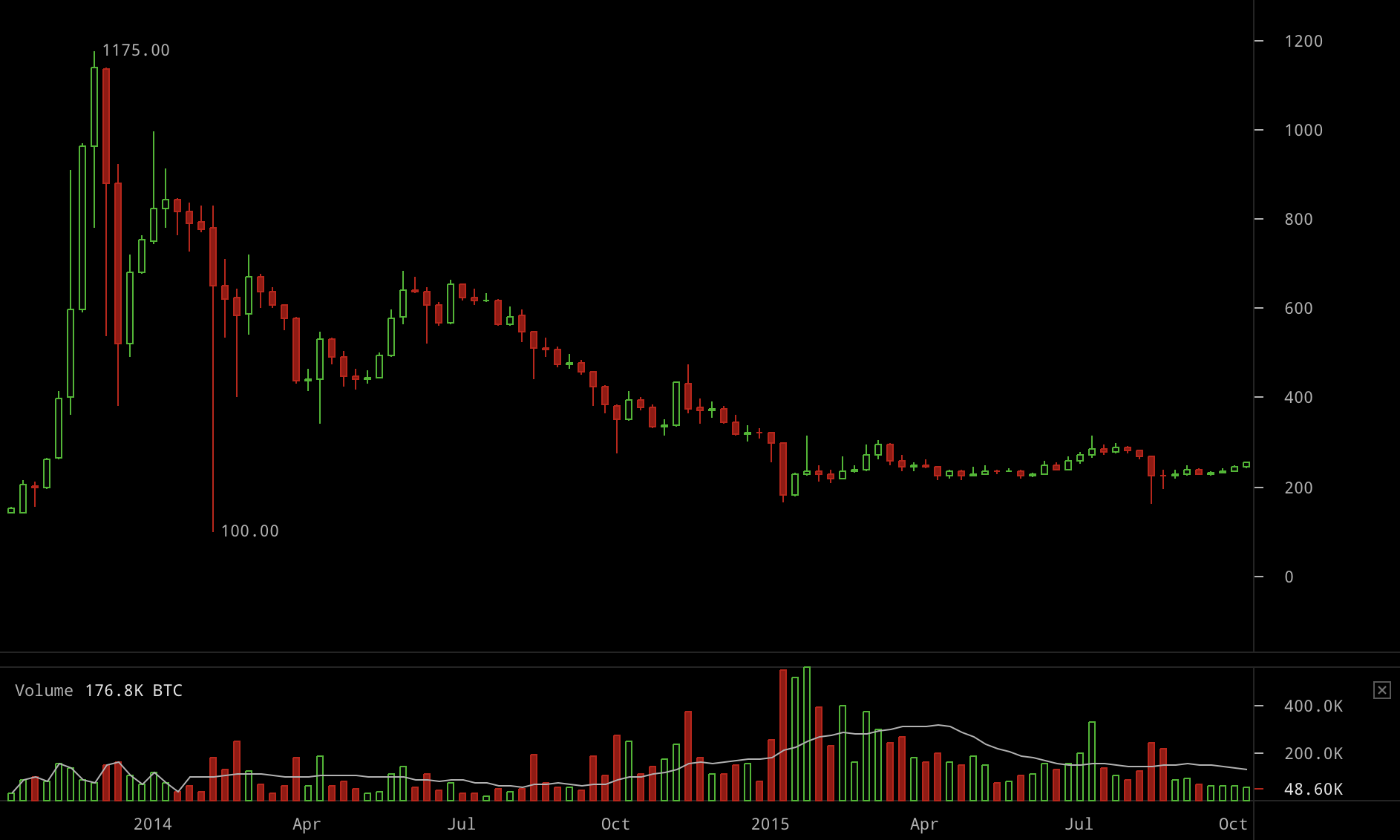 As you can see here, anxiety sets in and interestingly this is before MT Gox goes bankrupt. It looks like it was around December when they all think this rose too high, too fast, and they all start selling.

It crashes, in about two weeks, to around $350, then quickly recovers because they’re all in denial. Fear then kicks in, and some panic, with Bitfinex adding to the show by a glitch sending it down to $100.

$135 the true price, they used to joke. That’s where bitcoin’s price settled on bankrupt MT Gox before it was taken off-line.

That exchange was obviously running on fractional reserve. That panic above in price would have led to a lot more demand on their reserves, which they could not meet so they closed shop. 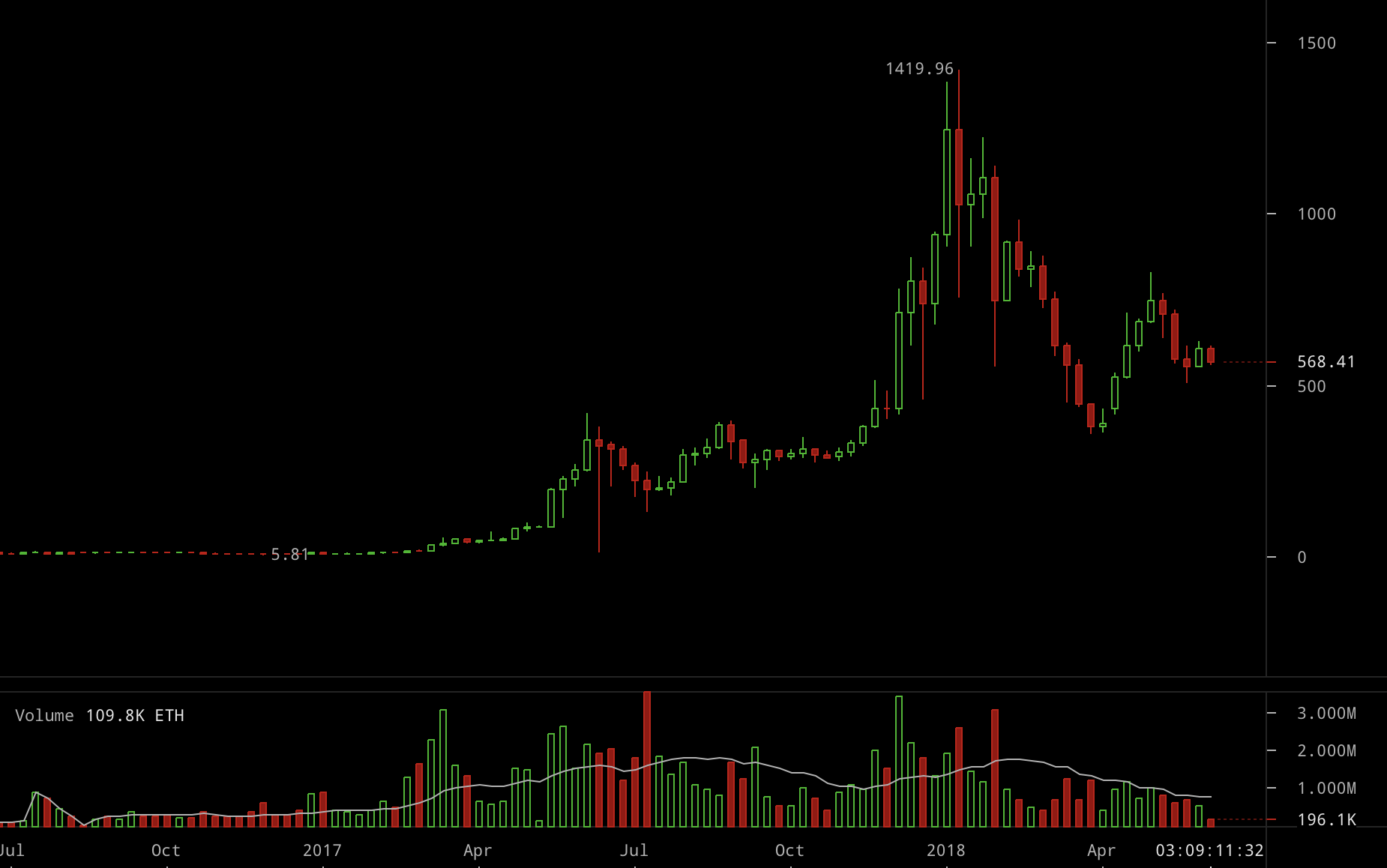 If we had hired that 4chan guy, we would have placed the two charts on top of each other under: spot the difference.

But since we’re low budget and can’t afford such leet haxor, we’ll have to describe with words that bitcoin’s chart would have looked the same to ethereum’s above chart prior to the big jump in December.

After that, there are some differences. Ethereum of course has the anxiety, then a bounce cus denial, then fear kicks in, some panic, and capitulation, but bitcoin went more slowly down to capitulation because a lot of big merchants started announcing they accept it for payment when it was at $600.

So that kept it a float a bit more, perhaps artificially, with it then racing down to settle at around $200. Ethereum does it a lot quicker in the five weeks of selling, with it then hanging around $500-$600 for one of the longest period of sideways. 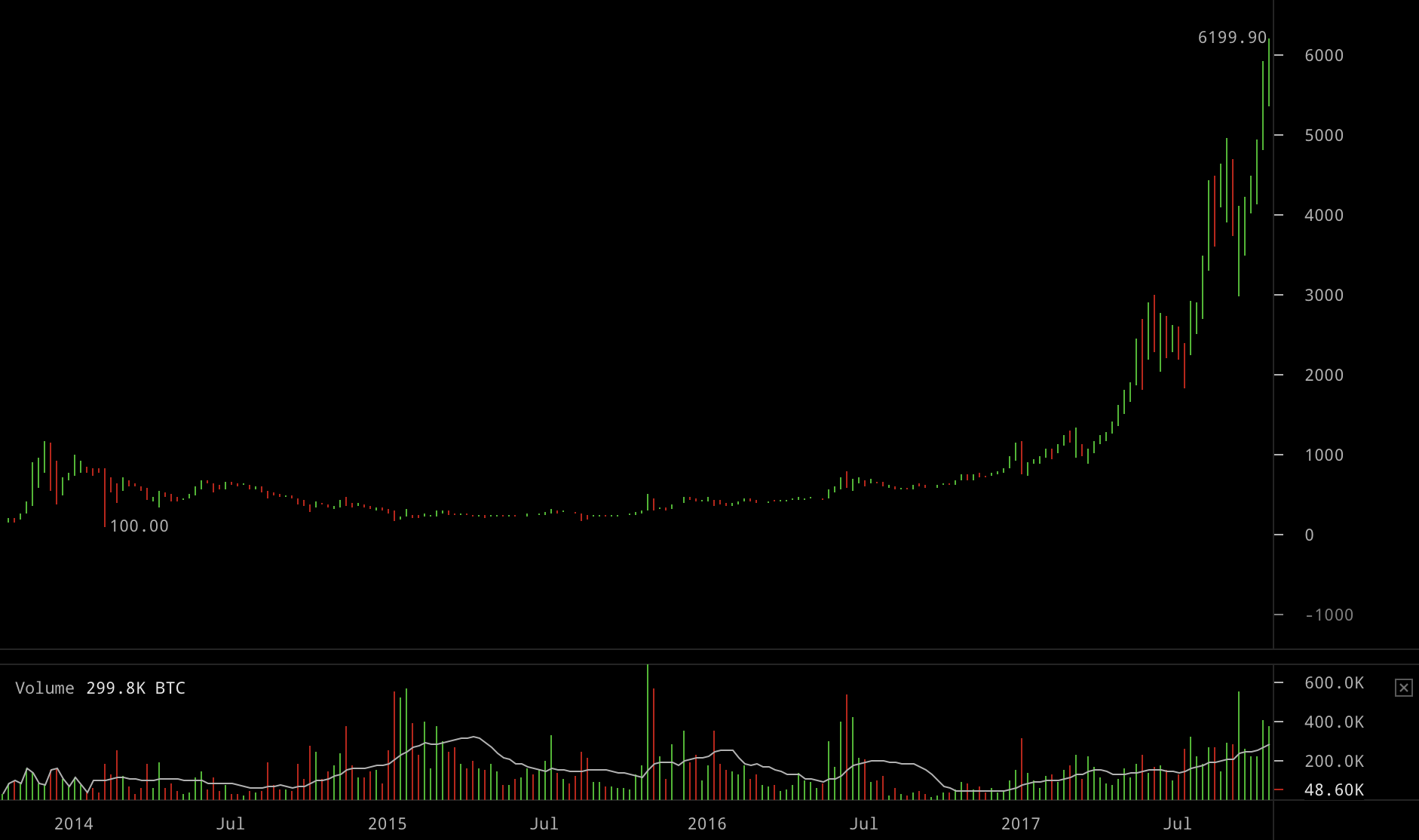 Ethereans cry about a sideway that’s lasted just three weeks, telling us all how bored they are or that the paint is not yet dry.

Then, when price moves a little bit, they go to all sites finding whatever wei they have left to sell it all and claim doom on this land.

Bitcoiners, on the other hand, had months and months of price not moving one bit, which is why they came up with a stupid debate over an irrelevant matter that all knew how to solve but their positions had hardened so much none of em cared about solving anything.

While that distracted some, price started kind of slowly moving up, very, very slowly, and then very fast to $20,000.

With ethereum acting pretty much as bitcoin so far, it is tempting to say it will do the same. But since we can’t see the future, we can’t say so.

One way to explain this pattern, however, might be awareness. The two have followed the same trajectory so far because the way awareness spreads, you’d think, would be the same for both.

Ethereum, of course, had the benefit of being not quite as new as bitcoin, but that benefit, in our view, is very, very, limited.

We say that from experience because prior to looking into ethereum we just thought it is effectively a bitcoin clone with claims of doing this or that, but meh. This is probably where most are at, if they’ve heard of eth at all.

Ethereum, however, has a far bigger supply than bitcoin, some 5x. Yet it has jumped higher than bitcoin each time so far at a comparative stage.

So can this really then go to more than $20,000 per coin? Who knows. The dotcom bubble in 1999 burst at a market cap of around $6 trillion. That’s 20 years of inflation, so if we use a rough proxy of houses back then being 10x less, in current money that’s $60 trillion.

Ethereum at $20,000 would be about $2 trillion, so there isn’t any law of money supply that says it can’t reach such price, but whether it will remains to be seen.