The United States of Soviet 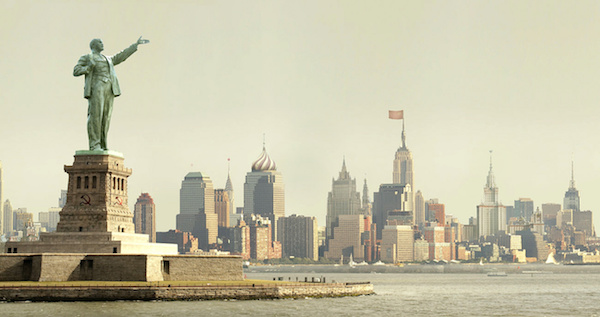 The United States of America, once a bastion of liberty where voluntary contractual agreements reigned supreme, has now descended into what appears to be a command economy with the state, once looked suspiciously by all, meddling itself into all things.

“Google Is Helping the Pentagon Build AI for Drones” shouts a recent headline in the latest example of what looks like a complete merger between the state and publicly traded companies.

The prime example is, of course, the banking blockade on Wikileaks. Before that we had the mass media act as a propaganda arm for the war mongers to subdue a free people that were very much against what they knew was wrong and were vindicated as now even the war mongers admit it was a disaster.

In this space too we have seen just how that public and private distinction has vanished in some ways. Soon after CFTC fined Bitfinex, Bitfinex saw a banking blockade.

That’s not to pass judgment on whether the fine etc was right or wrong, or the banking blockade, but to argue that America has descended into a command economy that in many ways can look quite indistinguishable from communism.

You may ridicule that statement reflexively. Farms are not under state control, you can say. Private ownership is still a thing. But that’s to take communism to its extreme stage just before it collapsed, and that’s to reduce capitalism to the point of it being nonsensical.

Because regulations now permeate so much of our lives that you can not possibly be doing anything which is not illegal in some way. Kids need a license to sell lemonade, for example.

That regulatory environment gives us a situation where there are few big monopolies, duopolies or oligopolies that do behave as if the law does not apply to them, with the state now effectively acknowledging it where the banking sector is concerned.

These monopolies are protected from new entrants through regulatory barriers to entry to the point even this very new space has a monopoly of sorts, Coinbase.

No one can possibly think to compete with Coinbase while applying for licenses in 52 states as well as all other licenses with CFTC, SEC, or whatever acronym.

Here thus we have the command economy. If policy makers wanted Coinbase to do something while the public is unaware of it, do you think they could just knock on Coinbase’s door and have a “friendly” chat? Something similar to what they did with Facebook and Google regarding crypto ads.

Since all these bureaucrats are people, and sometimes go to the parties where all these monopoly CEOs hang out, and have all sorts of non public discussions with wink winks, and might even see each other as friends, the distinction between public and private here becomes very blurred indeed.

We thus get a “Washington consensus.” An out of touch bubble where they talk down to us all as they party on our money and then think it fit to tell us what to do with our money.

They find it fit to tell us where to invest it by providing only one option, monopoly stocks, and then at the same time exclude themselves from that same rule by in effect having no restriction whatever for their own “kind” as to where they can invest their money.

So making rules for the rest to obey, while for themselves even when they are caught they have royal courts, like Lagarde in France.

Left on its own this tendency of bureaucrats to regulate and micro-manage every little thing might eventually engulf the entire economy and might even lead to a repeat of the disastrous full communism where even farms are effectively commanded by the state in all but name.

For the right to property isn’t some abstract thing. In practice it means the freedom to do with such property whatever one pleases as long as it does not harm someone else. But if such freedom is qualified by… sure but if you do this, if you jump there, if you dance on a pin, while whoever is asking you to do all that doesn’t himself have to do so, then it isn’t really ownership.

If you can’t give your own money to some bright honest kids then you have partial property rights. If the only real way you can see your money appreciate is through stocks, then that partial becomes a quarter. If then you realize that limitation directly causes monopolies which abuse you in all ways they find fit, then we’re getting pretty close to no property rights at all.

Marx’s main and most persuasive critique was in his analysis of how added value comes from labour which is not fully compensated for that added value. It is not compensated because one does not really have the freedom to walk away and provide his service directly.

They do not have such freedom because there are countless of regulatory barriers. Starting with initial capital, which is limited to very high interest rates from banks (even then if you are lucky) unless you or your family is rich already, or from rich Venture Capitalists who will ask in effect for all your blood and sweat in return.

Such limitation goes a great way towards funneling you into cubicles, with the state adding for some good measure regulatory barriers upon barriers. Leaving in the end just a few global corporations that probably have a direct phone line to the regulators, law enforcers, and so act like kings.

An exaggeration, still, to call it a command economy you might say, but the distinction is becoming less and less by the day.

Because now even public commons are first to go through a handful of rich, who so are set to take ownership of public open global networks by the heavy handed force of the SEC and century old barbaric laws which tell us we can have the crumbs once they’ve eaten the cake.

“Economic elites… will not be idle… If the kleptocracy controls technology and the means of distribution, then they simply accumulate more wealth at the expense of their citizens.” CFTC Commissioner.