Ethereum is up 10% from around $500 yesterday to a high for the day of $548 before seemingly settling at around $535 at the time of writing.

Its trading volumes are up somewhat to $1.8 billion, while transactions now stand at 700,000 for the past 24 hours, with the currency seeing a recovery of sorts. 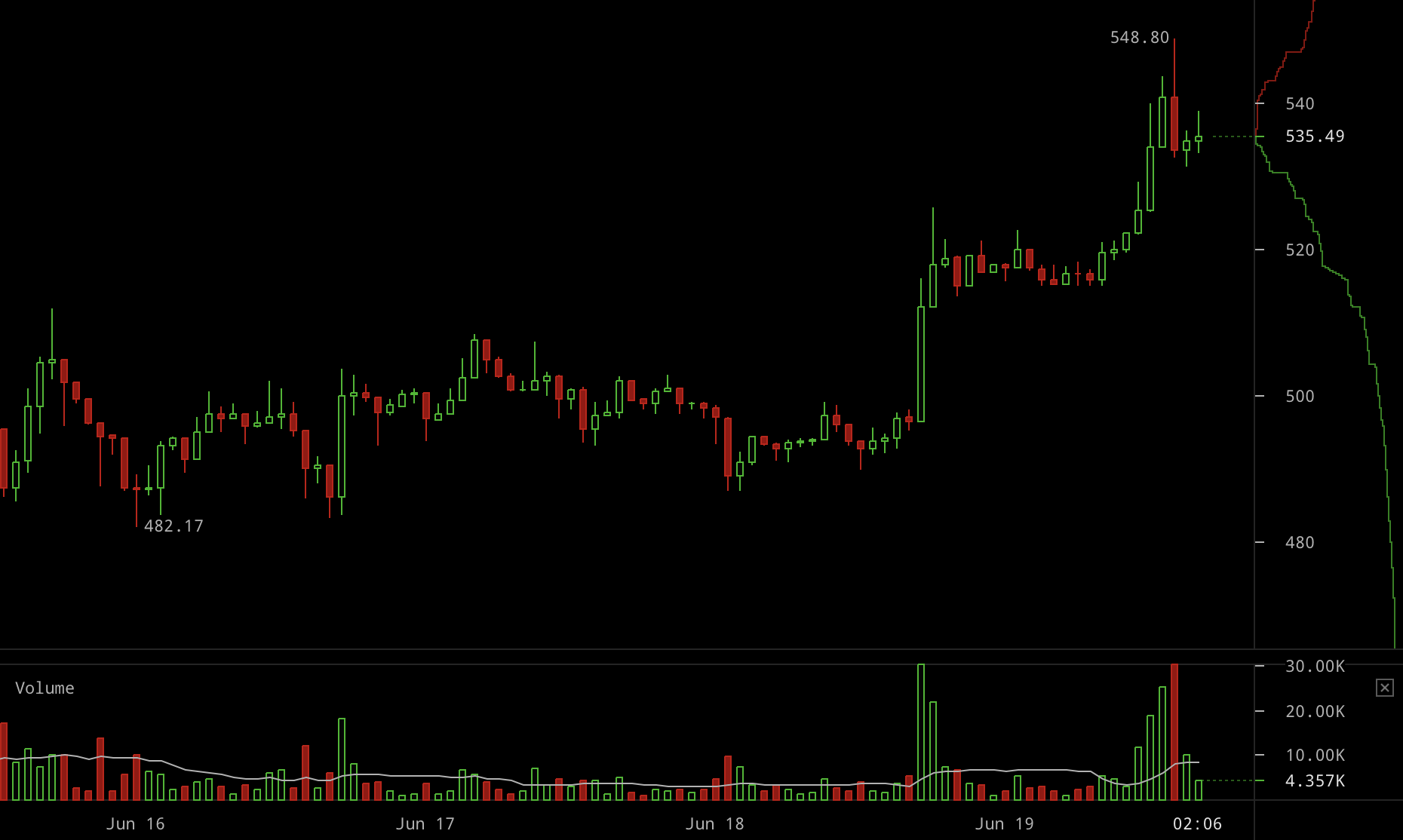 Ethereum has been leading the rest, rising more than any of the top cryptos, while more widely Tron is a big winner today, rising 15%.

They are awaiting the launch of their EOS like dPoS blockchain which is meant to occur around 26th of June, dubbed as independence day for Tron.

That makes the top ten space a bit crowded in a way as Tezos is meant to launch soon too, with Cardano also eventually managing to launch, increasing the horizon considerably.

But what made ethereum start rising yesterday? Well, one reason might be that it wasn’t falling anymore. As can be seen up there, it was a straight line just under $500 for a few days.

A more substantial reason might perhaps be the lifting of uncertainty in regards to regulations. That kind of manifested itself instantly when SEC clarified their stance, but it looks like the market needed some time to digest it.

ICOs now at least know where they stand. In Europe they get an exemption if arranged in a crowdfunding method and raise less than $10 million. In America they can change from securities to commodities or something else once the network is up and running in a decentralized way.

That probably means ICOs are here to stay, with the token economy continuing to expand as new projects try innovative ideas.

Trade war with China might be another reason for the increased demand. America has been in a trade war for years and they’ve been wining, Trump said. No tariffs, no subsidies, that’s what they teach you at Wharton, he also said.

Dow is down 1.20% at the time of writing, Apple down 2%. Cryptos may have perhaps gained some momentum from a little flight to safety, but they started rising yesterday before all this megaphone diplomacy.

So the rise might have just been due to speculation that since trading volumes and other stats reached new lows yesterday, they might not have much more to go down, making an upwards bet have a bigger chance.

With the situation in ethereum in particular slightly conflicted because it is unlikely to see any major upgrades this year and yet when it does they might be quite major indeed.

In addition, Plasma might come out and now the road for fake futures is probably clear. Apparently that allows Wall Street to manipulate crypto prices by going half-short and half-long.

They’ll however need eth first to do the latter part, so maybe they’ve started trying to front-run each other while putting out idiotic reports that say cryptos will break the internet.

Or perhaps it was because Square was given a Bitlicense. That thing still stands apparently, while in UK they’re investing some more money on FinTech.

“The UK is a world leader in the FinTech sector, thanks to our highly-skilled and creative workforce, fair regulatory system and ease of doing business,” Liam Fox, International Trade Secretary, said.

£2.3 billion of private investment will apparently go towards FinTech this year, with the term standing for Financial Technology coined by the David Cameron administration in 2014 in designating a new category that has blockchain as a poster boy but is broader in including any internet or tech related financial offerings.

Cameron’s leave after Brexit may have slowed down somewhat that significant momentum London had, with a London mirror of sorts, Japan, perhaps taking some of it. Local media reports:

“In an effort to step up consumer protections and improve transparency, Japan’s cryptocurrency industry has drafted new regulations that prohibit insider trading and the trading of new currencies that cannot be traced easily.

The Japan Virtual Currency Exchange Association, created in March, will vote on the proposal at a meeting on June 27. It seeks to adopt the rules as soon as it is recognized as a self-regulatory body by the Financial Services Agency, a financial watchdog.”

If they are recognized as a self-regulatory body, it would be the very first in the world and it would be quite a visible sign of market maturation.

But all that seriousness might be far too much for sillynodes, so maybe it was this very professional ad from Golem that done it, or perhaps it was Matt Farley who made the price rise.

The dad has created a Farley Coin for his kids to “earn points for brushing your teeth, finishing your chores, and doing your schoolwork. Those points could then be spent on lucrative rewards such as 30 minutes of screen time or $1 worth of fiat currency,” according to a report.

All, of course, on the blockchain, breaking the internet little by little, first with cats and now with silly kids tormenting the old bankers.

That too is a sign of sorts. The tech is being used. It hasn’t conquered Mars yet, but billions are moving every day in a trustless way. A company here, a start-up there, a node somewhere else, and little by little, so very unnoticeably, we gradually transition to a very new world.