EOS’s interim arbitrator ordered the freezing of 27 new accounts on June the 22nd without initially providing any reason.

Later the arbitrator said the accounts were frozen due to formal claims which prove ownership and allege hacking, phishing or scamming.

One claimant says he is “one of the hacked accounts (gq4demryhage) containing over 13,000 eos. The hacker moved it twice – first to q4dfv32fxfkx and then to ktl2qk5h4bor. In complaining to ECAF, the three accounts were frozen over just one incident.”

He proved ownership of the eth address which is linked to the eos tokens. He further provided identification to the arbitrator in the form of a driving license.

He also says “I really do not know at what point I was hacked.” Someone, however, has apparently gone through all these addresses to find that one account is responsible for all the claims, with that account then moving the funds twice.

The authenticity of the arbitrator’s order was established manually. The means of communication appears to be the posting of this order in some telegram groups for verification, then entities share it more widely. 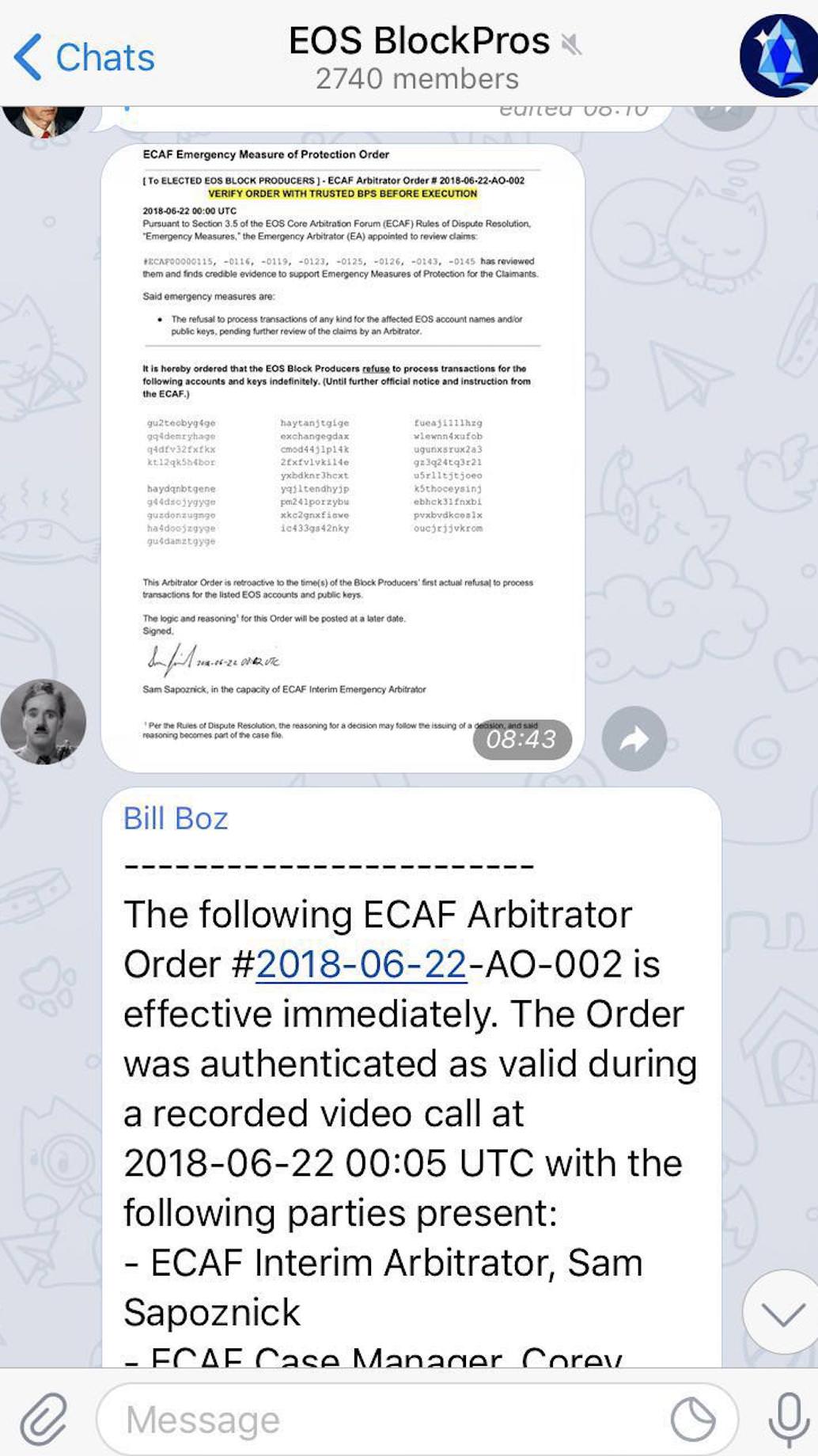 That recorded video hasn’t easily come across our attention, so we assume it hasn’t been published. We have further asked to be invited as a non-participating observer to the BP’s private chatrooms or such video calls, but without much success.

The reception of the order by eos holders has largely been that of ridiculing, anger, or criticism. One of them says:

“Can I just laugh out sarcastically at this ballpoint signed and timestamped piece of pdf-****? If only there were some way to digitally sign and timestamp some piece of important information…”

They can always ask Europol for assistance if they need it as they showed recently how they can utilize bitcoin’s blockchain to validate conference speakers.

In eos we would think it would be far easier because of its smart contracts, but the point the eos holder is making is not regarding form, but substance, by somewhat succinctly suggesting this is a throwback to pen and paper in the digital age.

“Honestly I find it a bit unsettling that I have to constantly keep an eye out for the names in case my account has been targeted for no reason,” says another eoser.

Some are wondering who all these ECAF people are, how they are appointed, why one needs to be known to the arbitrator to be eligible, what’s their basis for these decisions in the constitution and whether they can just remove them.

We, however, are wondering whether the arbitrator is liable in a court of law for theft. The funds have moved, and not once, but twice. Even assuming the first account was the thief, on what basis can anyone say that the second account or the third account is still that of the thief?

He might have sent it to an exchange, so now that exchange might be out of pocket. Maybe he bought something with it from the few places that accept eos.

Imagine there are many dapps running on eos as they claimed there would be, and this thief bought a cryptokittie with it. Well, the kitties are now starving.

Making it all worse than the current system where innocent third parties keep the funds if they were not aware it was theft proceeds. Cash is cash.

Imagine if, everywhere we go, we are asked to prove where our money came from and that it is not theft money. It is not ordinary people’s jobs to be the police unless they have some good reason to suspect the money is no good.

What is even worse is that the innocent victim has no way of being notified. Eos accounts are just random letters. They do not contain names or addresses which would have allowed a claimant or the arbitrator to notify the account of the proposed seizure of assets.

So then they’ll have to keep an eye on what orders come from these telegram chats, but what if the person is from South Korea and doesn’t read english? How long would it take for this information to make its way to all sorts of countries and be translated into all sorts of languages?

We know, because we’re in the business of information, and we’d say a week to a month for the major crypto centers, for countries somewhat outside of the crypto radar, it may be even longer.

Now imagine this innocent party desperately needs the money that has just been frozen. How long until they win the “case?” Who covers all the costs of arbitration, plus damages? How do you enforce such costs order when one is in America the other say in China? What court would recognize the legitimacy of this arbitrator to allow you to enforce the order?

“The only constitution in this country is that of the United States of America, sir, now sit down,” our imaginary judge may well say.

So the arbitrator has the identity of these claimants. And? On what basis does the arbitrator sue for a fraudulent claim? If they are, say, in South Korea, will the probably English/American arbitrator even bother to sue? Do they pass the matter to the police? And what if the police says nothing to do with us this is a civil matter go get a lawyer?

If eos wants to play judges then at least do it properly. The current interim arbitrator, for example, doesn’t sound to us like a lawyer in any way. The arbitrator he replaced may well have been for he gave a very good reason as to why the eos constitution would not apply in these cases.

That wasn’t just a loophole. That was following due process, something extremely important when you are dealing with $1 million worth of eos which has allegedly been stolen.

Wearing the judge’s pen isn’t a task to be taken lightly for there are people that are affected at the end of it and they may be the claimant or the defendant.

To hold that pen people spend years of study and then decades in practice gaining all the experience and even then judges get it wrong so making necessary the appeal procedure that goes all the way up to the Supreme Court after years of litigation.

If instead we could just get a random person who is not even a lawyer to decide all these matters as he randomly sees fit, then we would probably be saving a lot of money and time, but at the cost of lives potentially ruined.

Making this eos matter now no longer a clownshow, but a very sad affair, for while previously we might have enjoyed the popcorn which is freely given with any blockchain, now we just feel appalled.