“As a block producer, we pay highly and close attention to it and feel regretful for the loss of EOS in these accounts.”

So says EosStore, an eos Block Producer (BP) which seems to run a one man show. Apparently they could not keep up with all these blacklisting orders by Sam Sapoznick (pictured), the interim arbitrator. They saw the first one, but not the second one. They say:

“The Community has provided two blacklists, while the second blacklist was not discussed in the community Zoom meeting, and non of a formal announcement of it could be found.

The communication system of ECAF is not perfect for ECAF itself is at preliminary stage. The information of these frozen accounts did not appear in following channels: a. three Telegram channels: EOSIO Gov, EOS Validation(EMLG) and EOS BP Infrastructure.; b. github as the first blacklist did; c. Zoom video meeting on June 21st.

Only in key base and EOS 911 could you find this information. Plus current massive fake news, like a fake ECAF arbitration order these days, we did not updated the blacklist in time.”

On Telegram, however, they said they were away for about two days on private matters so had not seen the order: 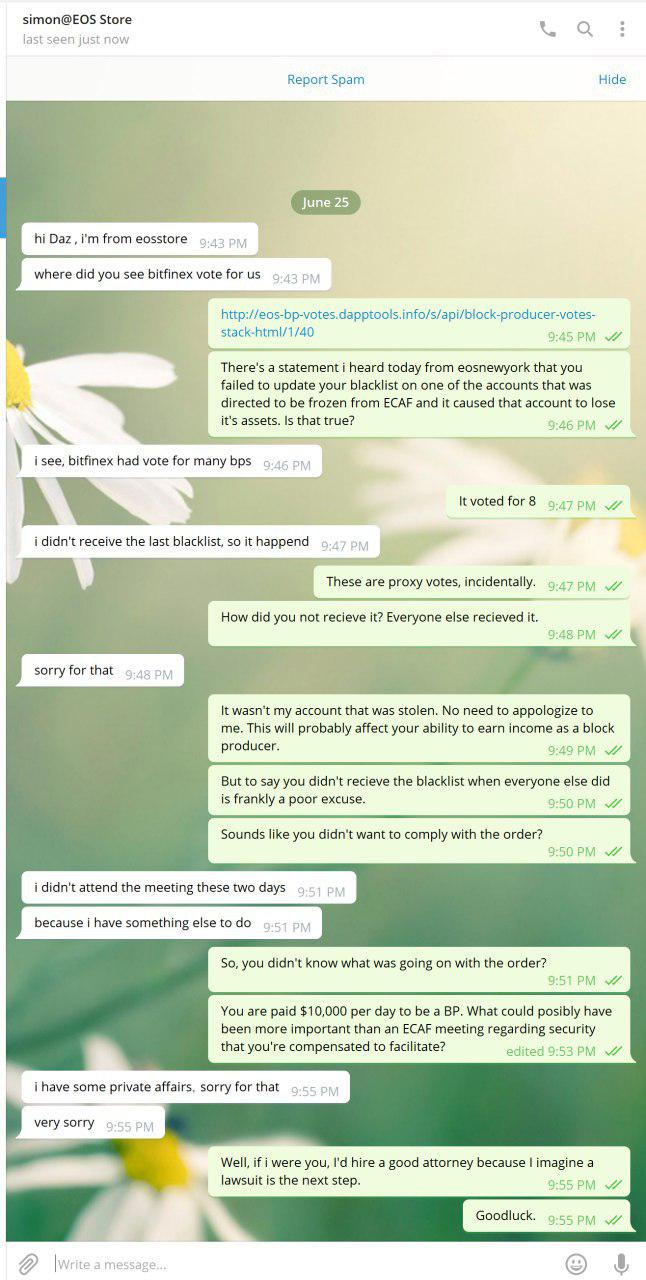 As a result of this individual being away for two days, one eos account was not frozen, with 3,570 eos, worth around $35,000, transferred to an exchange by an alleged hacker thief.

The BP suggested they might compensate the claimant if a consensus is reached that the BP was wrong to not freeze the account, while some eosers are calling for them to be voted out.

That, however, would not be an easy affair because if Bitfinex did vote for them as suggested above, it may take quite a bit of a revolt for others to overpower their vote count.

Most, however, are probably unable to even keep up with what exactly is going on with the arbitration process being quite intransparent and very much open to abuse:

The above is a fake arbitration order, yet it looks very much similar to a legitimate one. So the only way we learned it is fake is by a block producer commenting online to say so.

Those 4chan kids, therefore, who clearly have too much time on their hand and far too good photoshop skills, might need to get one known BP to say the order is legitimate, and we wouldn’t know any better.

Because while we are trying to update the arcane paper based legal system with sweet smart contracts, eos is trying to replace it with paper based dictats.

That apparently has problems, such as people did not receive the paper, lost in the mail somewhere perhaps. Who would have ever guessed.

It appears to have trust problems too. While we are called trust nodes, eos BPs might well be called  ‘trust us,’ because we do have to.

Simple, isn’t it? You appoint a king arbitrator, and we’re all done. His word is law, except for when someone doesn’t hear it and then it isn’t law. So his word is trust us. We may freeze accounts, we may not. Why worry. Be happy.