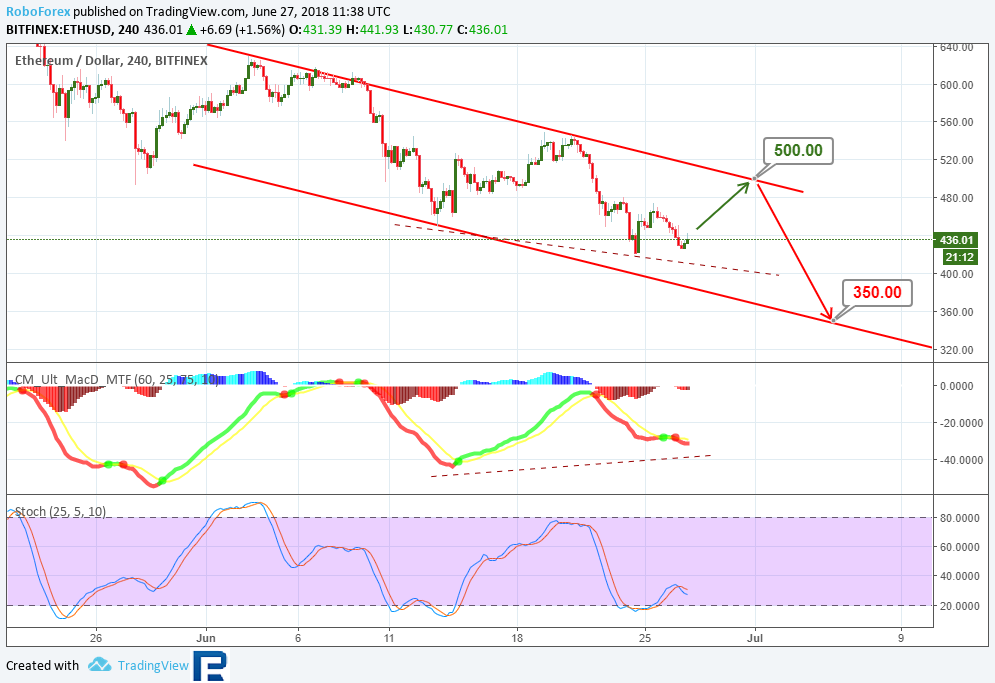 Technically, Ether is steadily going down on H4; however, the price is converging, which could mean the price may pull back to the resistance at $500.

If this level is tested, a new impulse may form to push the price till the support at $350. Another short term scenario is range trading within the support at $420 and the resistance at $500. 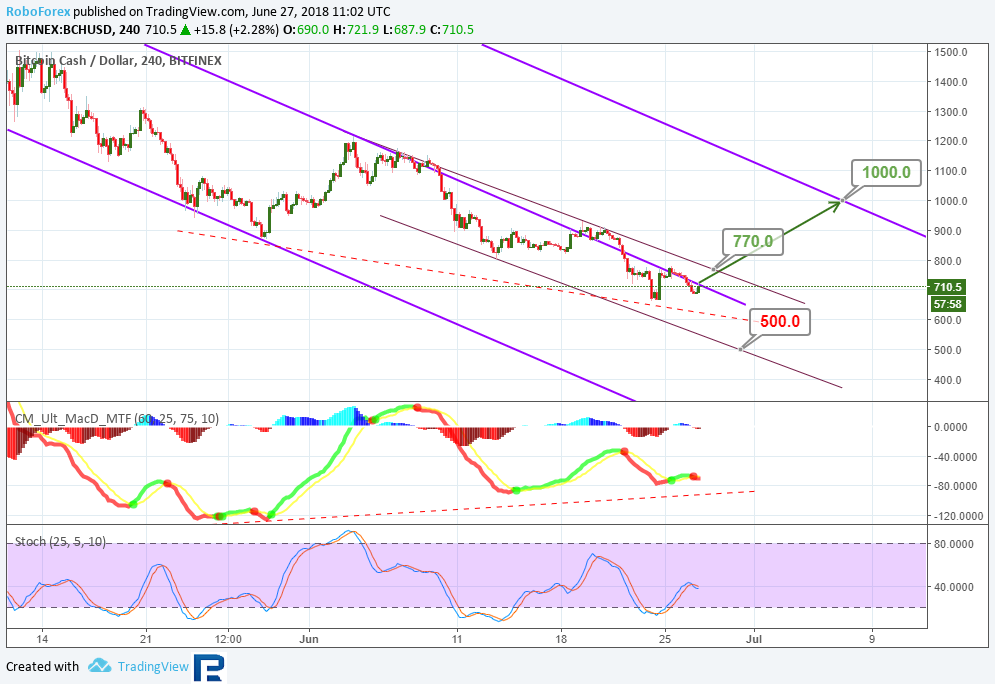 In terms of chart analysis, Bitcoin Cash is still downtrending. This may well change soon, though, as the price is testing the resistance for the fifth time now on H4.

After each test the price hit a new low without touching the support, which means the downtrend may be fading out. Another factor speaking for this is the MACD and the price convergence, while the Stochastic is out of the oversold territory.

The major resistance is now at $770, and once it gets broken out, an uptrend may move the price to the projection channel resistance at the round number of $1,000.

However, a new downward impulse is also possible, with the price going to the short term descending channel support at $500. 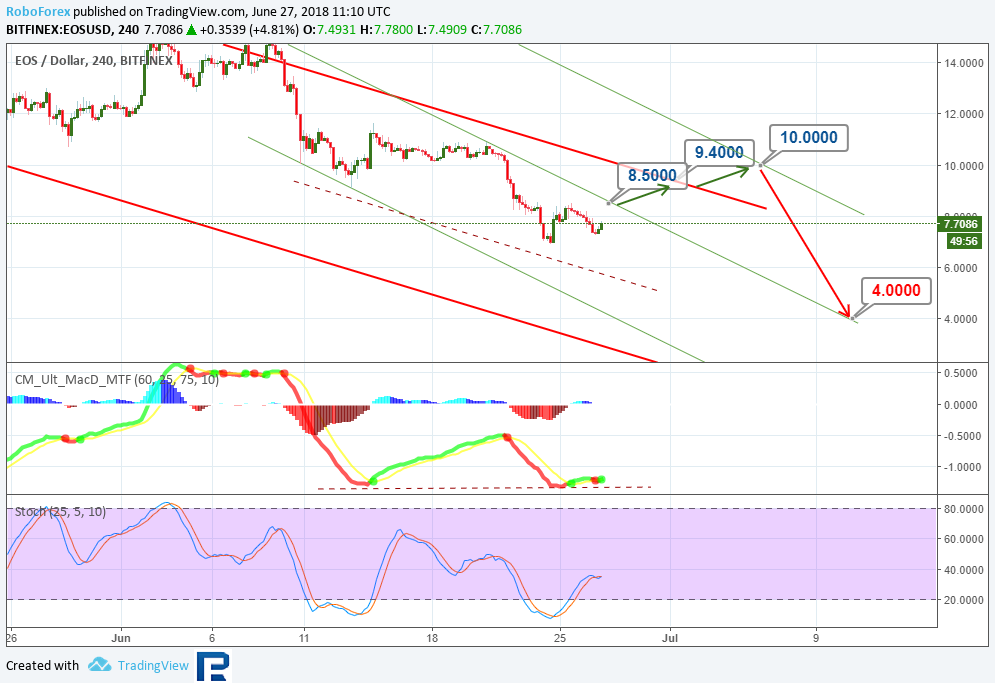 EOS is currently downtrending, be it short, mid, or long term. Still, there are some points telling us a pullback is possible.

The first point is that the support has not been touched for long, with the price constantly making new lows. Then, the price and the MACD are converging, and the Stochastic is coming out of the oversold territory, which may also signal for a reversal.

Meanwhile, the short term downtrend resistance at $8.50 is a major obstacle against the potential growth. If the price still manages to go ahead, its first target will be at $9.40, which is the midterm descending channel resistance.

After breaking it out, the price may go ahead to test the round number at $10. After that, a new downtrend may form with a target at $4.

Litecoin is downtrending steadily in a channel, and one may think the price is heading for $10, both by sentiment and the trend.

However, this is just at first sight. Stochastic has already left the oversold territory, while the MACD and the price are converging. This may well mean an ascending pullback.

If the short term resistance at $85.45 gets broken out and the price manages to stay above it, this will be the first signal to confirm the reversal.

The first target for the new ascending trend may be at $100. However, if the price fails to break out the resistance, it may continue falling and head towards $20. 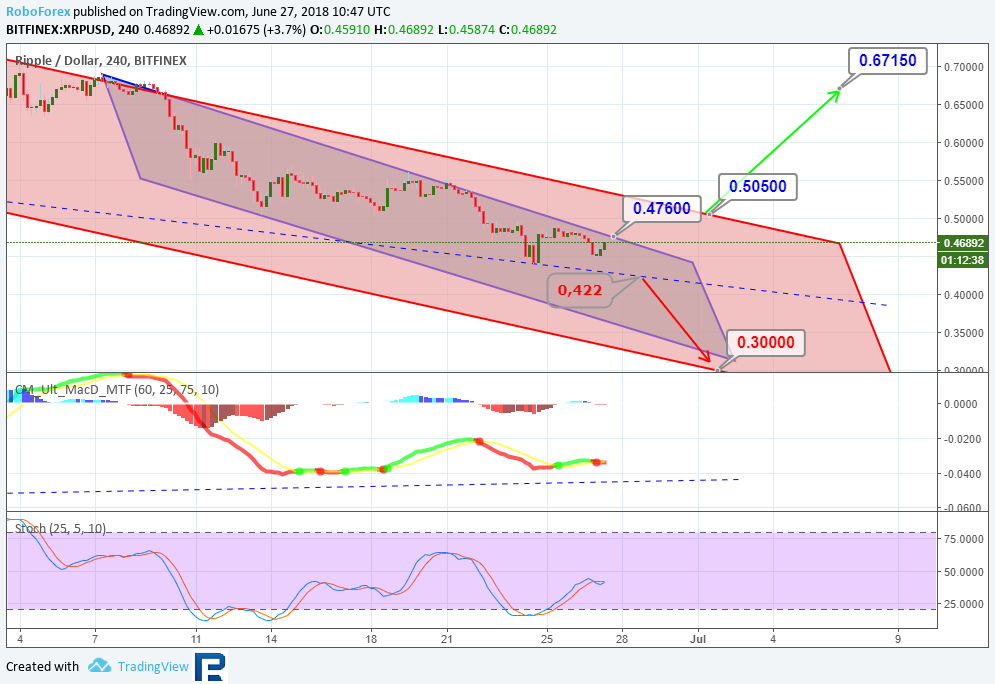 Just like many other top cryptos, Ripple is downtrending. Technically, the current descending trend targets may be somewhere near the support at $0.422. If the price breaks it out, it may then go down towards the short term and the long term trend support at $0.300.

However, a short term pullback may occur, too. As such, the MACD and the price are converging, while the Stochastic is leaving the oversold territory.

Even the very testing of the short term descending channel resistance may mean a new rise impulse, which may however, take place only when $0.476 gets broken out.

After such a breakout, the price may head to the major channel resistance at $0.505, which, if broken out in its turn, too, may signal a midterm trend reversal with the price heading to $0.671.