Ethereum,News Ethereum Fees Spike to $1 Even as Transactions Fall to 600,000 – Trustnodes

Ethereum’s fees have suddenly risen to nearly $1 per transaction even as network usage is around half of its all time high in January when it reached around 1.4 million transactions a day.

Ethereum is currently processing “only” 620,000 transactions, yet fees have suddenly spiked beginning around the time we were test-running Status on June 30th.

The gas limit remains unchanged, suggesting ethereum has capacity for around 1.4 million transactions, but total gas usage is at all time high.

Gas is just a unit of measurement, similar to bytes in bitcoin. You need to currently pay 97 gwei per gas for an ethereum transaction, with gwei itself being a unit of eth as in one eth = 1,000,000,000 (one billion) Gwei.

So, what exactly is going on? Apparently some decentralized exchange project in China is asking people to vote for what coin to list, with the winner determined by how many addresses have voted.

The idiotic set-up may be a consequence of China’s ban of crypto exchanges which has clearly deprived them of some basic knowledge, such as the number of addresses is a completely meaningless measure as anyone can create as many addresses as they want.

Yet a no name project, which will remain unnamed for we certainly don’t want to encourage this sort of behavior, can’t possibly be having so much influence.

So when we looked at the stats yesterday, there was a different and unrelated project which accounted for some 30% of all transactions.

An airdrop, clearly, with such airdrops by one project or another being a fairly common occurrence and a familiar feature in the top gas users listing.

Yet if they are a daily occurrence, what is so different so suddenly? We can only speculate with the aid of some facts, such as this table: 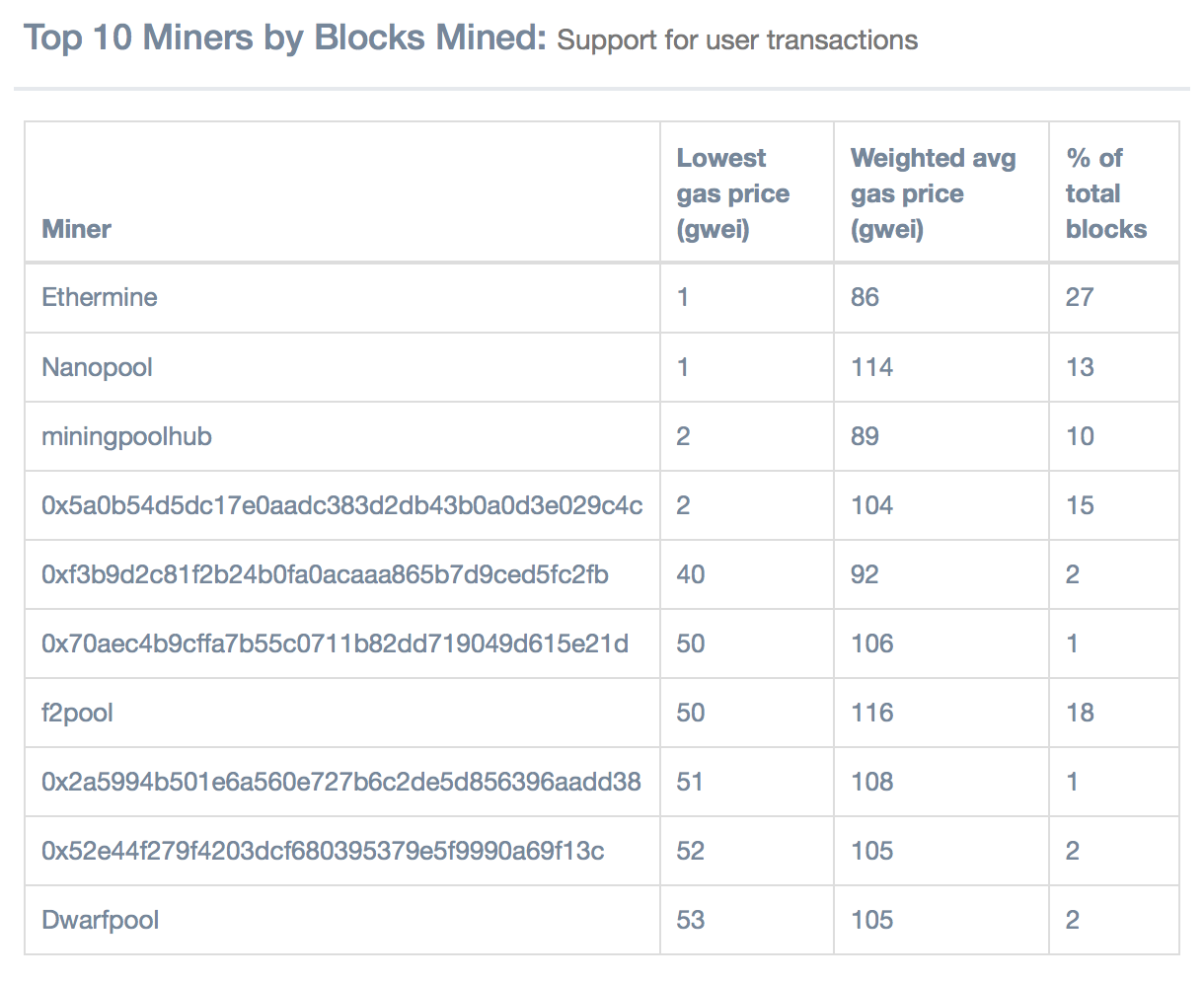 If we are correct in interpreting the above, F2Pool and DwarfPool seem to have set their own limit whereby they appear to not accept transactions below 50 gwei in fee. That being around 50 cent.

Yet, quite interestingly, that percentage of blocks found for Dwarfpool is correct. It has dropped to just 2% from at least 20% going by memory.

Miners seems to have decided to punish the pool, which effectively singlehandedly decided to not raise the gas limit, and thus capacity, and so save the kitties.

Despite some protocol improvements to address their concerns regarding orphans (uncles) for which they get paid in any event, ethereum mining pools have nonetheless still failed or refused to increase the limit.

We can only think of greed as a reason. Despite receiving billions through block inflation, they may be thinking some high fees in addition would be something they can get away with.

And if the latter is not the case, then why are they not themselves developing protocol improvements which can lower orphans and thus increase capacity.

With the billions they receive, they certainly can afford it. And as far as node resources are concerned, our pretty vanilla internet connection goes at 2MB per second, while ethereum is currently running at 1MB per 10 minutes.

Still, proof of stake will come soon enough and ethereum can get rid of these miners who cluster themselves under pool operators who probably don’t care one bit about the network but whether they can make an extra penny from some cats.

Yet the other side to it is some common sense from dapp developers, especially during this temporary transition period but even thereafter. Does something like MakerDAO, for example, really need an on-chain transaction for every single action. Can’t they bundle say 10 or even 100 actions into one on-chain transaction?

The question is not rhetorical as the answer may well be no, yet for some dapps it would probably be yes. Even if there wasn’t some temporary constraint, when the answer is yes then state channels should be utilized because no one wants to deal with MetaMask every-time they click around then wait for the tx to confirm and so on.

User experience happens to align with smart usage of the blockchain, so once a new generation of blockchain devs is trained and there is a lot more manpower to look at these things, a lot more efficiency may be gained.

For now, however, miners should just increase the limit and stop being greedy or users might start getting angry and call on devs to fire them quicker.

While, as far as users are concerned, perhaps the best action right now is to refuse paying a high fee unless you really must transact quickly. Go watch the World Cup or something. Brazil v Mexico should be a hot match. Engaland plays tomorrow. See if the queen maybe shows up (not gone appen, the princes maybe).

What happened to Augur by the way? They were meant to allow peer to peer betting on: Will En-ger-land win the World Cup (Yes! Not gone appen, not gone appen).