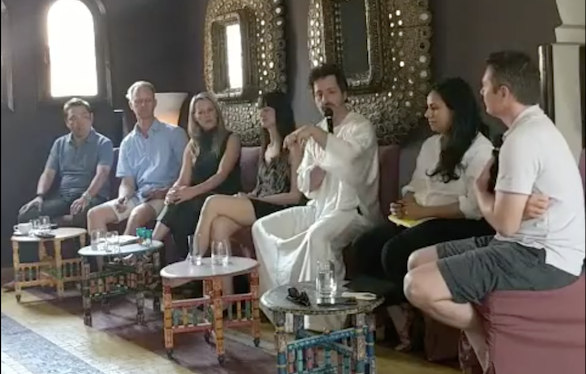 You think you’re going to an “ordinary” blockchain summit and suddenly Google’s co-founder shows up. Wearing a Moroccan Djellaba, you know you’re sitting next to a pretty extraordinary man.

Wealthy and powerful, he owns the biggest artificial intelligence company on earth. Google, with its mission to organize the world’s knowledge, is the homepage of billions. A background staple of modern life. A place we go to many times, everyday.

For 20 years they’ve ruled the world, or at least information, but now that they’ve become so big whispers have become lauder with many wondering what could they do with so much control.

In the blockchain space, of course, there is far too much to do for anyone to sit back and wonder. Disrupting banking, disrupting industry, and some say crypto coders may well disrupt the big four of Silicon Valley, including Google.

That’s a path few envisioned even a year ago, but the rise of ethereum, and its captivating smart contracts technology, we can now see how the disrupters can themselves be disrupted. We’ll let Brad Burnham of Union Square Ventures explain how:

“We’re living in an area of very rapid consolidation around Google, Facebook, Amazon, and competing with those, what I would call data monopolies, is not really possible by offering a better service.

We actually saw this movie in the mid 90s when Microsoft consolidated the entire PC software industry. IBM tried to compete with Microsoft by offering a better operating system called OS2, and it failed miserably.

What ultimately undid Microsoft’s hegemony in the mid 90s was a shift in venue from the desktop to the web and a shift in business model from packaged software to open software.

It was really impossible for Microsoft to open source Windows given how much they had invested in their existing business model, their distribution channels.

If we think of the internet as an open public communications medium that fundamentally altered the way the entire media industry works, blockchains are open public data stores.

The thing that Google, Apple, Facebook, Amazon, will not be able to do is open up their data sets. And so the argument we made to SEC is that this is the next wave of technology.

If we’re going to open the market for another wave of innovation, for another emergent bottom-up start-up innovation, the only possibility we have is to change the game. And this is the best chance we have.”

Before we get to Brin and transcribe what he said, we’ll need to give more generally what those that might think they are at risk of disruption may be thinking. Here, Commodities Futures and Trading Commissioner Rostin Behnam says it best:

However, economic elites know all this. They will not be idle… If the kleptocracy controls technology and the means of distribution, then they simply accumulate more wealth at the expense of their citizens, draining wealth in cryptocurrencies rather than dollars or euros.

Virtual assets may be a stranglehold…. [can] become a means of deeper control of wealth and a means of exploitation.”

There is little we can add to either of those very fine statements. After telling what is probably a joke regarding mining ethereum with his son, Brin says:

“There were very capable search engines at the time, but taking the need for search, find information, very seriously. Saying look, the repository of the web is growing and fundamentally it is going to encompass pretty much all of human knowledge, and it’s important for people to gain knowledge. You know, taking that leap and going from sort of saying like there’s these modern PCs people use, they can do real computation when you tie a bunch together.

And with Gmail I would say the same thing. There were definitely web mail services at the time, but we kind of took it seriously in the sense that no you can have an enterprise grade, top level, with gigabytes of storage which at the time sounded like a lot. You know, you can offer every person on earth, so that was kind of a leap.

I would say that these cryptocurrencies are the same kind of thing. First even taking the research work of Diffie–Hellman team, and taking the public key cryptography, and the fact that can exist is kind of mindboggling to a mathematician. But then the fact that’s widespread across the internet now, and these… you know bitcoin, the Proof of Work thing, saying oh my god you can build this thing that kind of people have to do little hashing and find this stuff. That idea, it’s like no, no you really can make this global network where people take it seriously. It’s kind of extraordinary, it’s mindboggling, to me.

Nowadays I look at things like Zcash, for example, and I don’t know much about cryptocurrencies but the fact that people are using these zero knowledge proofs, which is very theoretical computer science, you know pretty recently, and actually using it in the wild, I mean it doesn’t seem like it should be even possible to have that work to be honest. I’ve tried to go through the maths myself and I haven’t quite made it through. It’s really mindboggling.

I see the future as taking these kind of, researchy kind of out there ideas and make them real. I think some of the Google X work is like that where it’s sort of drone delivery where… you know drone are kind of fun toy kind of thing but then using them to try and make a real service, and succeeding. That’s the goal.”

There is little you can read from the above, and at the same time there is plenty you can speculatively read. Taking it seriously, enterprise Gmail, toy drones… he’s basically saying we are looking at all this stuff in this space and we might start launching something related.

What that would be, however, is not easy to say. A token, perhaps? Maybe incentivizing nodes that might be used for searches or artificial intelligence. Maybe something else. We’ll probably find out soon enough for effectively Brin’s appearance is probably Google’s way of making a somewhat low key announcement that they are probably entering or looking to enter the blockchain space somehow.