The ethereum based betting and predictions market Augur has finally launched after some three years in development.

Its price is down today some 5%, but its launch is just about in time for the world cup where France plays Belgium later today and England plays Croatia tomorrow.

Naturally, we thought to give it a try in a testrun. That’s where we pretend we’re some ordinary guy or girl with some eth and MetaMask installed as our set-up.

First, we have to download the Augur dapp. That was an easy affair and all went very smoothly, just like any successful software install. So once all is done, we’re met with this screen:

That’s using Infura, which is a node infrastructure provider, so we don’t need to have an ethereum node installed. Instead it connects to the Infura node provider.

Once we do ask it to connect, we have to wait a bit for it to sync. It took about 10 minutes for it to do so, giving us a nice little break.

Once all is done, the stand-alone dapp becomes a background thing as it opens a local connection in the browser. We’re effectively kind of outside of the web, and we’re sort of only on the ethereum network, but all through the browser: 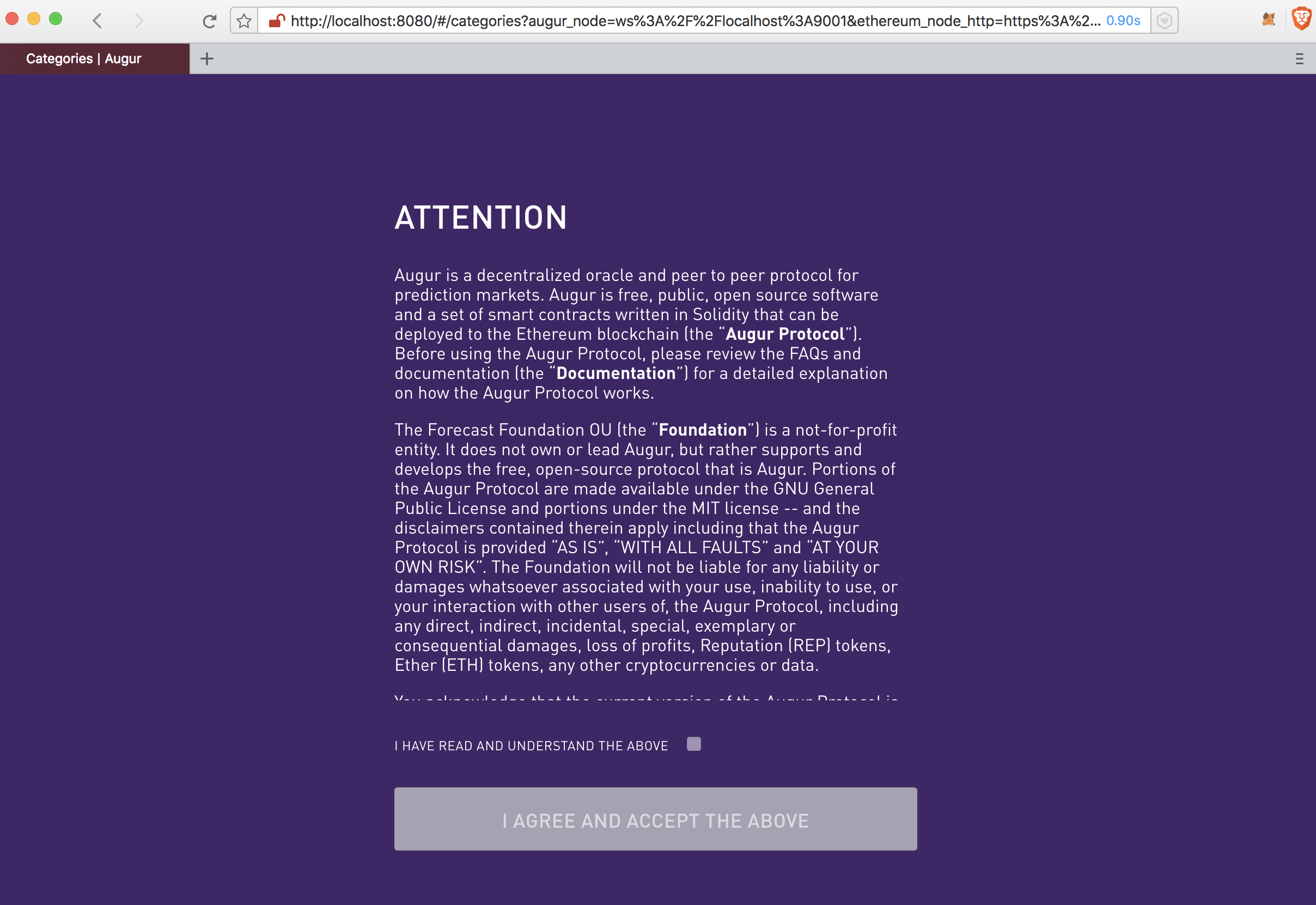 The experience is very smooth. The dapp is fast and very responsive, but understandably, as it has just launched, there isn’t much activity:

It’s the world cup, so we want sport. There, we have England. There’s also France and Belgium. The England match, however, is far hotter. They have not been this far since 1990. If they do beat Croatia, it would be the first time since 1966 that they make it to the final. 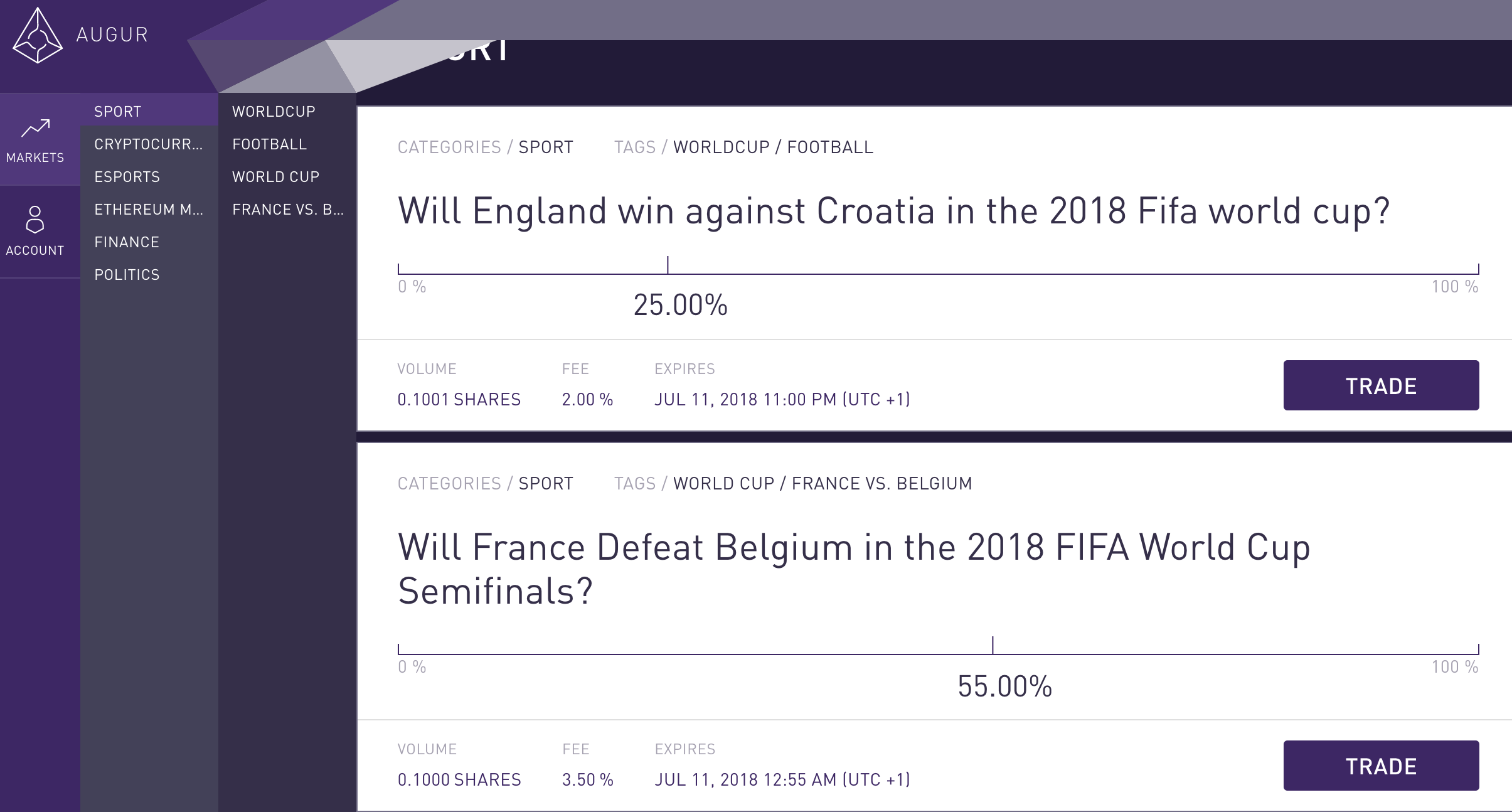 All looks fairly intuitive. Rather than betting for England or Croatia, we’re betting on Yes or No to the question. So let’s zoom in and see a very nice screen: 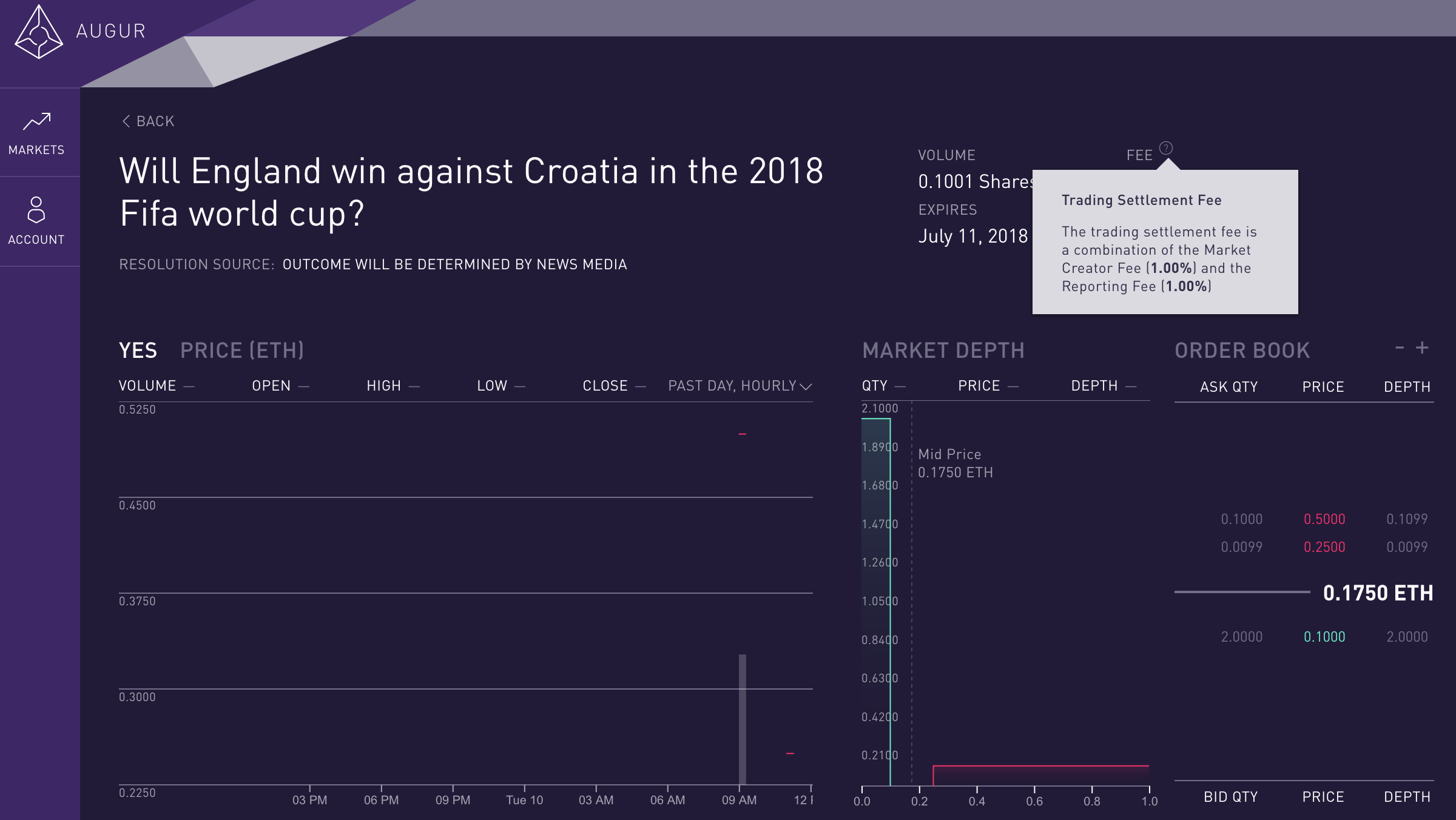 There is a lot going on here, and all looks fairly pretty, although some of it might not be working. You’d think there would be numbers next to volume, open, high and so on, for example.

We can see there’s a fee. At 2% it doesn’t sound bad. Betfair, for example, has a commission of 5%, but only on winning bets. Here, win or lose you presumably still pay the 2%.

It’s fine, we’re just test running, and we have some eth set aside for it, so let’s scroll down and place this bet:

We’re told we have to first connect our eth address to their smart contract, which we did, but afterwards, things didn’t go very well.

Once the connecting transaction confirmed, we tried to place the bet again, but were met with a pretty scary screen on MetaMask:

As you can see there, it’s asking us to pay ~$30, with pretty much all of it being the transaction fee save for the one cent which is the bet itself. We rejected that transaction of course and tried again, but same thing.

The problem here appears to be the gas limit is way too high, but we don’t know why it is so high. We could have of course entered a lower gas limit ourself, but then we wouldn’t be sure it would go through and it would be besides the point in any event.

That’s because we’re trying to be some ordinary guy out there who shouldn’t have to play with gas limits or anything like that. All that “nonsense” should be handled by the dapp or MetaMask. We’re good enough to click, but nothing else.

It is of course helpful that there is the option of changing the gas limit or gas price, but it looks like there’s some problem here somewhere.

And it’s not fees. Thats pennies at 10 Gwei, it’s the gas limit which is way too much. By comparison a simple transaction has a gas limit of 21,000, while here it’s 6 million probably because something has gone wrong somewhere.

We’re sure it will be fixed, and perhaps it is something to do with our own set-up which was created through just click and go, with no modification. As an end-user, however, unless you’re desperate you probably move on, which is the main reason we’re trying to be just a normal guy out there.

So, we give this a 3 out of 5. The gas thing has some role in that rating, but we’re sure it will be fixed and some mistake here or there is expected early on.

Beyond that, the app is fairly smooth, very fast, the betting fee seems reasonable, the nice charts would be nicer with actual things in them but that might be due to low volumes, but accessing the dapp isn’t too convenient. Although we must say the setup through localhost is pretty smart and once you’ve downloaded/installed, then it’s just another tab on the browser.

In general terms arguably it is more convenient because to bet through centralized exchanges you need accounts, AML and so on, in a process that might take days.

If for example you care to only bet once during the world cup, or say during elections, then if you have eth arguably Augur, if it gains some more liquidity, would be more convenient. That’s obviously assuming the gas thing isn’t a fluke, but we’re kind of fairly sure it is.

Centralized betting platforms of course provide much of what Augur does, including elections betting and so on, but Augur is much more open and transparent since it’s all on the blockchain.

That also means it is more censorship resistant, which has one eth developer worried regarding its potential misuse. However, as stated, blockchains are public network so tracking is possible with traces left all over the place.

Traditional enforcement methods have worked in the blockchain space, so perhaps more of a concern for Augur would be getting people that want to use it.

That’s not an easy task for any project, unless it has kitties, and would require plenty of marketing, but just how liquidity will develop remains to be seen.