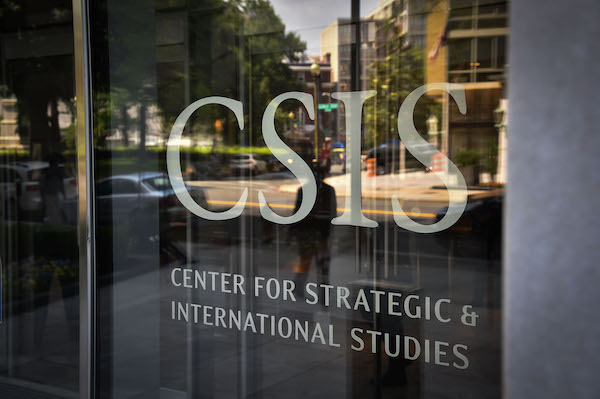 NATO Secretary General Jens Stoltenberg arrives at the Center for Strategic and International Studies and is welcomed by President and CEO, John Hamre

The Center for Strategic and International Studies, an influential centrist Think Tank based in Washington, has suggested cryptos can be used to get aid directly to those in need in Venezuela. They say:

“The use of cryptocurrency to safely transfer worldwide donations, following a model like EatBCH, is a novel approach already creating a positive impact for Venezuelans on the ground today.

More peer-to-peer electronic cash transfers should be encouraged to assist with humanitarian aid from abroad.”

EatBCH is a grassroots aid movement of sorts born perhaps from one of our articles when we asked in January Can Bitcoin Cash Rescue Venezuelans?

We had read the terrible stories of children starving, of hyperinflation, of a human tragedy in a nation that is very much on its knees, so we naturally wondered whether cryptos can help.

That led to cryptonians sending some small amounts to Venezuelans online. There is of course no need for banks in this space, permission or anything, so they just started sending money in a peer to peer manner.

Some of them happened to be both cryptonian and Venezuelan. Word quickly got out, and an entrepreneurial samaritan started EatBCH.

That created a pipeline of sorts where cryptonians from their own home can directly convert Bitcoin Cash or other cryptos into a nice hot meal for starving Venezuelans.

They quickly gained trust because they showed a number of pictures of what looks like food banks, with this aid continuing even today as shown by all the pictures on their twitter.

Apparently, according to the Washington think tank, Venezuela is not accepting foreign aid. Yet, this is crypto, so what the Venezuelan government accepts or doesn’t accept, no one cares in this space.

Only recently, for example, we wrote about a very happy Venezuelan who showed bags of rice bought with crypto, in this case Nano. He said he was going to feed ten families with it.

The interesting part here, from a geopolitical perspective, is that in cryptos no one needs to know who paid what. International aid agencies, for example, could donate cryptos to Venezuelans on the ground without the government knowing necessarily.

Not that feeding people is a crime, but there is a far bigger picture here than just Venezuela to engulf potentially all aid to poor countries.

Instead of our money going to corrupt governments partly because ordinary people do not really have bank accounts in these places, our money can instead be our crypto, and thus as long as they have a phone, we can give it directly to farmers, or in business grants, or to samaritans, churches and so on.

That could potentially have a secondary effect of giving people a bank account in the way of a crypto wallet. In combination with old versions of smart phones making their way to these places, the end result might be teaching them how to fish rather than just giving them some fish.

Smart people there will see the opportunity and will stand up to take it. Gradually word will spread. Cryptos, moreover, now are not really that complex any longer, so all should be able to easily grasp how you can send it, receive it, and so on.

With bank accounts now and easy value transfers, commerce should flourish. Crypto volatility is a problem, but that might be addressed too once ethereum removes the miners’ pressure by going Proof of Stake.

While in some countries where inflation is so high, that volatility probably doesn’t even matter. Making cryptos a solution even now.

It certainly is in Venezuela, at least to some extent. Shops there are now probably willing to accept cryptos, so allowing it to turn into food.

The real jump would be if they then pay farmers in crypto, with farmers then able to use that crypto to buy seeds and so on, thus closing the trading cycle.

That would probably be some time away, if ever, but as a means of transferring value, cryptos currently outperform probably any other method, especially internationally. Which means at least some aid agencies will probably at least try to copy the EatBCH method.