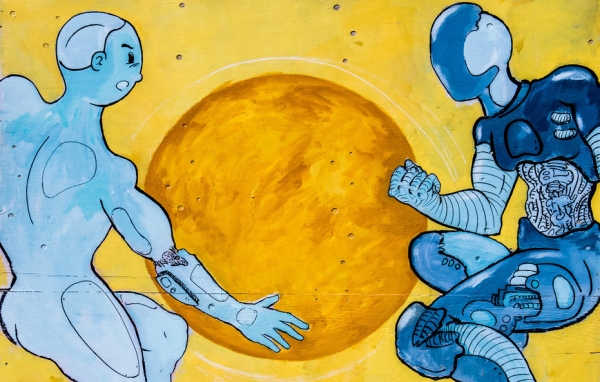 Ethereum’s price is rising today, briefly crossing above $450 and currently standing not far from it, but on the mind of many ethereans is this sudden congestion which occurred almost overnight and while the network is processing only 500,000 transactions a day.

Someone, or something, is eating up a lot of gas, sending fees for normal transactions to near $1, and for dapps transaction to a bit higher than that.

That someone is eos, according to a dapp developer. Ahead of finishing their year long ICO and the launch of their blockchain, eos started clogging up ethereum’s network by orchestrating useless airdrops, the dev says.

Concrete evidence to show so isn’t quite available, with Dan Larimer, eos’ lead developer, denying the allegations. Yet there is circumstantial evidence.

Eos apparently hit 1,275 transactions per second today, coinciding with the congestion, while their blockchain has barely managed to keep running amidst bugs, Ram cornering by Block Producers, as well as freezings of accounts, leading to speculations these transactions are fake and just for marketing.

In addition to  one such clogging token being funded by someone who has a lot of eos tokens, according to the dapp developer, there is also the simple fact that ethereum’s capacity is 1.4 million transactions, not 500,000.

That so few transactions are consuming so much gas suggests there has been an abnormal increase in tokens transactions, with such increase being effectively overnight.

Eos, of course, is trying to sell itself as the blockchain where you can do airdrops, so perhaps showing you can’t currently easily do them in eth might be a strategy.

Yet, ram costs in eos probably means that even with eth being congested, it would probably still be more expensive in eos.

So it is worth pointing out that there is no hard evidence to show eos is behind the congestion, but if it is indeed eos attacking eth, then how should eth respond?

The best answer to that would be to increase block propagation efficiency so as to lower uncles, thus allowing miners more comfortably to increase the gas limit. Thus making this a win-win situation as the anti-fragility quality of ethereum leads to its improvement.

Yet, eos raised some $4 billion, so if they wanted to make useless spam transactions then presumably they can do so up to the new limit too. However, it would cost a lot more.

Thus focusing on getting long term solutions out that increase capacity to the point even eos can’t clog it, would probably be the best way to spend precious coding time.

The worry is however that some ethereans, and especially if the circumstantial evidence starts becoming a bit too much, might play less defense and more attack.

The bug ridden code of eos could lead to political exploitations, same style as allegedly Bitcoin Core devs did in Bitcoin Unlimited.

There are moreover some weaknesses from which it is difficult to defend. When Ghash reached 51%, for example, bitcoiners DDosed it out of operations. That Fcoin hasn’t experienced the same is a testament to the fine standing of ethereans, yet if their idiotic voting set-up is indeed causing some of the congestion, then patience might run out.

Ethereum, after all, is the land where hackers hack hackers. Most of it is fun and games and ethereum devs are upstanding men and women, but it would be very much foolish to risk courting their anger by playing in a foul manner.

Not that we are suggesting eos or Fcoin is, but permissionless goes in many directions. So we should think this is all temporary.