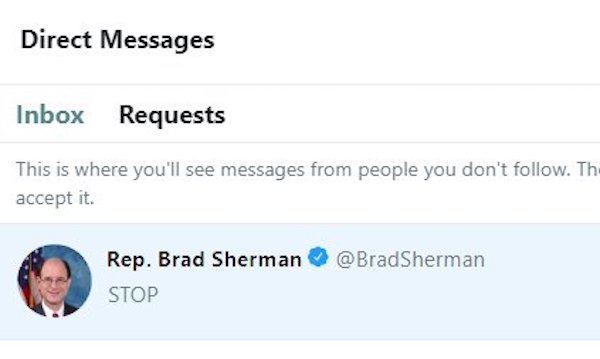 A career politician who has been elected to congress for the past 21 years, made his way once more to a crypto hearing to tell the public that bitcoin should be banned.

He argued that the current financial system works perfectly fine, that credit card payments work fine, that bitcoin was not needed and that it is only used by criminals.

Experts who had been invited to testify very much disagreed with Brad Sheman’s blinkered statements, but it was online where the most persuasive arguments against this rank and file Democrat were made.

A bitcoin trader shows evidence on twitter that one of the top contributors to Brad Sherman’s campaign, a credit card processor called Allied Wallet, had some $13 million seized in a settlement following allegations Allied Wallets facilitated illegal gambling operations. The evidence shown by the cryptonian follows:

This apparently led Brad Sherman to ask the cryptonian to stop (featured image), with one cryptonian stating:

“He thinks he can solve this the same way he responds to automated text messaged form his dentist.”

Despite this hypocrisy where Sherman appears to be serving his campaign contributors rather than Californians, he was nonetheless able to win 65% of the votes in the primary that occurred this June, with the mid-term elections now in November.

The very liberal Californians apparently payed no heed to serious allegations that a former Sherman aide was accused of sexual misconduct.

“It definitely felt like an environment where this was just the way things were,” Jessica Yas Barker, a former field representative for Sherman’s office, said. “I did not feel there was any channel by which I could report things.”

What’s more, discussions on sexual harassment at Sherman’s town hall meeting in Reseda in January 2018 were removed from the final video recorded for YouTube.

This man, however, will probably return to congress after the mid-term elections, as he has since the 90s, even though he “led the House revolt” against the original $700 billion bailout plan in 2008, and yet now with a straight face says bitcoin should be banned.

And more than that, says the financial system works fine, payments work fine, so rhetorically asks why do we need bitcoin. Has he forgotten, or do his lips only play the tune that pays for it?