Gods Unchained “Raises” $250,000 in a Genesis Sale of Ethereum Based In-Game Items 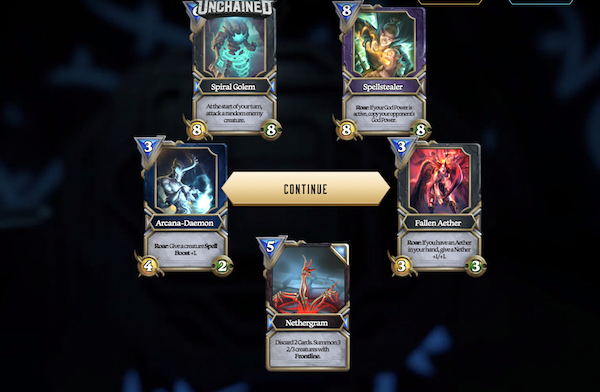 Ethereum based games are rising as an interesting use case for smart contract powered blockchains with the unique selling point being fairly simple: you actually own the in-game item.

Some $50 billion worth of in-game items were traded so far this year, according to Fuel Games, a new start-up that launched EtherBots and now plans to launch Gods Unchained, a competitive trading card game built on Ethereum.

Individuals are currently able to buy its Genesis Cards, a set of 380 unique cards only available during the on-going Genesis Sale which has a hard cap of $15M in sales.

“They’re a limited edition first run essentially,” Robbie Ferguson, COO of Fuel Games, says, with Fuel Games itself recently raising $2 million from Coinbase Ventures and others, and have further raised another 548 eth ($253,000) so far from the sale of the Genesis Cards.

The game itself has not yet launched. “The beta is launching in roughly two months,” Ferguson says. In the meantime, they’re further working on state channels for extra scalability.

State channels are sort of like second layers where you bundle transactions as well as the state of the smart contract. James Ferguson, CEO of Fuel Games, says.

“We’re building project Ansible, which allows generalized state channels on Ethereum. This means it can be used for so much more than just who owes whom an incremental amount of money.”

That should go some way towards a more efficient use of ethereum’s current capacity, but it looks like the only thing that happens on-chain here is what actually matters: the ownership attribution of the ERC721 unique token that corresponds to the card.

The rest is run on enterprise level gaming platforms that are industry standard, making the gaming experience itself little different than any of the other latest games.

This hybrid method makes it a trade-off between full decentralization and convenience, with Fuel Games and by extension Silicon Valley seemingly thinking the in-game item ownership itself is a sufficiently big use case.

We zoomed in on that point with both Robbie and James to better understand the set-up and to get an idea of what game developers can and can not control in this hybrid.

The obvious first point is: what is to stop them from launching the same decks with the same graphics in the future? Once all is launched, they plan to continue launching new decks of 100 cards, so what if they replicate in graphics or features the genesis cards, thus making them a not very limited edition?

“They would have different ids so you could always tell that. Also the fact that it’s transparent means it would be super obvious if you tried to reuse the image and there would be outrage. The ids/proto numbers are the source of truth which all the contracts deal with though,” James says.

In other words, you can always know it is a genesis card, but replicating the same graphics or features in the future is prevented more by social aspects.

There would need to be another Nakamoto to solve that as, of course, anything digital can be copied even if the graphics and so on were stored on IPFS or even on a smart contract itself.

Making the genesis distinction more of an historical aspect in an absolute sense, but practically they would of course have to abide by the limited edition promise.

Socially, the ID distinction might itself be relevant, especially in this fast evolving space, with the key point here really being ownership of the token.

“Each unique token references a contract which stores more in-depth details, as it would be silly to create instances of details for each with all the storage gas costs (trying to keep erc721s as minimal as possible),” Robbie says. James further adds that “the tokens have a reference to the proto of the card.”

What that means is that the smart contract contains the “DNA” of the card, with each token having their own “DNA” sort of thing. So when you log into MetaMask, it knows what specific card you have.

That means you can now take this card to another dapp because smart contract developers can simply copy and paste the DNA rules, so you can have your CryptoKitties play with your genesis cards and maybe you can even mix etherbots there somewhere because dapps are platforms.

Dapps can also be fairly flexible. They run on ethereum’s blockchain where ownership is concerned, but if you really wanted to try really hard, a smart contract can be very centralized.

We saw this recently for example on Bancor where tokens were frozen through giving privileges to the smart contract ownership key.

Smart contracts, of course, are if and then code based projects, so you can easily say if x key then x can do whatever he/she wants.

The difference is however that you can provably show that either no one has a privilege or that there was a privilege but now it no longer applies.

In a practical setting, this hybrid is needed because in the beta period of the project many things can go wrong. Gods Unchained thus has a one month period after the decks have launched when you can alter the cards, called a balancing period.

That one month period is to see in a live setting how the card performs, whether in effect it is a dud or whether it makes the game worse or better and so on, or according to their website:

While nerfing and banning cards is never great for anyone, sometimes it’s important, to keep meta fun and dynamic. So when something unavoidably slips through our testing process, we plan to catch it our balancing beta.

The balancing beta will be the one month period after a new set goes on sale. During this time, cards can be collected from packs but not traded.”

We haven’t looked at the code, but it presumably says something like: if less than a month, card can be nerfed, if more, there can be no alterations.

“Those [smart contract] structs can be adjusted until a switch is turned at which point they become immutable,” Robbie says while James adds:

“The proto of the card has encoded specific rules about when it can change (during the balancing beta), and when it can’t (after then).”

The balancing beta is around the fourth quarter of this year, James says, when “the genesis cards become immutable.”

Making this all a balancing act between decentralized ownership and training wheels with the improvement here over centralized games being incremental.

The idea seems to be that Gods Unchained is not just a blockchain game, but a cool or fun game that people want to play on its own right which also happens to have the in-game items as ethereum based tokens.

Thus making the blockchain part somewhat secondary and back-end, but with benefits over centralized in-game items for end users.

The most obvious such benefit is of course that you can send it anywhere, you can easily sell/buy it and so on, with the main one being that you actually own it.