During last week, the situation in the cryptocurrency market has not changed drastically. If anything, is has simply become stable.

This has reflected in the development of the correction phase, which has acquired an “ascending flat” format. “Flat” is the form of correction of a trend more in terms of time, rather then in terms of price.

The current format of correction can end both by exiting the current channel upwards (as it was with Bitcoin) and by breaking out the minimums with the subsequent reduction of the price of digital currencies. 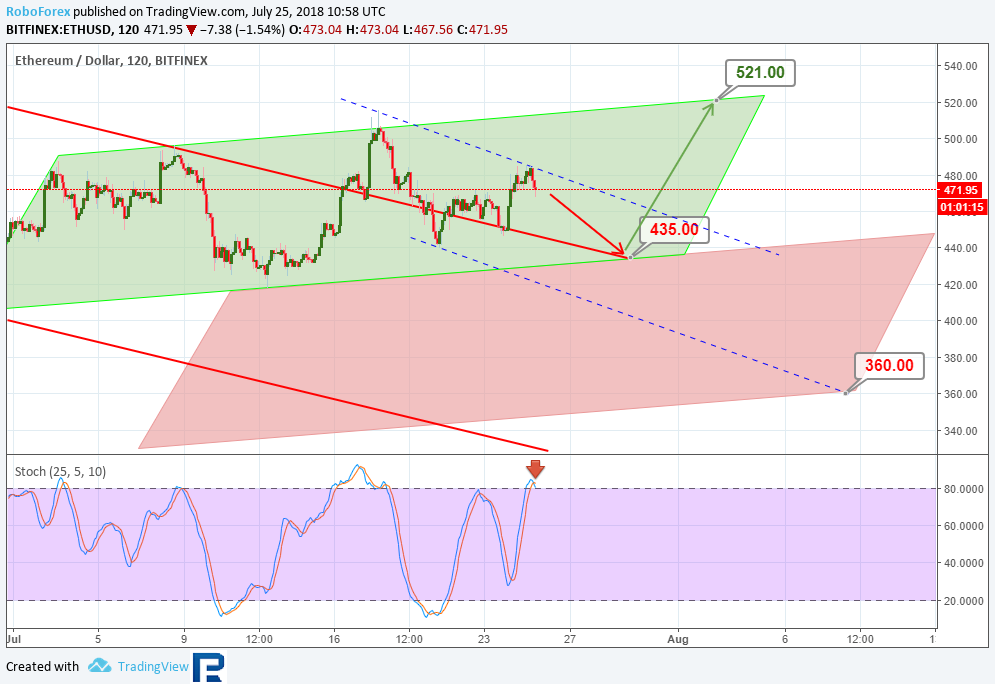 If we look at the technical pattern of Ethereum on H2, we will notice that the prices stay within the previous short-term growth channel, having overcome and having fixed themselves above the resistance line of the previous channel of the descending trend.

The “black cross” in Stochastic may indicate the potential drop to the support level of 453, thus making a way for a descending trend.

The breakout of the support level will be the signal of the ongoing development of the long-term descending trend.

Its target may become the support level of the lower projection channel at 360. If the support resists the onsurge of the sellers, the new growth impulse may take the direction towards the current resistance line at 521. 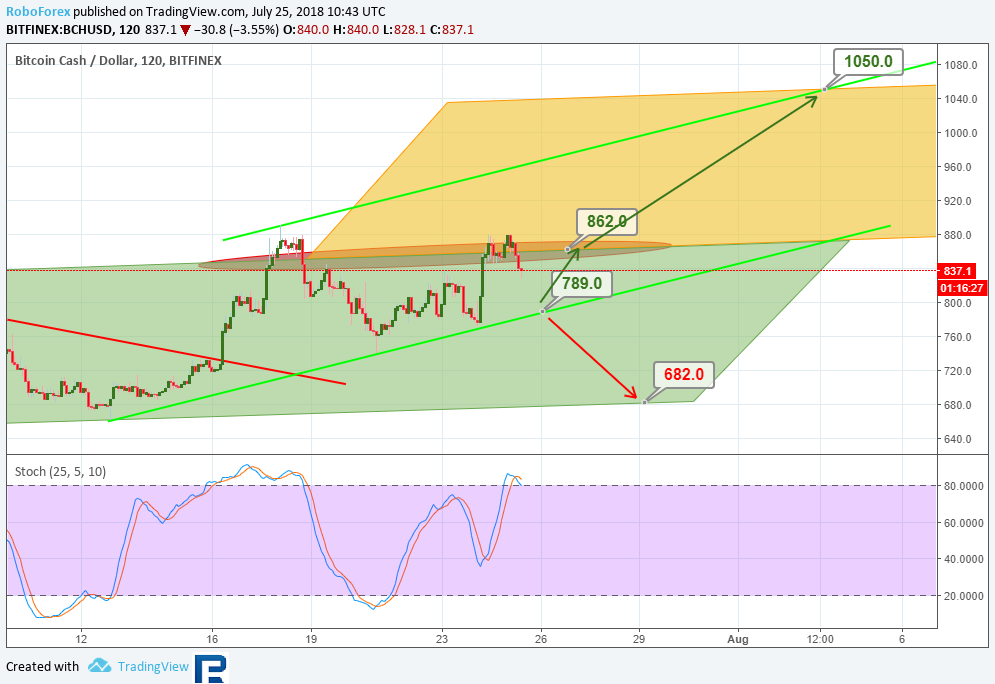 Analyzing the medium-term dynamics of Bitcoin Cash we can acknowledge the continuous growth of the correction phase with the gradual testing of the local resistance area. In the short-term outlook we can see the ascending price trend.

The possible scenario of the nearest changes in the Bitcoin Cash market can be the drop down to the local support line at 789 level.

The confirming factors in favour of this hypothesis can be: The “Black cross” in Stochastic and the end of the resistance area testing.

The further movement will also depend on how the participants will interpret the local drop. If the support line gets broken out at 789, the prices  may drop down to the primary support level at 682.

If after the drop the market finds support among the buyers, the new growth impulse will be able to overcome the resistance level at 862 and to reach the target resistance at 1050. 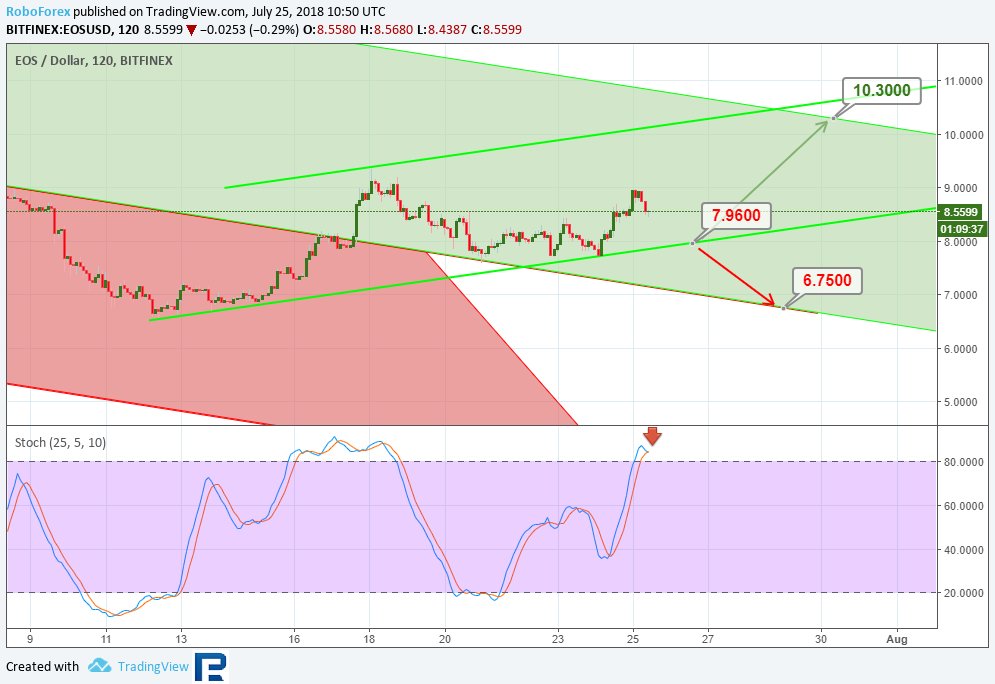 The technical pattern of EOS can be described as the creation of an ascending correction trend after the resistance line of the previous descending channel has been overcome.

On a short-term scale, we can expect the drop down to the support line of the current channel at 7.96, which is indicated by the forming of a “Black cross” in Stochastic in the overbought zone.

Further, after a bounce off, a new growth impulse towards the target resistance line at 10.30 can get formed in the market.

A possibility of a breakout of the support line cannot be excluded either. Such breakout can open the way for the prices to the primary support at 6.75, hence delaying the development of an uptrend. 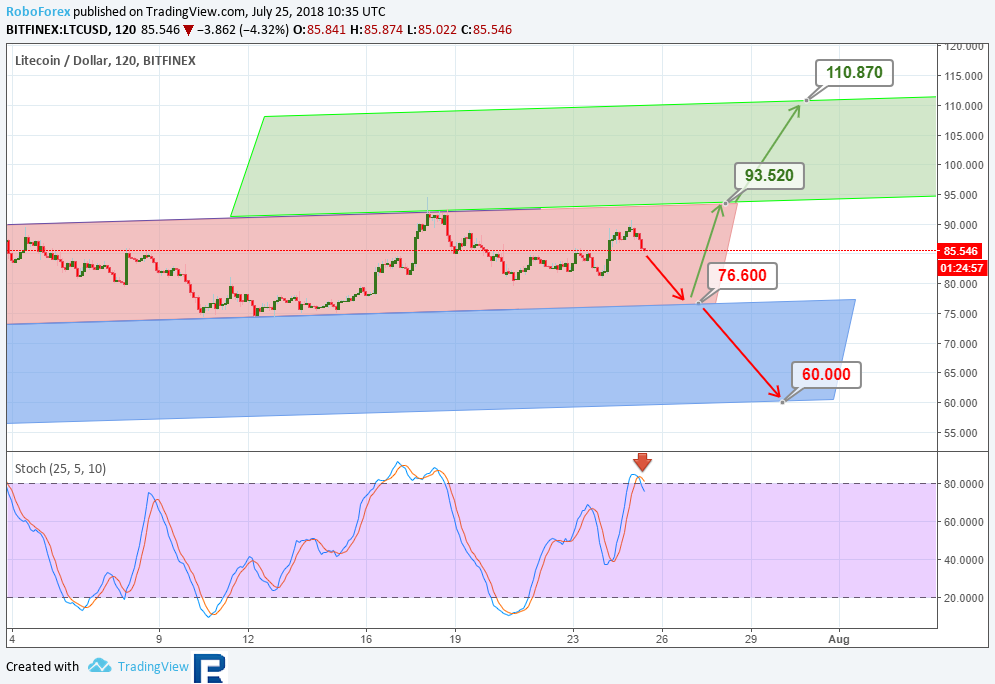 The Litecoin prices are within the ascending channel, but the “Black cross” in the overbought zone can indicate the approaching drop to the support level at 76.60.

The situation can further develop according to the classical model: either a “pullback or a breakout”.

The pullback will provoke another return to the resistance line at the level of 93.52. While its breakout will allow the prices to develop an uptrend towards the projection level of resistance at 110.87.

Conversely, the breakout of the support at 76.60 will allow the descent impulse to develop and to reach the support level at 60.00. 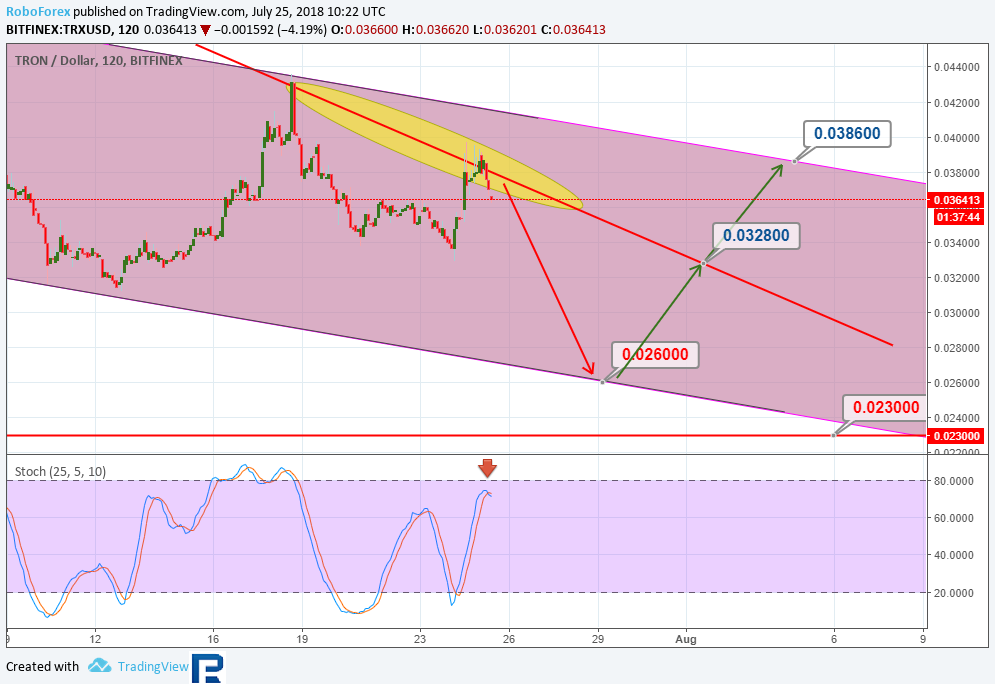 The TRON prices have again tested the resistance line of a medium-term descending channel, while Stochastic has formed a “Black cross”.

Jointly, these factors prepare the ground for the development of a descending trend towards the local support line at 0.0260, and, possibly, towards the primary support at 0.0230.

A pullback off the support level will practically inevitably lead to the breakout of the resistance line of the primary channel near 0.0328. 0.0386 level may become an immediate growth target, after the breakout of resistance.