Infura, a node infrastructure for dapps that lets individuals use say cryptokitties without needing to run a node themselves, is now serving some 35,000 dapps and developers.

That includes MetaMask, the plugin that allows you to access the ethereum blockchain from your browser, MyCrypto, the eth and crypto wallet, the ox protocol, Ujo, Oraclize, and far too many others to mention.

Infura is now serving some 10 billion requests every single day, up from 6 billion in February, with Michael Wuehler from Infura describing a request as follows:

“Beyond these 400,000 ‘write’ transactions per day, the Ethereum network supporting decentralized application handles many more ‘read’ requests in the form of JSON RPC API calls.

Just as with traditional web development, the number of read requests are often orders of magnitude larger than the write requests. INFURA is routinely servicing over 600 million of these ‘read’ requests per day.”

That statement was made about a year ago, with ethereum currently handling around 800,000 transactions per day.

The number of requests for information seems to have increased more than 10x in the same time-period, suggesting there has been some considerably growth in ethereum’s ecosystem.

Around two petabyte a month are being transferred by Infura to handle all the transactions and the requests for information by dapps or developers. 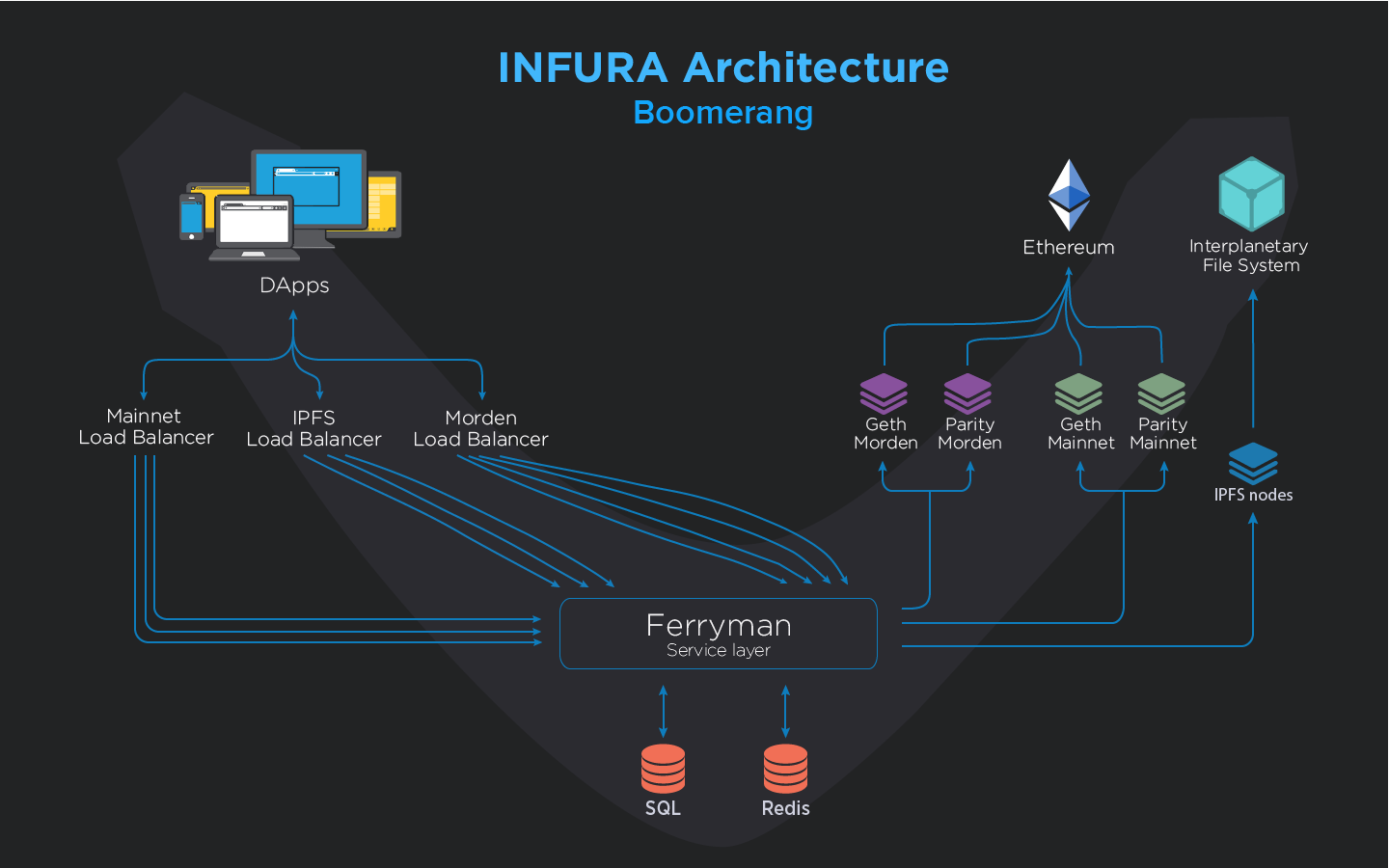 The ConsenSys spoke launched at Devcon2 in 2016 when Shanghai hosted the event. Since then they’ve made some modifications, including allowing public node peering to assist the ethereum network by helping new nodes to get up and running.

They also provide IPFS nodes for decentralized storage, so a dapp doesn’t need to require their users to have either an eth or IPFS node, although of course they can if they wish.

Augur, for example, uses Infura as a default node provider, so you can just download the Augur dapp and be good to go without needing a node, but when sharding goes out arguably ethereum’s capacity will depend on the number of nodes running.

If, however, it was 160,000 nodes running, you’d have 160 sets of 1,000 nodes. So linking, for the first time perhaps, the number of nodes to actual capacity as each set would have the same amount of capacity, that being 16 x 14 transactions a second or 160 x 14 tx a second, a significant difference.

Bitcoin Core developers used to worry that these sort of infrastructure providers effectively remove any incentive to run a node, but in ethereum there is Proof of Stake which provides block rewards when staking same as it does currently for mining.

The way Proof of Stake has been set-up is to encourage everyone to be different because punishments depend on whether other stakers are intentionally or unintentionally misbehaving.

As such, in ethereum there would be an incentive to run a node so as to stake to get the block rewards, with staking non-delegatable in ethereum at a protocol level, although arguably you can have staking pools but that would need to be balanced with the be different mantra.

Things like Infura therefore can provide a service for individuals who just want to use a dapp while incentives like staking can potentially provide the node infrastructure that would be needed for higher transaction capacity once sharding is implemented.

For now, of course, capacity doesn’t change whether there are 1,000 nodes or a million, but once casper and sharding (shasper) goes out, the higher the number of nodes the better you’d think.