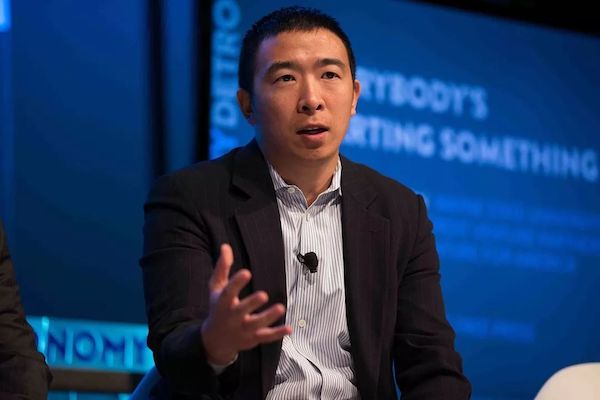 Andrew Yang, a 2020 Democratic presidential candidate, announced on Tuesday that his campaign “can now accept Bitcoin, Ethereum and other cryptocurrencies.”

His crypto donation page requires the completion of a form after which they send the crypto address with a maximum donation of $2,500 allowed.

They ask donors to not share the crypto address as they “are required by federal law to provide certain information about our donors.”

They further say “we currently accept Bitcoin and anything on the ERC20 standard,” making Yang the first presidential candidate and the first politician to accept ethereum based tokens.

He is one of many candidates seeking the Democratic Party’s presidential nomination for 2020, with his platform having much of what you’d expect from a left candidate, in addition to one key message.

The well connected New York businessman and former tech executive believes that automation might lead to riots in the streets.

“All you need is self-driving cars to destabilize society,” Mr. Yang says in an interview with New York Times before further adding:

“We’re going to have a million truck drivers out of work who are 94 percent male, with an average level of education of high school or one year of college.

That one innovation will be enough to create riots in the street. And we’re about to do the same thing to retail workers, call center workers, fast-food workers, insurance companies, accounting firms.”

His solution is a Universal Basic Income (UBI) of $1,000 per month for every single individual, costing $1,3 trillion which is to be paid by Value Added Tax (VAT).

VAT is a flat sales tax. Every time you buy something, businesses/individuals have to pay around 20% in VAT in addition to corporate taxes or income taxes.

It is one of the most regressive tax imposed by the state because it does not in any way differentiate based on income. Mr. Yang, who we presume is fairly wealthy, pays the same amount of VAT tax as someone on a welfare check.

This is one of the few taxes, if not the only tax, that even starving individuals have to pay directly or indirectly through higher prices.

It is also a tax that has faced much criticism from Trump who says it is used as an implicit tariff, especially in Europe, because exporting companies receive VAT rebate.

The proposal, therefore, sounds like giving it with one hand and taking it with the other, and while digitization will lead to workforce changes, the added efficiency will probably create more complexity which means more jobs.

Or as Vitalik Buterin, ethereum’s inventor, puts it, he is “destroyer of jobs, creator of better ones.” Something which history has shown previously as whenever there has been technological innovation, old jobs disappear but plenty of new ones are created around the new invention.

Conceptually the reason is probably because increased efficiency means we have an increased amount of resources so we can tackle more complex or more difficult problems which is probably why, in the west at least, even though we are plenty wealthy, working hours are going up rather than down.