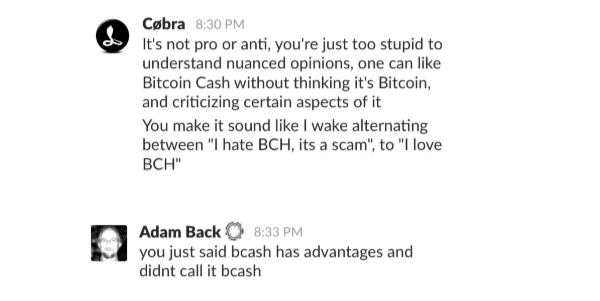 A little bit of drama is afoot in slacks, ircs, twitter and of course reddit over allegiances, loyalties, power and control.

It begun with Adam Back, Blockstream’s CEO, demanding change of ownership of bitcoin.org, the website created by Satoshi Nakamoto himself, or at least created when he/she/they were around nearly a decade ago.

It appears bitcoin.org, which housed and still houses the bitcoin whitepaper (now mirrored in many places including the blockchain), is owned or controlled by a pseudo-anonymous individual or team going by the name Cobra, the snake.

Theymos seems to have co-ownership or co-control, but facts are murky and recent events suggest it is Cobra who has full say and perhaps full control.

If you recall, bitcoin.org was used as a political tool by Theymos during the great scalability “debate,” with the site removing and then re-instating Coinbase and others and in effect acting as a propaganda arm of Bitcoin Core.

Yet with that debate now done and dusted, it appears Cobra is not quite toeing the party line. He seems to have said good things about Bitcoin Cash and that’s not something Adam Back liked.

The above featured image is taken from an exchange on slack between the two. There, Adam Back asks Cobra to transfer the domain to Wladimir van der Laan (aka wumpus), the current Bitcoin Core maintainer, or to Theymos.

Cobra refuses by replying that Cobra thinks Adam Back is too divisive to be Blockstream’s CEO and he should transfer control to Warren Togami.

A displeased Back asks if there is a risk Cobra might turn pro BCH and if that happens whether he promises to transfer the domain to Theymos. Cobra’s reply is in the featured image above, leading to the now mini-meme of you didn’t call it bcash.

As you recall, Blockstream pays a salary to many developers working on Bitcoin Core. Whether Andrew Chow (aka achow101) is one of them is unclear, as is unclear whether he hopes to become a Blockstream employee.

And we say it is unclear because there have been instances previously when a number of apparently independent individuals that seem to toe the party line quite enthusiastically then come out to say they now work for Blockstream.

Andrew Chow proposed this topic on IRC at a Bitcoin Core devs meeting this July 19th: “moving away from bitcoin.org more.” The following is part of the discussion:

“<wumpus> achow101: would that really make anything better?
<wumpus> achow101: are you seriously suggesting I should no longer update bitcoin.org and upload binaries there?
<achow101> yes
<achow101> wumpus: are you aware of the recent events on bitcoin.org?
<wumpus> acvaguely
<wumpus> so I think this will effectively reduce the number of downloads
<wumpus> I don’t care though, I don’t want to be involved in political stuff at all, I’ kind of burned out on that
<achow101> there’s ongoing work to move all of the bitcoin core stuff from bitcoin.org to bitcoincore.org
<wumpus> maybe the developer documentation too.”

The current Bitcoin Core maintainer seems to have an interesting definition of “I don’t want to be involved in political stuff at all” because he was the first to approve the proposal on github where he goes under laanwj.

That seemingly angered Cobra who said to Wladimir van der Laan: “Very political move! Why on earth should we continue to promote Bitcoin Core software if this type of nonsense gets merged?”

That’s where the story ends, at least where developments so far are concerned. What happens after is to be seen. Bitcoin.org could arguably become a bit more neutral, at least in companies they list, but most of the damage to a proper debate was caused by Theymos’ control of r/bitcoin, so these minor developments might not really have much of an effect.

It does however show that Blockstream maintains significant influence over Bitcoin Core, something which in theory should assist Bitcoin Cash if their arguments are correct.

The main one, as you might recall, is suggestions that Blockstream profits by little on-chain capacity through selling second layer products like Liquid, perhaps sidechains, or maybe other money making initiatives.

If that is true, then Bitcoin Cash should easily be able to compete by providing an excellent on-chain transacting experience, by developing dapps on BCH, by implementing code that improves the network like the recently merged Graphene in Bitcoin Unlimited, and so on.

That in fact was the whole point of the Bitcoin Cash chain-split fork, to give a competing space where all their ideas can freely be implemented.