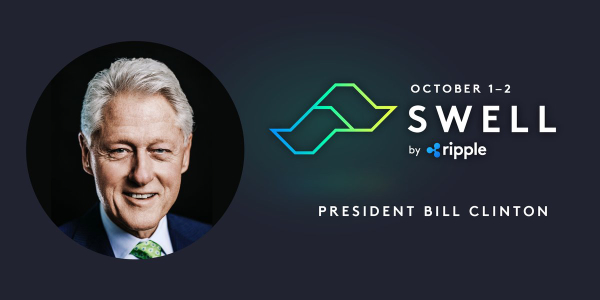 The former president of the United States of America, Bill Clinton, is to give the keynote speech at Swell, Ripple’s conference, this October the 1st in San Francisco. Ripple says:

“At a time when groundbreaking technology and regulation were often on a collision course, President Clinton helped usher in a period of extreme growth and adoption of the Internet, shaping what it is today.

He also established programs that bridged the ‘digital divide’ and brought new technology to underserved communities around the world.”

The only other announced speaker, besides Ripple’s CEO Brad Garlinghouse, is Gene Sperling, National Economic Council Director and Advisor under Presidents Clinton and Obama.

They apparently also plan to have a number of central bankers discuss what they’re doing with blockchain tech as well as policy makers to discuss crypto regulations with the only actual crypto discussions being in regards to remittance.

Bill Clinton is now the highest profile speaker to attend a crypto conference, although the crypto attendance of Google’s Sergey Brin might give him some competition.

What the former president will say remains to be seen, but the reaction has been mixed as one can expect, with Vitalik Buterin summarizing it in just one word: “wat.”

A crypto conference is of course usually a place you go to in order to learn things about cryptos, but the former president’s experience during the internet years might be helpful due to considerable parallels.

Back then they took a do no harm approach and allowed the internet to organically develop with little government interference.

Where blockchain tech is concerned, however, regulators have been quick to extend century old laws and apply them to very new things.

Chiefly, the Securities and Exchanges Commission under the leadership of Jay Clayton has in his own mind reduced tokens to mere digital stocks, so applying discriminatory investors prohibitions to Initial Coin Offerings that are now usually locked under walls with gates for only the very rich.

What Bill thinks of these approaches might be interesting to hear, but whether he has much awareness of these developments remains to be seen.