By evaluating the cryptocurrency dynamics during several past weeks, we can as of yet acknowledge the continuation of the development of the correction flat trend for main cryptocurrencies.

But soon this situation can change, and, after the support levels have been surpassed, the prices of the cryptocurrencies will again start forming the downward move impulses.

Some cryptocurrencies, being more volatile, will head down fasters, others – more slowly. I.e., it is still too early to speak about the forming of the long-term tendencies. 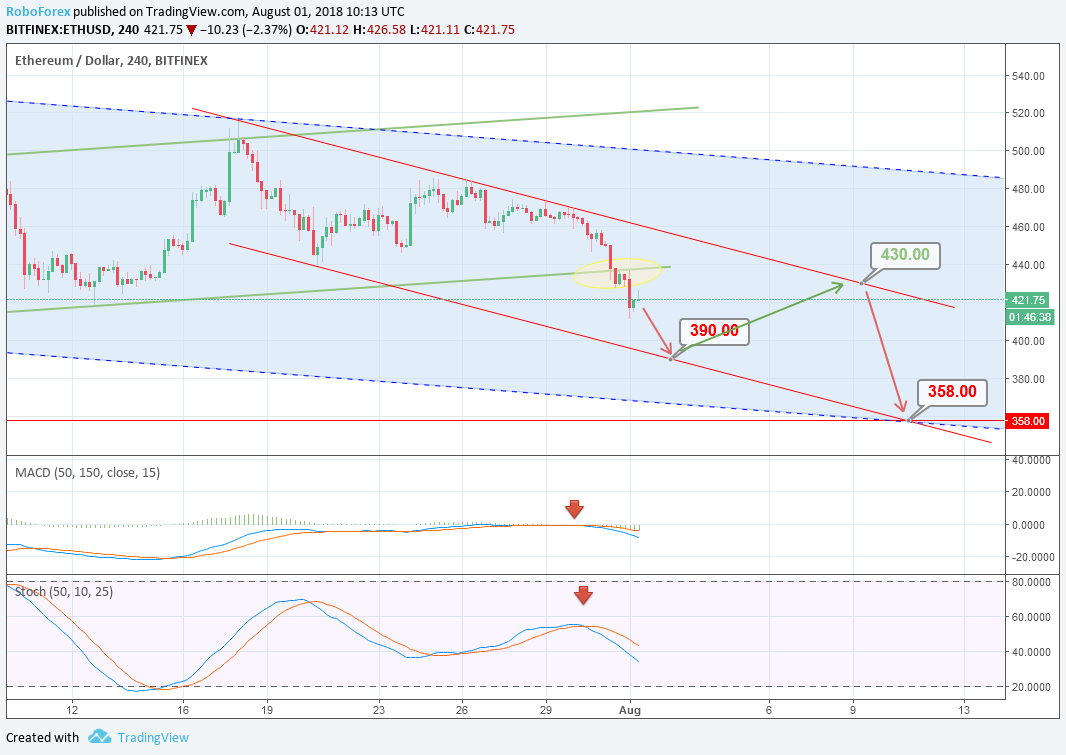 On H4, Ethereum demonstrates the breakout of the support lines of the correction channel, which may be the signal of the further development of the downtrend.

The reality of the breakout has been confirmed by forming of the Black Crosses in MACD and Stochastic. The closest target of the development of the downward impulse may become the support line of the short-term descending trend and the 390 point.

After this, the most probable scenario will be the pullback to the resistance line for securing the positions and testing of the resistance zone surpassed earlier. The target pullback level is 430.

The bounce off the resistance level will allow the Market to develop a downward impulse not just to the support line, but to the long-term fractal level of 358.

The further behavior and the decisions of the market participants near this level may form the medium-term flat trend while waiting for some new fundamental information. 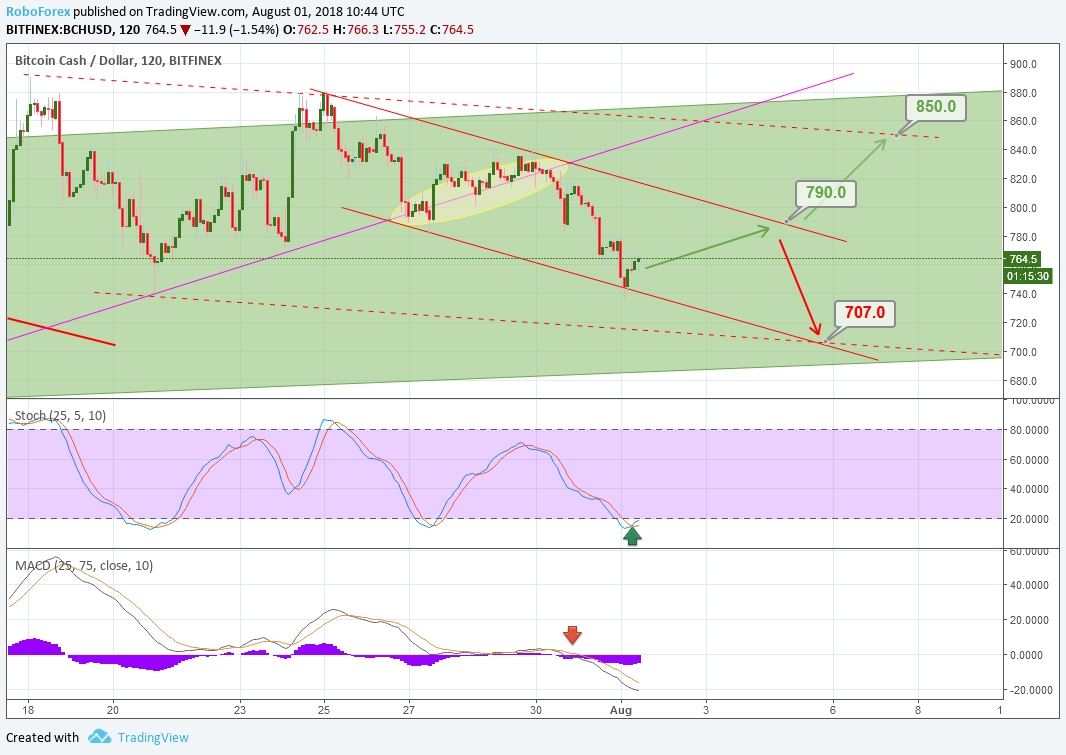 By looking at the technical picture of Bitcoin Cash on H2, we can see that the Market has only managed to test the resistance line of the correction channel.

Having bounced off this line, the price was able to test the local fractal support area, which may be the factor indicating the bearish trends on the Market.

Supporting the bearish trends is the descent of MACD lines into the negative zone and the forming of the short-term descending channel.

If we look at Stochastic, we will see the Golden Cross in the overbought area, which may signal a possibility of the pullback in the ultra short-term perspective.

Its target may be situated on the resistance line of the short-term descending trend at 790. In case of the break out of the support, the Market will continue to develop a correction flat trend, and the price may rise up to 850.

But in case of the bounce off, a new downward impulse towards the local support line at 707 can be expected. Next, the Market will set itself on the testing of the medium-term support line. 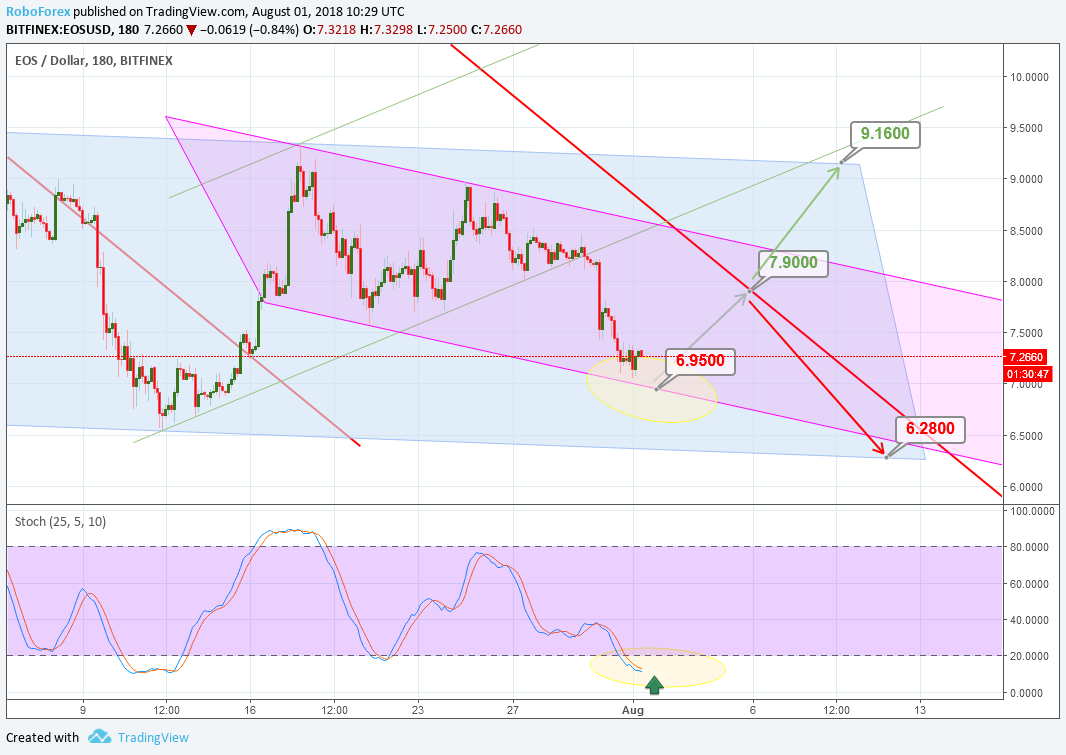 On H3, the EOS price is still within the correction channel. Alongside this, the forming of the new short-term downtrend is aimed at 6.28, the breakout of which will confirm the continuation of the development of the long-term downtrend.

In the short-run, the descent to the local support line at 6.95 with the subsequent pullback to the resistance line at 7.90 can be expected. This assumption will be confirmed by forming of the Golden Cross in Stochastic.

We cannot exclude the breakout of the resistance line and the growth of the price towards 9.16 either, which is why one needs to monitor the situation closely and to adjust the disposition accordingly. 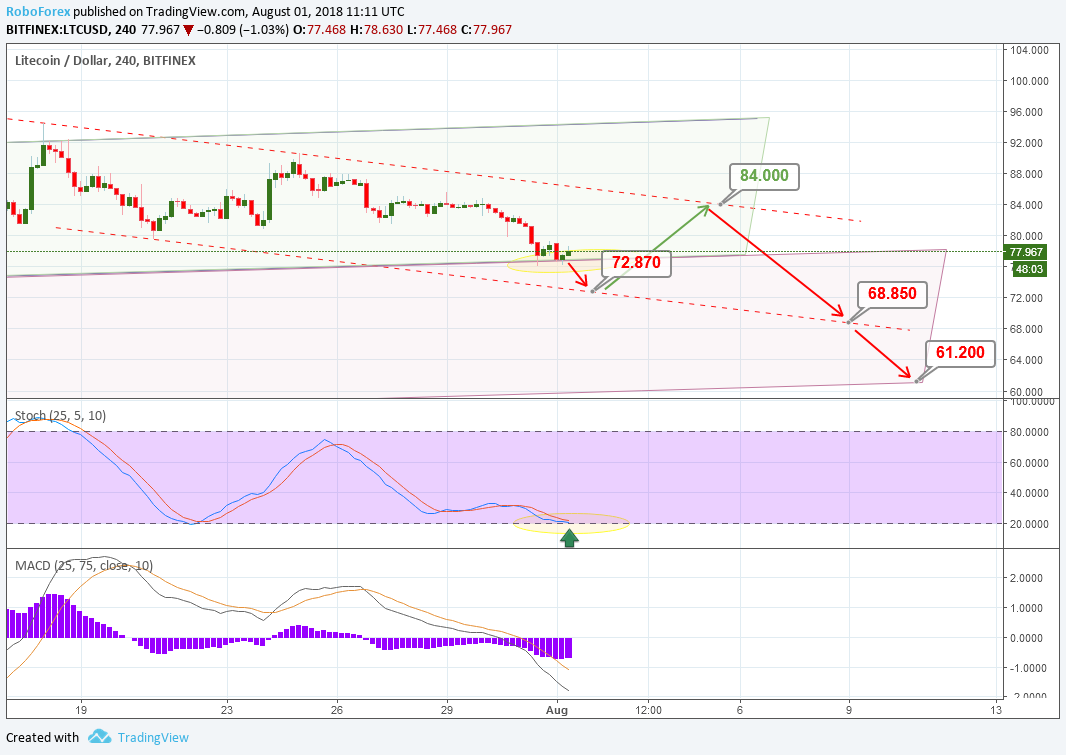 The technical picture for Litecoin demonstrates the forming of a new downtrend channel inside the medium-term correction channel.

The downmove of the MACD lines to the negative zone can serve as an indirect confirming factor here. In the short-run, the downmove towards the support line of the short-term descending trend at 72.87 is possible.

The possibility of forming of the Golden Cross in the overbought zone of Stochastic may indicate the potential pullback towards the resistance line at 84.00. The bounce off the indicated level will allow for the downmove towards the support level at 68.85 and later to 61.20 to be developed. 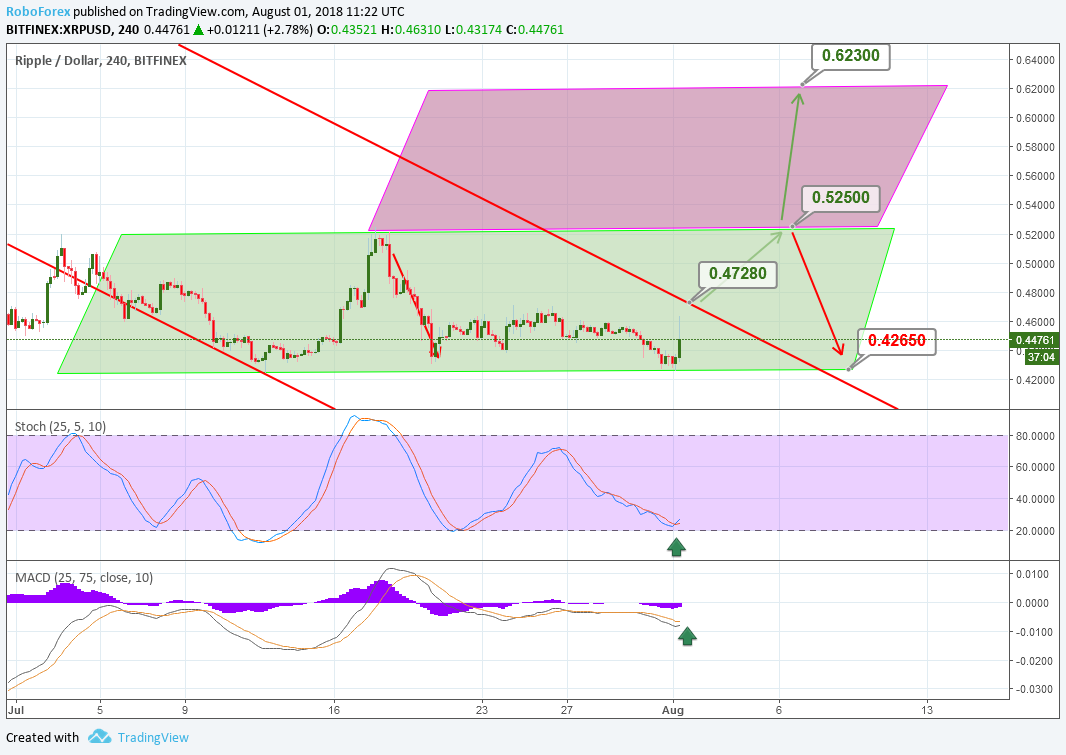 If we look at the dynamics of the development of Ripple price, from the point of view of the technical analysis, we can call the current situation a stable flat trend.

Having reached the support line, the price has bounced off it and formed a growth impulse. This impulse if first of all directed towards the resistance line of the projection channel at 0.4782.

Having broken it out, the price may continue to rise towards the resistance line of the current flat trend at 0.5250. The Golden Cross in Stochastic and a similar pattern on MACD will only confirm this assumption.