If last week the prices of the main cryptocurrency market instruments stayed within the limits of the correction channels, this week demonstrates a quite rapid, although local, fall. Again we have to state a fact of continuation of the long-term tendency.

But the longer and sharper the decline is, the earlier and closer the market will find itself on the levels interesting for the bulls.

As usual, there is a number of circumstances and conditions in order for the turning dynamics: these are the format of the configuration and the time. That is why in the coming days the bears will rule the market.

On H4, Ethereum continues to head down within the same medium-term channel. The market has successfully tested and surpassed the last meaningful fractal range between 405 and 406.

At the moment, Ethereum prices are successfully approaching the support level at 362. Alongside this, it is necessary to mention that the target of the nearest fall can also be the fractal at 358.

If we look closer at the charts of MACD and Stochastic, we can note the forming of convergences which may be a pullback signal after reaching the targets of the current downtrend.

The pullback target may be the resistance line of the main downtrend channel at 406. After the bounce off the resistance it is highly probable that a new descending dynamics impulse will develop. 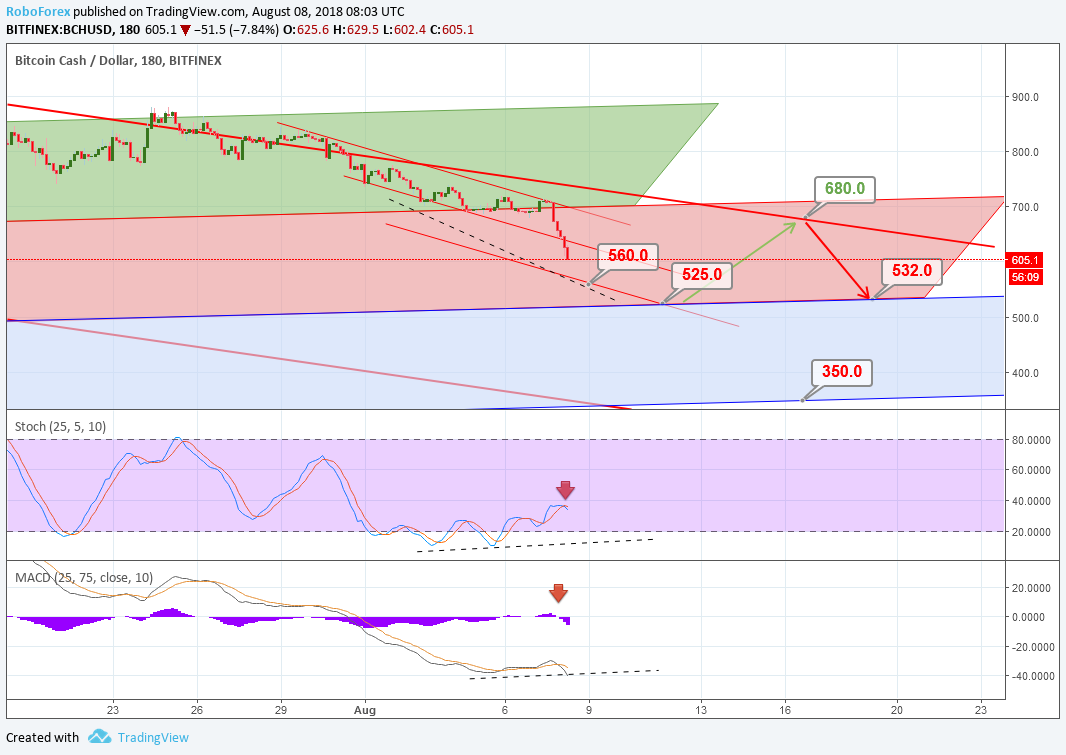 Looking at the dynamics of Bitcoin Cash price on H2 we can notice that the market has managed to reach the local descent targets.

Alongside this, the market has tested and broken out the support line of the previous correction channel, which is confirmed by the “Black crosses” on MACD and Stochastic.

Currently, the price is moving towards the support line of the lower projection channel. The main local target of the descending trend is 525.

The intermediate descent level may be that of 560 which is located on the support line of the short-term descending channel.

Considering the forming of the convergence on the indicator charts, we can assume that, having reached the support levels, the price will pull back to the resistance line of the long-term trend at 680.

After this, the most probable scenario will be the development of the new decline impulse towards the support zone at 532.

Currently, we should look at the price dynamics from different angles. On H4, we can see that the price has surpassed the support line of the short-term channel and is trying to break out the support of the medium-turn correction channel.

A strong decline impulse has been supported by forming of “Black crosses” on MACD and Stochastic. The exit of the price to the lower projection channel and its staying there will allow the market to start take aim at the support area near 3.38.

Considering the permanent movement near the resistance line of the long-term descending trend, we can assume the possibility of a pullback to 5.00, but only after having tested the target area of support.

After finishing the pullback and testing of the support, the next important target in the development of the descending tendency may become the parity level of 1.00, but this is the perspective for the nearest one or two months.

The technical picture of Litecoin demonstrates the movement of the price close to the resistance line of the long-term descending trend.

It is important to note, that the descent impulse has surefootedly surpassed the support level of the previous correction channel and the fractal minimum at the level of 72.20.

Currently, the price of the cryptocurrency is approaching the local target at 61.60, which is located on the support line of the projection channel.

The presence of the forming convergence on Stochastic can indicate the possibility of a pullback to the resistance line at 68.45. But the fractal resistance at 72.20 may also be the target of a short-term pullback.

The “black cross” on MACD and the location of the lines below zero indicate that the descending tendency is stable. This is why after the pullback has finished it is highly probable that the new upward impulse towards 46.00 will be formed. 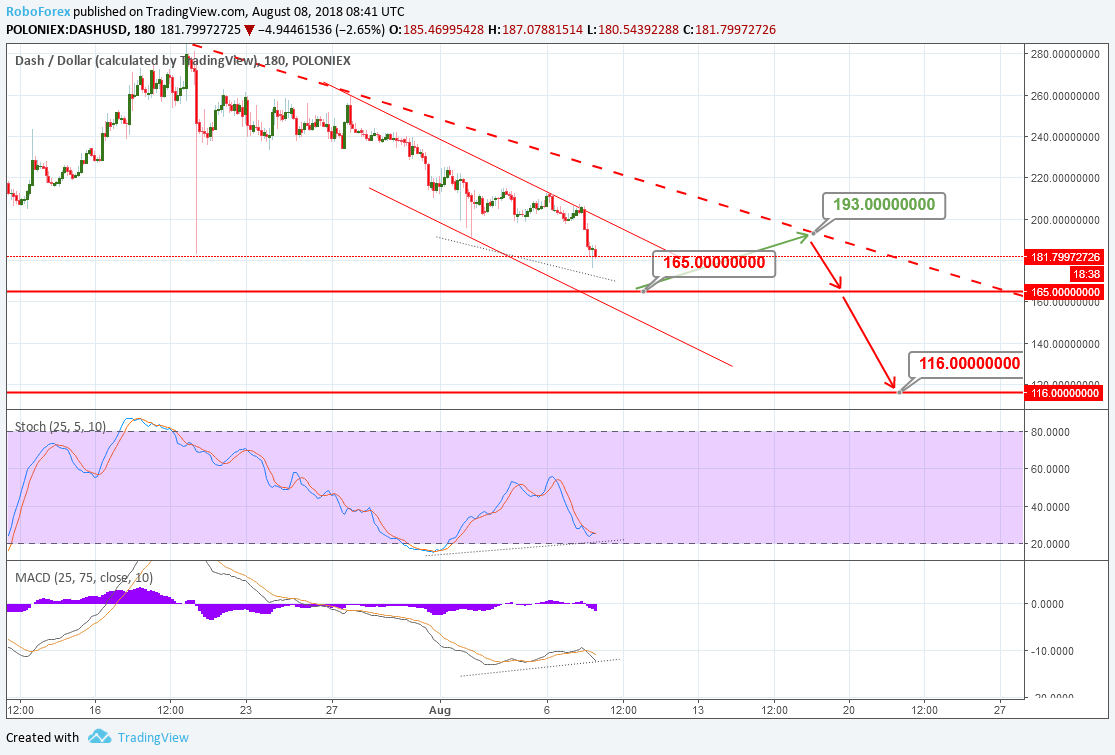 If we look at the dynamics of the development of Dash prices on H3, from the point of view of the technical analysis, we can call the current situation a stable descending trend.

Having surpassed the last local minimum, the price is moving towards the fractal support level at 165. This being said, on MACD and Stochastic we can see the forming of convergences which may be a signal for an upward correction.

Its main target may be the resistance line of the main descending trend – 193, in particular. The bounce off the resistance may allow the market to develop a new downward impulse with its possible target being the fractal support level at 116.